Of all the things I thought I might buy in Poland as a souvenir of our visit in 2018, I never in my wildest dreams thought I would buy a grave! Now that I have your attention, let me start at the beginning…

Like most of us who travel with PolishOrigins to the villages of our ancestors, I hoped to find tangible evidence of their existence beyond a document – like a dwelling, a farm, or perhaps a grave stone. To that end, we spent hours searching through the cemeteries in each of the six ancestral villages we visited with our PO Guides. We took hundreds of photos of graves with my family surnames, but none of them had the names of my specific ancestors.

After not finding any of my ancestor’s graves in the other villages, I did not hold out much hope of finding what I was looking for in our last stop -my paternal grandfather’s village of Dynów. But, we walked through the cemetery anyway, and we took pictures anyway. We also tried to get access to the civil archives in Dynów for birth, marriage and death records, but the archives manager was not able to help us very much. They are under very strict privacy laws – more so than in the other areas of Poland we had visited. But, our brave guide, Lucjan, persisted and managed to get us a meeting with one of the parish priests to look through the church records.

After much conversation and negotiation with the priest, this yielded some results. It was during these conversations, that Lucjan learned something: the Catholic Church in Dynów had given over the management of the cemetery to the town. This was unusual, but off we went to the next clue in the treasure hunt. Lucjan took us to the town’s administrative offices to see the cemetery manager, “Mr. O”, and ask about possible burial records for my ancestors. I did not hold out much hope. I believed too much time had passed and the burial information and grave locations would be lost forever.

Mr. O listened to us patiently. He then told Lucjan that he had been working for years gathering information about all who were buried in the Dynów cemetery and entering it into a searchable database. We were speechless! Mr. O proceeded to search for every name on my list of family members and we found all but two. Not only was he able to provide me with death dates for each of them, but he also knew the location of their graves. This was jaw-dropping! His generosity was truly amazing at this point, but then he offered us even more. 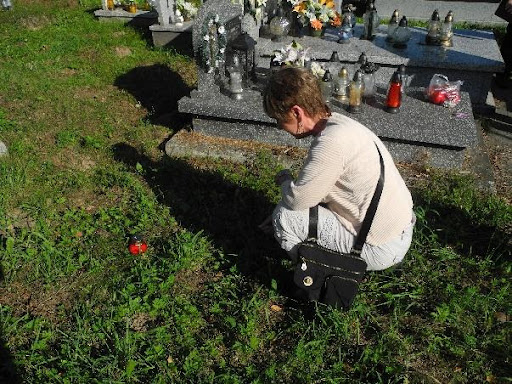 He offered to take us to each of the graves so I could visit them and place lamps on them.

All of the graves we visited were simply unmarked plots of green grass with no headstone except for one – my great uncle Jakub. Jakub’s grave was a crumbling cement slab with a cement cross, but with no inscriptions. As we walked back to the cemetery office, I inquired about the possibility of placing a family memorial plaque somewhere in the cemetery listing the names of my family members buried there. Once again, Mr. O went above and beyond my request.  He informed us that the cemetery was running out of space for new graves, so they were marking unclaimed graves with the intent of reusing them. He explained that in this town graves were not purchased but rather were rented for 35 years. At the end of 35 years a family member would need to renew that lease agreement and, if unclaimed, the grave would be reused. He then asked me if I would like to take over the lease of Jakub’s grave. Now this was something I was not expecting at all! After my initial surprise, it took me a few minutes of discussion with my husband before saying yes. I figured I could not rescue all of my family graves, however I could rescue one and possibly even rebuild it as a memorial for the entire family. So with the help of our PolishOrigins guide, Lucjan, off we went to the cemetery office to fill out the paperwork and then to the local bank to complete the bank transfer. Within an hour, I owned a grave! 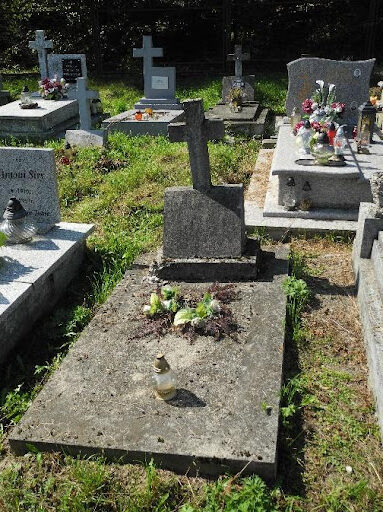 I soon realized this was only the beginning of our adventure. The next stop was to the local tombstone maker. We arrived at their workshop, and when introducing ourselves discovered that the tombstone maker’s last name was the same as my family surname – possibly a good omen. We explained what I wanted and what we were trying to accomplish. We then went back to the cemetery so that I could pick out granite colors, tombstone shapes, lettering type, and other details that were communicated through our interpreter Lucjan and recorded as notes by the tombstone maker. The maker also asked us to provide him with a written document of the exact words and their layout for the headstone before leaving town. Later that evening, Lucjan helped me with that task, and delivered the document to the maker the next day. We left Dynów with the agreement that once we got back to the USA, we would continue working long distance with the tombstone makers with the help of Lucjan of course. 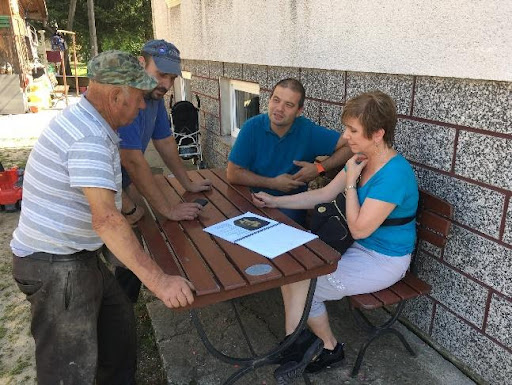 I wish I could say that everything worked out smoothly after getting home, and we were able to accomplish our goal of rebuilding the family memorial – but that is not how it turned out.

The tombstone maker went silent. They were not returning calls and they were not answering email. This went on for several months. It seemed that for reasons we did not know, this maker was not going to work out. But I was determined to keep trying. I realized I needed to appeal to a higher power – the owner of PolishOrigins, Zenon. I contacted him through email telling him the situation and asking if he would be interested in taking this on as a special project. After negotiating some costs, we were in agreement and set out to make this project a reality.

Now in year two of the project, Zen and I experienced many highs and lows – too many to detail in this account. To summarize: after two visits to Dynów for Zen to manage the project, and a second tombstone maker who also became unresponsive, Zen finally found a third maker who had an excellent reputation and serviced the area of Poland that included Dynów. We passed on all of the details, once again, to the new maker and received a new price quote. Hopes were high once again. But then, just as work was to begin – COVID arrived. Understandably, the project was delayed once again.

Now, we were in year three of the project. I was seriously beginning to lose hope of ever realizing my dream of rebuilding Jakub’s grave as a family memorial, but fortunately for me, Zen never gave up. During one of the small “breaks” in COVID, the weather cooperated, the makers schedule lined up, and I received news from Zen via email that the makers were going to Dynów to tear down the old grave, prepare the surface, and pour the foundation! I was so happy, I almost cried! 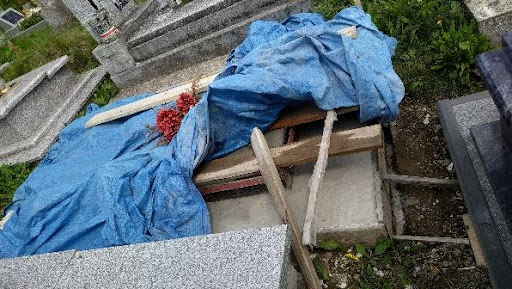 On Friday, July 9, 2021, I was doing my usual morning routine which includes checking email, and I found one from Zen. I figured it was another update on the project delays with another target date. Instead, I found a puzzling note from Zen that I didn’t understand, so I wrote back asking him to clarify. The next morning, Zen replies “it seems that yesterday I wanted so quickly to share the news with you that I didn’t attach the pictures from my phone!” And, there it was – pictures of the finished memorial! It is difficult to describe my feelings in that moment – a mixture of joy, relief, accomplishment, tenderness, tears, a weight lifted, dancing, and completion. The end result was everything I had hoped and more. The craftsmanship was beautiful, the design and overall esthetic sleek, simple, yet elegant. 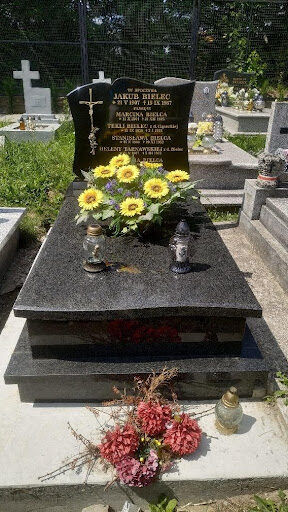 The finishing touch was when Zen kindly drove to Dynów and placed flowers and 2 lamps for me on the grave. 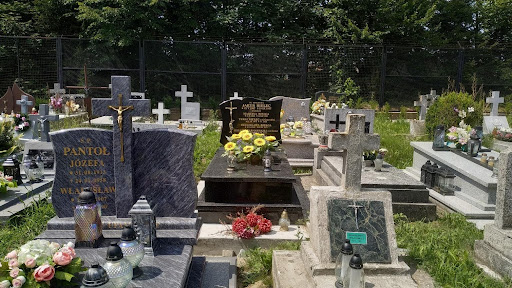 After 3 years and many ups and downs, it was finished. I felt my ancestors smiling, especially Dad. My Dad grew up not knowing his father who died when he was only a baby. He knew nothing about his family in Poland, and grew up believing he had no other family. Now, I think my Dad, looking down from heaven, is proud of what I have done in memory of his family with the help of PolishOrigins.

On a practical note, the rest of the details involving payment by bank transfer were simple, easy, and completed without incident. As you look at the pictures of the finished memorial, there are two quotes in Polish at the bottom of the headstone. The first basically reads “from the Bielec family USA, always remembered” and “After the hardships of life, rest in the Lord” 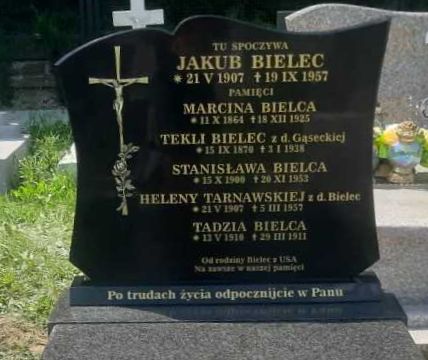 It is with a grateful and overflowing heart that I thank Zen, Lucjan, Mr. O, and the third tombstone maker, but most especially I thank Zen, because without his vision, his perseverance, and his management, it would not have been possible. Thank you, my friend, for making my dream a reality!

What dreams do you have regarding your Polish ancestry? Just tell PolishOrigins. You may be surprised at what could happen.

(See also Paying it Forward: The PolishOrigins Ripple Effect. written by Cynthia after her visit in Poland in 2018.)