The following tells some of the history of the great-great grandfather of Evelyn Clor and Charles Chase. 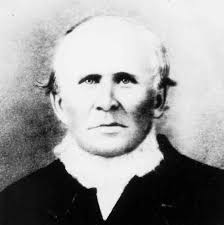 At the tip of the “Thumb” of the Michigan’s Lower Peninsula can be found Huron County. Within this county is Paris Township which contains the historic town of Parisville. Parisville is, arguably, the first Polish community within the United States. One of the founders of Parisville was a Polish farmer by the name of Francis (Franz) Polk who left the tyranny of Poland to provide a better life for his family.

Few records have been found concerning the migration, in 1855, of the Polks from Poland to the U.S., via Canada. We do know that the family left Hamburg, Germany on 18 or 19 April, 1855 aboard the ship Archimedes. The Archimedes then sailed to Hall, which is on the east coast of England. The typical route would then take them by train to Liverpool, to catch a ship to North America. It is most likely that they took a ship to Quebec City in Canada. Unfortunately, Canada does not have any records for sailings to Canada before 1865.

Upon arrival in Canada, probably mid-June 1855, and not speaking the local language, they had to depend on an agent to find employment while they determined the final destination for their family. Employment involved helping to build some of the railroad systems that would help the Canadians enhance travel between cities within Canada and ports within the U.S. where shipping could occur during the winter months. The port of Quebec closed during the winter.

The primary Canadian railroad project involving the Poles in the 1850s, was The Grand Trunk Railway from Toronto westward to Sarnia. This railway was started in 1853 and completed in mid-1856 and provided relatively easy access to Michigan.

Some reports indicate the Polish families initially lived in shacks/cabins along the Canadian railroad tracks. At times, the men probably had to live in box cars so they could easily move with the progress of the railroad projects. This work allowed the Polish families to gradually accrue funds with which they could eventually purchase land for farming.

We know that the Polks had moved further west within Canada by some time in July. Josephine Polk gave birth to their 9th child, Francis (Franz) Polk, on 27 July 1855 in Paris, Ontario, Canada (in an area called “Canada West”) which is about 60 miles southwest of Toronto. We therefore know where the Polks lived during most of their stay in Canada.

Somehow, these railroad builders received word that cheap land, with great farming potential, existed in the “Thumb” region of Michigan. Francis Polk, along with others, such as Anton Slawik, Francis Susalla and the step brothers Thomas Smielewski and Ambrose Ciechanowski (step-father was Casper Smielewski), explored this area (it had been officially surveyed around 1835) for its possibilities. Through their foresight and very hard work, they were eventually able to develop an area of thick forests and marshes into fertile farming land similar to that which they had to leave in Poland. These hearty pioneers drained their marshes using methods they learned while working on the railroads in Canada, where the railroads periodically encountered wetlands in the path of the track system.

The actual timing of the immigration to Michigan was helped by John Susalla, the son of Francis Susalla. During the fall of 1855, John was working in a quarry where they prepared the local rock to be used for railroad beds. John was working with a Frenchman with whom John did not get along. Apparently, the two men had a significant disagreement as to how the rock should be quarried. The Frenchman threatened John by raising a pick over John’s head. Before he could bring it down, John swung his shovel, hitting the Frenchman in the throat, killing him. John was thrown in jail, but escaped that evening. Shortly after his departure, it was found out that Mary Polk (daughter of Francis and Josephine Polk) was pregnant. John and Mary were very close friends. Polish Catholics looked down on illegitimate births. Therefore, the Polks and Susallas followed John, who had taken refuge in Michigan. John and Mary were married in Michigan and eventually had 15 children. Their first child, Mary, born in June 1856, was the first Polish child born in the new territory.

It is believed that this early Polish group probably went from Sarnia, Ontario by boat to Detroit, MI in order to purchase land. Subsequently, they most likely took a boat from Detroit to White Rock, in the “Thumb”. They then had a tortuous walk through dense wilderness to the area now known as Parisville. Parisville is located in Paris Township, which received its name from the city of Paris, Ontario where a number of Poles resided until their final move to Michigan.

The chart below shows the names of the Poles who were the first to purchase land in Paris Twp.

According to Certificate # 32512 of the Land Office in Detroit, MI, Francis Polk, of Richmond County, Canada West, on 16 September, 1856 purchased from the U. S. Government the W ½ of the NW ¼, of section 23, Township-15N, Range-14E, containing 80 acres, for 50 cents per acre, amounting to $40.00 gold. Then, on 1 July 1857 Francis Polk received the official Land Patent for the above land from the US Government in “Washington City” Francis Polk was the second Polish settler to obtain a patent for land in Paris Township.

Upon arrival in the wilderness of Michigan, Francis and others erected wigwam-type structures as temporary shelters. Upon the felling of trees, they built crude log cabins to withstand the cruel winter weather. Some land was cleared for farming, but trees were also important in order to supply lumber mills that were gradually built in the area. In 1871, a massive fire storm destroyed about 2500 square miles of forests in the region. Many homes, animals and some residents perished in this fire. A side benefit of this fire, however, was that it was a means of clearing the land to allow farming to become a more important industry. A smaller, but still devastating fire occurred in 1881.

Becoming a citizen of the United States was very important to Francis Polk. On 3 May 1858 at the Circuit Court in Detroit, Wayne County, Michigan, Francis filed Declaration of Intent papers to fulfill that dream. Francis renounced forever his allegiance and fidelity to the King of Prussia under whom he had been a subject.

Josephine Slawik Polk died on 20 December 1880, at age 61, in Paris Township, Huron County, Michigan. Cause of death was inflammation of the lungs.

Francis Polk died on 1 December 1906, at age 94, in Paris Township, Huron County, Michigan. Cause of death was old age.