Today was very different than yesterday. Rather than focusing on death, hardships, and war at a very sad place, I journeyed to 2 towns were my ancestors lived over 100 years ago. Bolesław/Pawłów and Odrzykoń.

As Amy and I left our hotel room at 8AM, our guide, Zenon, was already waiting for us in the lobby.  We quickly hopped in the car and set out to Bolesław/Pawłów with no expectations and no specific plans. I simply hoped that I would find something new on the Janik side of my family…little did I know…

We drove into Pawłów and after viewing a few of the homes, went to the house where I was told a “Janik” lived. My luck, no one was home. We lingered for a few minutes, took a few pictures and were getting back into the car when Zenon noticed a neighbor backing out of the driveway across the street. Zenon flagged him down and asked if he had an information on the “Janik” that lived there. The man stated that the person who lived in the house was down the road visiting his sister. If we were interested, we could follow him and we would show us where the house was located. Of course we agreed.

Arriving at the “Janik’s” sister’s house, we noticed a man outside in the driveway. Zenon explained our situation and the man went to get his sister. Zenon, the sister (Jadwiga), and her brother (Bogusław) had a very detailed conversation. I know about a dozen words in Polish, but was getting very excited with all the “tak, tak” (yes, yes) going on. Eventually, everyone’s expression changed. Zenon verified facts with me, asked questions of Jadwiga and Bogusław, however, even though we share a common surname in our family trees, I had no record of a Kazimierz Janik (their grandfather). Jadwiga seemed very upset and explained to us that she wished her father was still alive. For sure he would be able to shed light on our issue. Unfortunately, he passed away 5 years ago. Since neither of us had any additional information, we politely said our goodbyes.

Driving around the village, we received some information on my great-grandfather’s sister, Maria. I have a marriage record showing that she married Franciszek Słoń in 1927. We were told that there was a Słoń family living just down the road in the next village (Kanna)…we decided to investigate; however, after speaking to that man in the next village, we realized we were at another dead end. Other than giving us directions to a few Słoń  family graves in the local cemetery, he did not know any information that would help us make a connection. Having struck out twice now, we decided that we would visit the Bolesław Cemetery and see if any of the Słoń graves were of Franciszek or Maria.

We decided to split up in the cemetery and search for the Słoń graves (and other family names). It had been about 45 minutes since we left the Janik house and about 30 pictures of gravestones later when I realized that our guide was talking to Jadwiga and her brother in the cemetery. I was amused that we’ve only been in the village for an hour and we were already running into people we “knew.” I continued taking pictures and made my way towards the three of them. When I got to Zenon he translated their conversation. After we left the Janik house, Jadwiga explained that her knees were weak. She was unable to stand, couldn’t think straight, and could not help but think about her father and grandfather. She made a phone call to a cousin and was told that she NEEDED to find us and figure out if there was a relation. The cousin suggested finding Kazimierz’ birth record in the local parish record book. From this record we could find out who his parents were and compare those names to the family tree that I had with me.  Jadwiga insisted that we leave the cemetery and follow them to the church office. “Yes ma’am!”

I was laughing inside seeing her impatience. She was ringing the doorbell, knocking on the door, and then doing the same at other doors. Apparently I am not the only one that gets excited over genealogy. Finally the priest answered the door. He was meeting with another parishioner, but would be with us in a few minutes when he finished. You could feel tension as our group of 5 crowded into the small entry way. Jadwiga, Bogusław, and I were very quiet keeping our conversations to short comments about the church, weather, our trip, etc. When the priest was available, the 5 of us crowded into his small office (which had a desk without a computer – I also found this amusing). He stated that he generally does not do genealogy requests because it is so time consuming; however, since Jadwiga and her brother belong to the church, and because they brought a possible American relative along, he would try to help us.

He grabbed record books and began searching. Book 1 = no luck. Thinking the birthdate they had for Kazimierz might be incorrect, we checked a year earlier and successfully found the record. 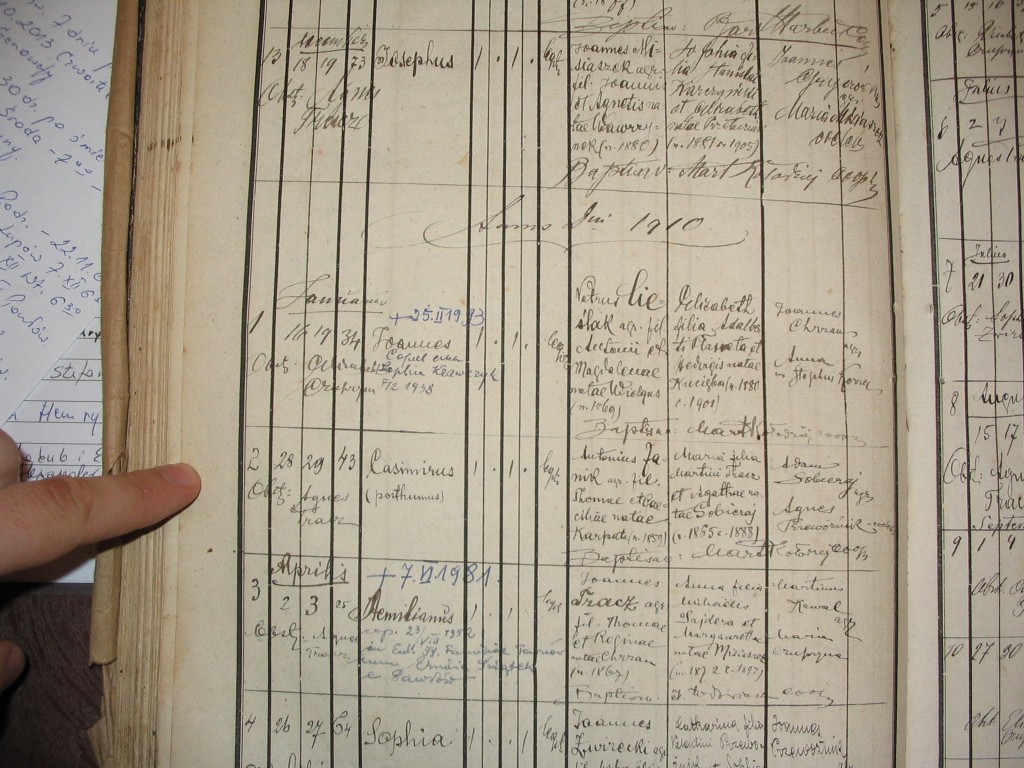 Now the moment of truth….who was his father? mother? Would we be able to tie him into my tree? Where we going to find two more random Janik names? The best way I can describe this moment is by referring to the Jerry Springer show. They perform the paternity tests and everyone waits on the edge of their seats for the results. Silence. No one spoke. Jadwiga, Bogusław, and I were on the edge of our seats. Tell us! Finally, the priest looked up from the book, smiled, and said “Antoni Janik i Maria Tracz!” Kazimierz was my great grandfather’s younger brother. After a collective sigh, we were all smiling. I had found my 2nd cousins, once removed. As I thought about this, it made perfect sense why I didn’t know about Kazimierz. I didn’t have him in my family tree because the records that are publicly available stop at 1901 – Kazimierz was born in 1910.  There are probably other children that I don’t know about as well. We provided a donation to the church for the priest’s help and decided that we would all visit the inside of the church together. 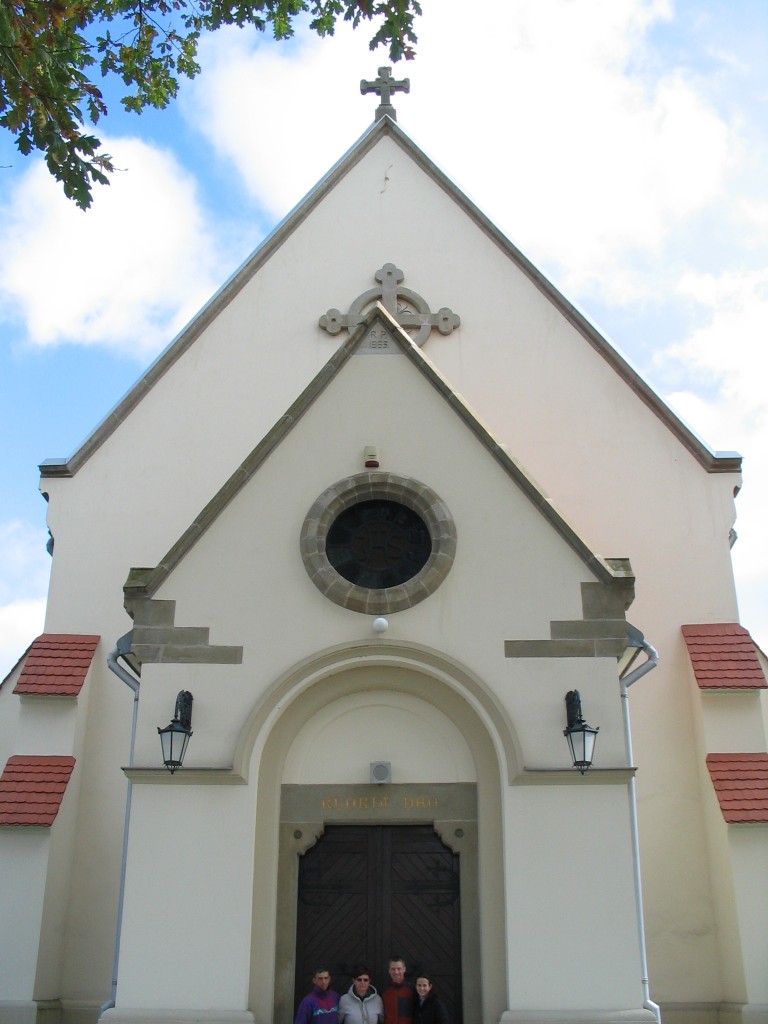 Of course the church was locked. Hesitantly, Zenon went back to ask the priest to open the church for us. Were we pushing our luck? When he returned, the priest himself was with him. Apparently, providing the donation to the church was a very good idea. We entered the church, which had been rebuilt, and began to look around. The priest began telling us about many of the features of the church – our own private tour. Inside, I was able to see beautiful pieces of artwork as well as altars and  parts of the church dating back to the 16th century. Most impressive was viewing the baptismal font, from the 1600’s, in which members of my family have been baptized going back hundreds of years.

Upon the conclusion of the tour, we exited and took many pictures outside. Amy and I had brought a few gifts with us and were able to give a few things to Jadwiga and her brother. 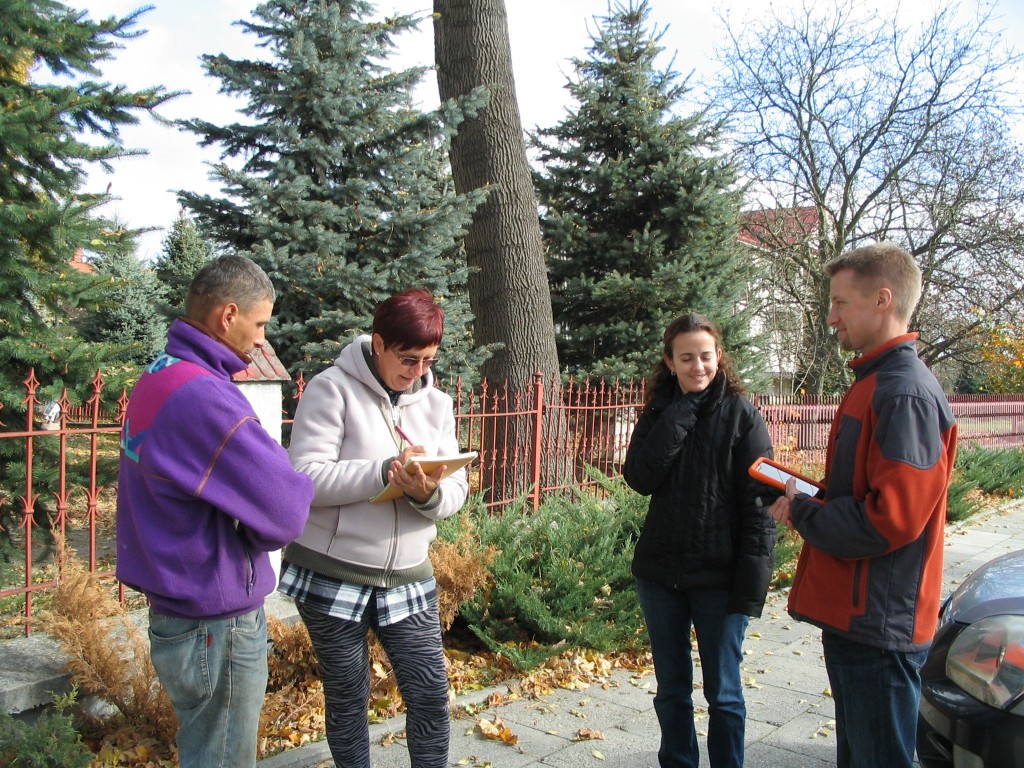 This was the first time that we were able to chat. As Jadwiga began to explain how excited her father would have been to see this, she began to cry. This was quickly followed by her brother and myself. What a moment! After years of research on my part and a series of uncanny coincidences this morning, we were talking to family members that had been lost exactly 100 years ago when my great grandfather left Poland for the United States in 1913. The way that this morning played out gives me the feeling that we are not working on simple coincidences however. This feels like much more than something simply serendipitous. What are the chances that we were at the Janik house when he wasn’t home, ran into the neighbor who knew where he was and offered to bring us there, walked away once not being able to find a connection, the chance that Jadwiga called her cousin who pushed her to find us, the chances that we were still in Bolesław and that they actually found us, the chances that the priest was there, offered to search for the record, etc. etc. To me, this is unbelievable. Mission accomplished! 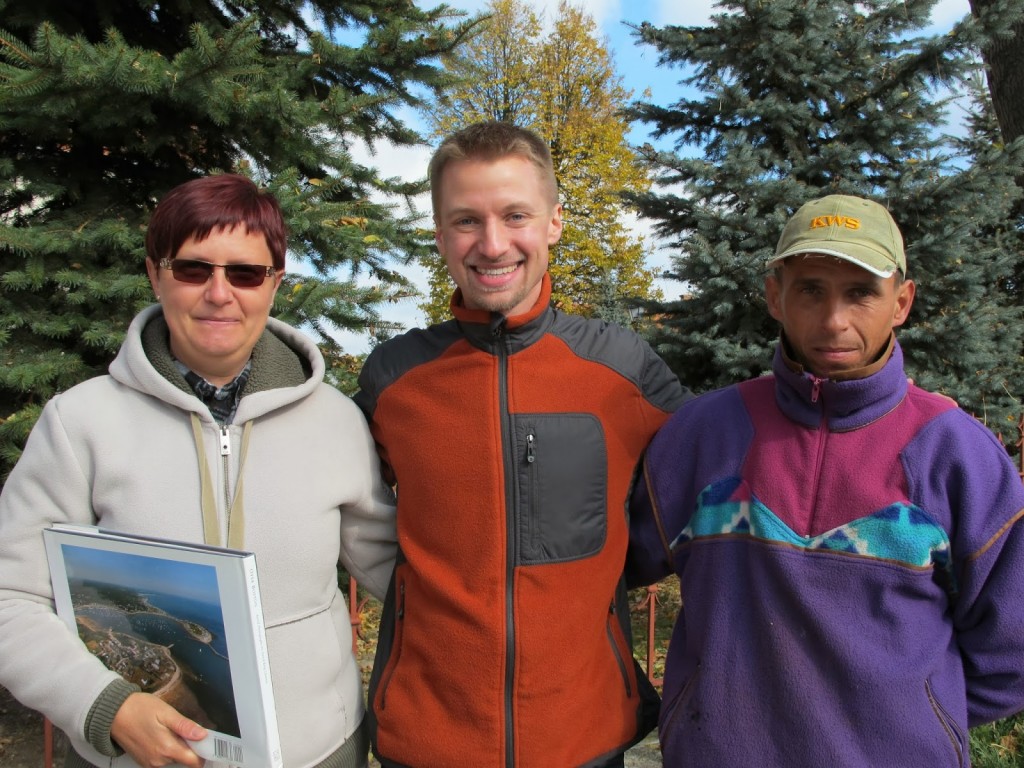