After finding these relatives in Pawłów, I could have gone home content. I cannot fathom how anything could top this experience. Leaving the village, we would now travel to our next location: a village where my maternal grandfather’s family lived – Odrzykoń. We had originally planned to go to Odrzykoń tomorrow (Sunday), but when Zenon called to speak to the priest, he stated that it would not be possible for us to meet with him this Sunday. Sunday’s are generally very busy and he had an event to attend after the Sunday masses. Zenon, always able to adjust plans at the drop of a hat, made an appointment for us to meet with him after a 5PM rosary mass that evening (Saturday) instead.

In order to provide a bit of background on my research of the Danek family. My great-great grandfather, Tomasz Danek, came to the United States around 1887. This was significantly earlier than the wave of Polish immigrants that came in the early 1900’s. Because he traveled here so much earlier than the large influx, immigration records were not as detailed this early in the process. For example, Ellis Island records from 1910 will usually list a nearest relative in the country where the immigrant is coming from. It will also list the name of the person the immigrant is going to see in the United States, how much money they are carrying, what language they speak, etc. Because Tomasz came over in 1887, I can find a handful of Tomasz Danek’s entering the country, but cannot tell which is the correct one due to the lack of specific details. When he arrived, the only information on these lists was name, age, and perhaps a generic town or place where they are coming from (i.e. Galicia).

I searched high and low for any possible information on Tomasz, but could not find a birth location listed on any document. I searched birth records of children, United States censuses, the social security administration, etc. etc., but continued to come up empty handed. After searching everywhere I could think of, it dawned on me that I had never obtained his death record…which would have been held at the local church. Of course, when I finally obtained this record (after searching every other place I could think of), it listed his town of origin as Odrykoń. Success, until I realized there is more than one Odrykoń in Poland. In short, after asking questions of many people and doing some additional research,  I took a guess and narrowed it down to one. This is the Odrykoń that we would visit this afternoon.

Since we were early for our meeting and mass was still going on, we decided to visit the local castle – Kamieniec. This castle dates back to at least the 1300’s where it is first mentioned in records. After our brief tour, we returned to the church for our meeting. 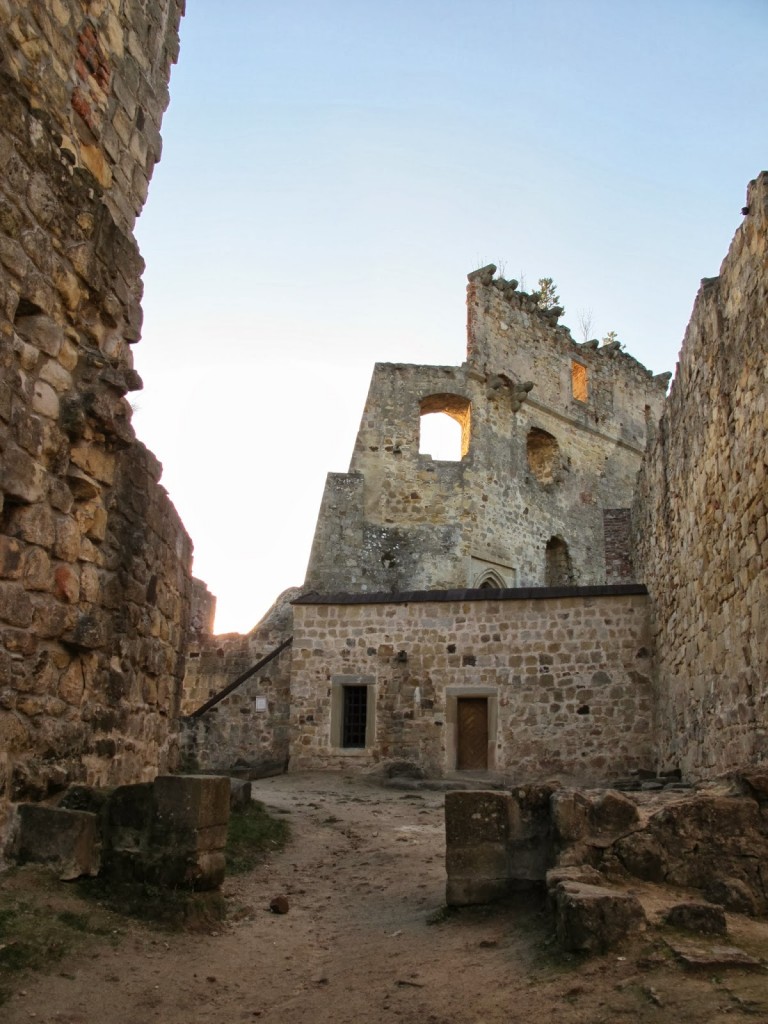 As mass ended, Fr. Rydzik exited the church and Zenon began to explain why we were there. I obviously did not understand the whole conversation, but Fr. Rydzik’s body language did not seem promising. This might be a very short visit indeed. We followed him to the church office where I was scolded for not speaking Polish. Of course, Zenon had to translate my scolding for me! After quite an extensive conversation, Zenon asked about the birth of my great-great grandfather, Tomasz Danek. I had a birth date for him so Fr. Rydzik went looking for the appropriate record book. 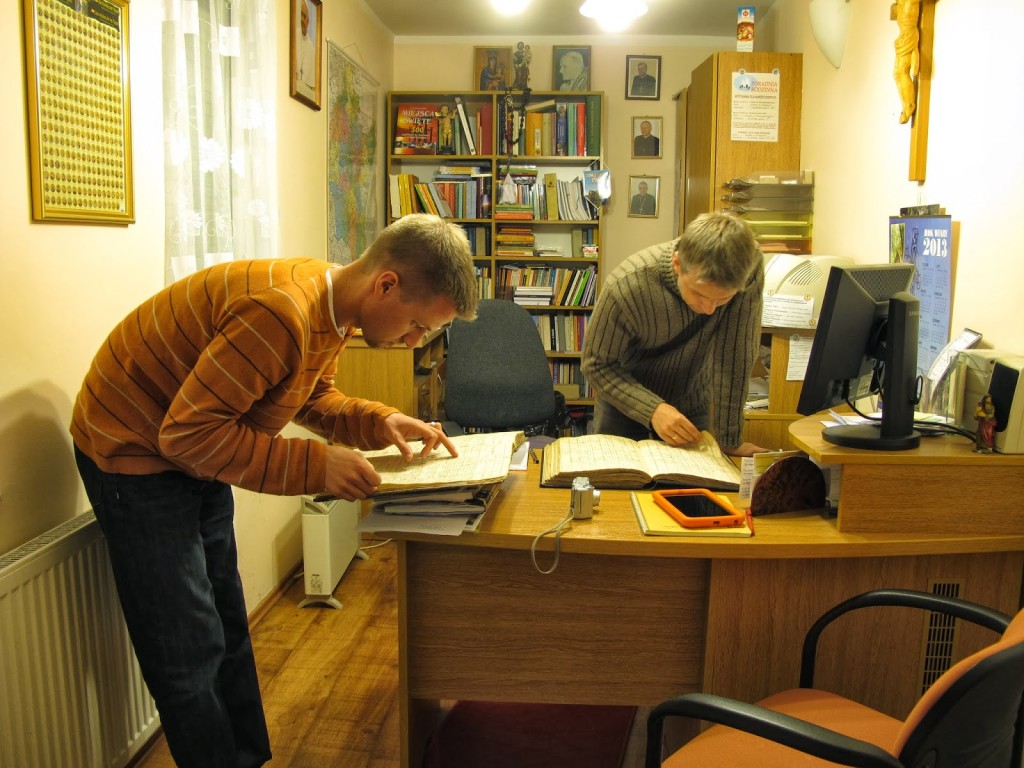 We searched page after page of this book, and had no luck. The priest seemed to be looking more and more displeased with us. All I could think about was that I had selected the wrong Odrykoń. How disappointing! Suddenly, a sound I understood and welcomed: “Tak, tak, tak!” My heart jumped. November 11, 1859 – there it was. We all exchanged glances and smiled!

Fr. Rydzik allowed Zenon to photograph the record and then proceeded to inform us that he had another appointment and was not able to stay any longer. I’m not sure what happened next, but Zenon and Fr. Rydzik were having quite the conversation. Polish phrases were flying back and forth and I had no idea what was going on. Was he kicking us out after only 15 minutes? Their conversation was interrupted by a phone call that Fr. Rydzik placed to some woman on the other end of the phone.

Fr. Rydzik seemed to be short with the woman and the woman didn’t sound very happy on the other end either. What was going on? The next thing I knew Fr. Rydzik was leaving….and we were not! He was leaving us alone with the record books to perform additional research. Jackpot! I offered a donation to the church, but he politely refused and suggested that I learn Polish instead. Understood!

It was now about 6:30PM and Zenon, Amy, and I began feverishly flipping through record books going back into the 1700’s while passing a camera around and taking pictures of anything that appeared useful. Only minutes later, a nun, followed by a puppy, walked into the office and proceeded to sit in the next room. For our purposes I will call her Sister Mary Patience Eternal which will be evident later. The purpose of the phone call now became clear. He was  willing to leave us with the records, but with a babysitter. I did not care one bit. Around 7PM, we heard the television in the next room turn on and we began to hear mass. Mass from the Vatican? A Polish station? Did not matter. I figured we had an hour to continue searching at this point.

For the next hour, we worked hard flipping through hundreds of years of records and taking more pictures than I could count. Every few minutes, we would see a woman peek her head around the corner and we would smile and keep taking pictures. Just before 8PM, the television mass was ending and I knew that our time was most likely coming to an end. At 8PM, she came around the corner and stood in the doorway. She and Zenon had a conversation and he instructed us to began to put the records away and pack up. It will take me months to get through all of these records, but I was on cloud nine. I could not believe the amount of information that we were able to find…most of which I won’t know about until I have had the chance to parse through each picture. We did leave a brief note of thanks and a donation on Fr. Rydzik’s desk.

As we were walking to the car Zenon explained to me that Sister Mary Patience Eternal had to be up early in the morning and needed to get home to finish a few things before going to bed. He also explained to me that Fr. Rydzik told her that our visit would only take about 15 minutes…rather than the hour and a half that we stayed. I am eternally grateful for her patience and help! Because of her presence and Fr. Rydzik’s willingness to allow us access to these records, I can go back generations. We decided to return the next morning to attend mass and to try to find a parishioner who was familiar with families in the parish.

Another amazing sequence of events! I could not have imagined all of this taking place while planning this trip.