After finding all of that information in the Odrzykoń parish records, I was very eager to return the next day to attend mass and explore the town. We left our hotel in Tarnów just before 9:30AM to begin the one and one half hour drive back to Odrzykón where we would attend the 11AM mass.

As we drove through village after village, one of the things that I noticed was that all of the churches had groups of people gathered outside around the exits. Asking Zenon why the people were waiting outside the church, he stated that many people prefer to worship outside the church itself rather than inside the building. Most churches have speakers above the entry doors so that the entire mass can be heard outside. As we drove through town after town, each church had gatherings of people at each door where the speakers were located. Interesting!

We arrived in Odrzykon as mass was beginning and quickly went inside. Another thing that I have noticed about many of the churches we have been visiting is that they look very large on the outside, but the actual space on the inside is minimal. Even now, looking at the pictures of St. Catherine and Our Lady of the Rosary church in Odrzykón, I cannot believe how little space we had to worship on the inside.

When we walked in, it was standing room only and we found a small spot in the back. Now I understood why so many preferred to worship outside the church. Although church attendance in the large cities in Poland is decreasing similar to the United States, mass attendance in the small villages is apparently alive and well.

Mass proceeded as usual and I was able to follow along very well. I even knew many of the responses and recognized many of the prayers from the numerous Polish masses we attended growing up. As I looked around at the number of people, I tried to imagine how long communion might take.

There must have been a few hundred people crowded inside the church and I couldn’t tell if there were also people standing outside. However, at communion time, I was very surprised. Out of the many people crowded into the church, only about 30 people got up to go to communion. I waited for the rest of the people to begin processing forward, but noticed communion was over. I obviously missed something. Later, I learned that in Poland, people still follow the practice of only going to communion when they have gone to confession. Although mass attendance is high, apparently confession attendance is quite low!

As mass ended, Amy and I took an opportunity to take some photos of the inside of the church. It really was quite beautiful. 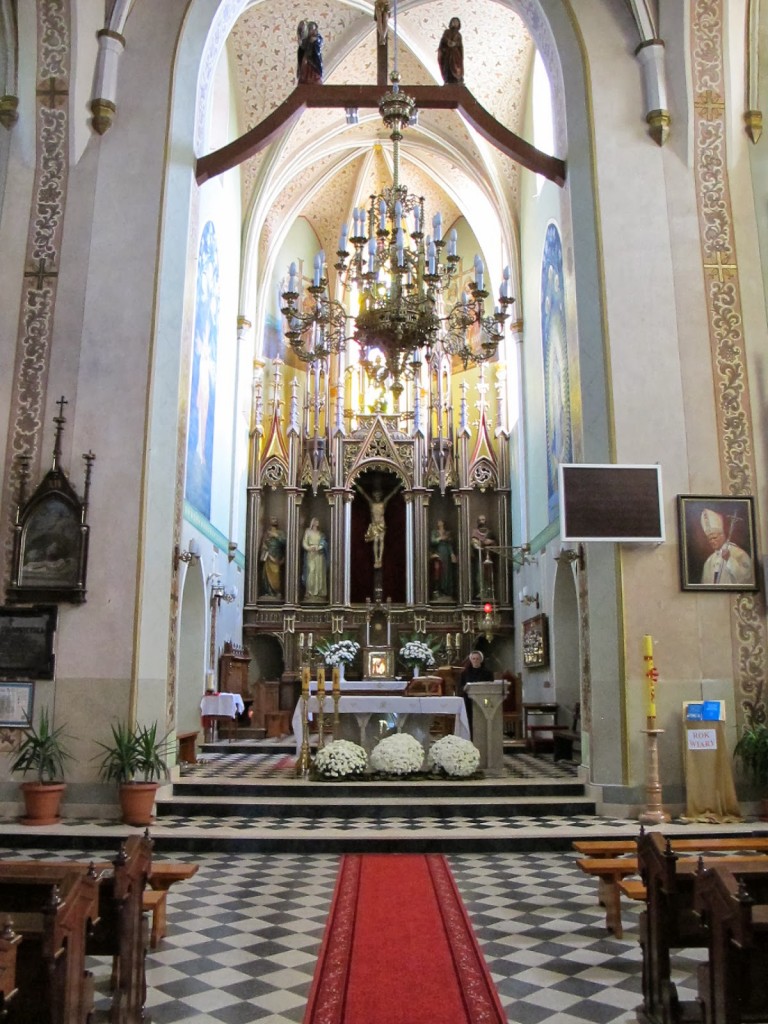 At first Zenon was also roaming the church taking pictures; however, after a few minutes, we no longer saw him. We finished our picture taking and went outside to look for him. As we exited the church we noticed that he was talking to Fr. Rydzik who was calling to a woman walking away from the church. She came back and began her conversation with Zenon. She appeared to be thinking hard and doing quite a bit of pointing. He was working his magic again. This man will talk to anyone and would fit into my family very well! He finished the conversation and called us to get into the car.

As we buckled in, he explained that the woman he was speaking to knew many of the families of the parish. Last night we had been able to trace a family descended from Maria Danek, my great-great grandfather’s (Tomasz) sister, and she knew where this family lived. Time to go knocking on doors again.

Arriving at the house, it did not look like anyone was home. Zenon knocked on the door and no answer. Knocking twice – no answer. Hearing a noise inside, he knocked a third time, and this time, a little louder. An older woman finally answered the door.

I heard quite a few “Nie, nie” (no, no)….this was not turning out promising. Zenon motioned for us to get back into the car. Did we strike out I wondered? I asked him what happened and his simple reply was “wrong house!” That made me feel a bit better. Proceeding only one house over, we went through the same routine: a few knocks and then someone answered the door.

We could hear someone unlock the door and then open it only wide enough to peek their head around. Zenon explained our story to the person answering the door. He looked to be about the same age as Amy and I, but did not appear very interested. After a brief conversation, he turned and called to someone in another room. A woman appeared at the door with an apron on. It was apparent that she was in the middle of cooking lunch (their largest meal here in Poland). She also seemed a bit skeptical to our story, but after some more conversation, invited us in.

By now, I assumed that these people were mother and son. We were invited into their living room and she and Zenon began throwing names around. I am sure that he was trying to show her the information we had found to see if they were, in fact, related. She didn’t appear to be very convinced by our story until Zenon pulled out his notebook and began sketching her own tree back to Maria Danek, her great-grandmother. At that point a big smile came across her face and her son, too, began laughing. I was pretty sure that Zenon had done his magic a second time. The woman disappeared and came back with a stack of pictures and began telling us who everyone was. 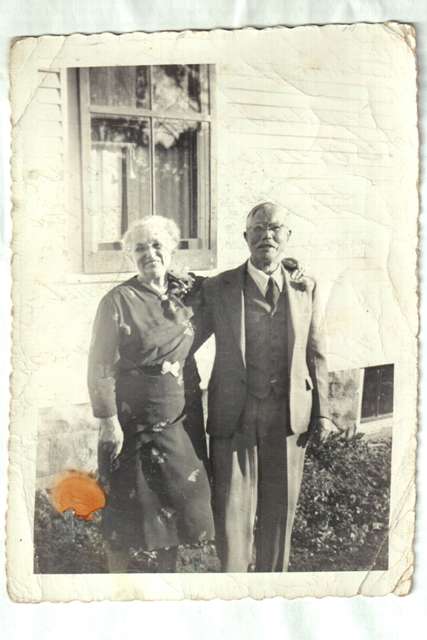 Similar to my situation, she also had a stack of pictures that looked very old, but she did not know who any of the people were. At this point, Zenon and I ran out to the car to get his portable scanner, my laptop, etc. We would be sharing quite a bit of information.

As we sat back down to begin scanning pictures and sharing information, the woman said something to us… Zenon translated that she was inviting us for lunch. Before we could say anything, her son spoke a few words and then the woman quickly left room. I was puzzled. Then, to my surprise, her son said “I answered for you!” HOLD ON! I was astonished that he spoke English. It just occurred to me that he had been going back and forth in Polish during the conversation, but Zenon needed to translate everything for us. He had been holding out on us until this moment.

From this point forward the conversations flowed freely. As we sat at the table, the woman placed bowls of soup in front of us. It looked delicious. Perhaps it was some sort of chicken soup. Lots of noodles and a whole carrot laying across the bowl. It was delicious!
I later learned that the broth and noodles were all homemade. The carrots were probably from their own garden. We all finished our soup and then, more food. She brought out potatoes, chicken cutlets, something that looked and tasted a bit like coleslaw, drinks, desserts, etc. Very randomly and very quickly, she had prepared a feast for us. The hospitality in this country is amazing!
Part way through the meal, the door opened and a man walked in. It was the woman’s husband returning from the local soccer match that was taking place that morning. I can only imagine his initial reaction when he returns home from the soccer game to find his wife feeding a handful of random people in their living room! 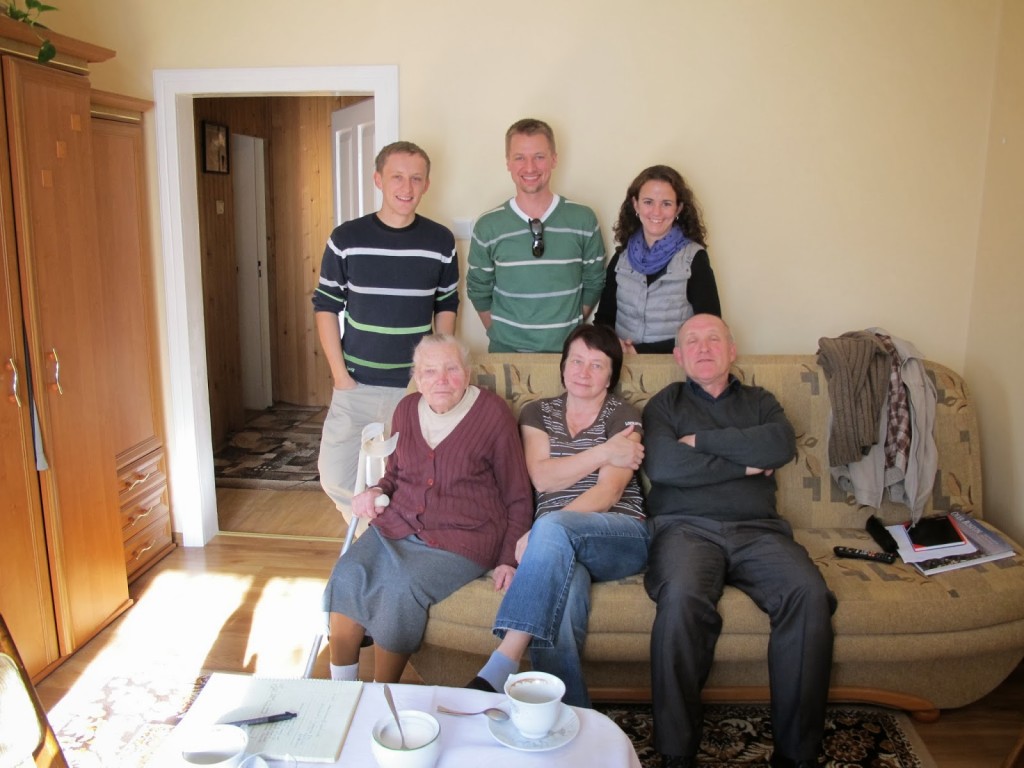 We continued our conversations over a full plate of dessert and coffee. She told us a bit about her family and I shared a few stories about mine. We asked about the local cemetery and she stated that many of the graves were unknown. All she could show us would be her father’s grave. Even her father would feel very lonely as other families visited their ancestors graves on All Souls Day since he did not know where his own parents were buried. I thought it would be nice to at least go see and visit the cemetery in general. Chances are that many family members are buried there, but likely in unmarked and reused graves. 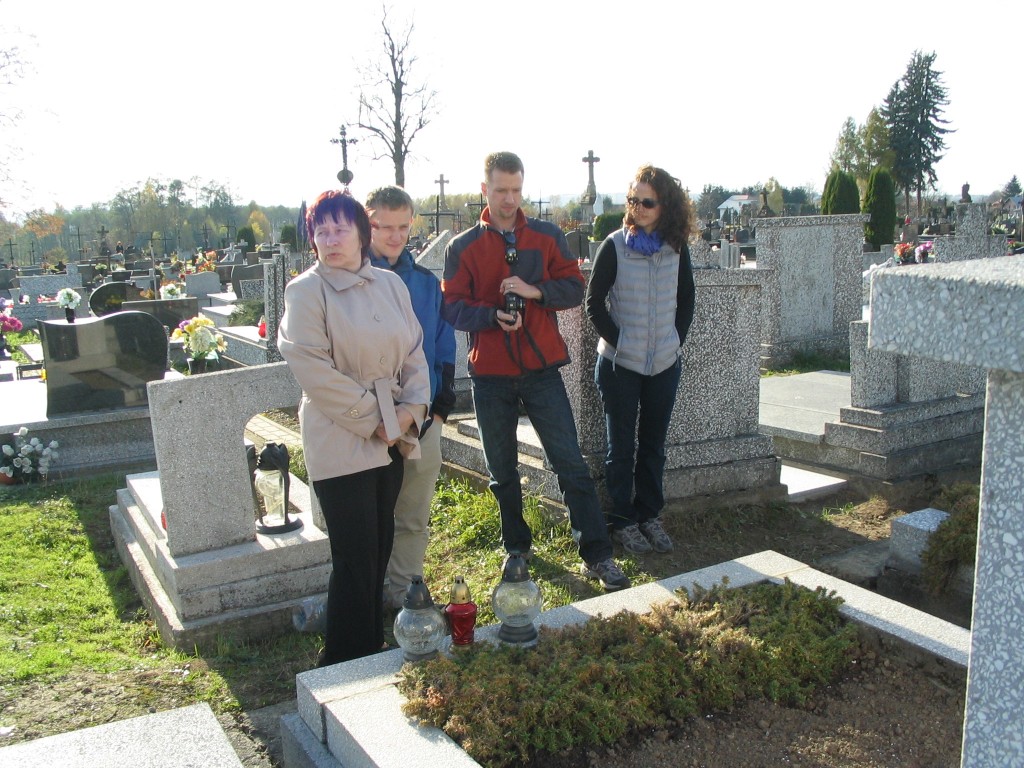 That night driving home, I could not believe what we had done that day. I am so glad that we decided to take this trip and could not be happier with the results due to Zenon’s hard work and perseverance.