I live in Sydney, Australia. My parents were both born in Poland as was my sister, Grazyna (Grace). My parents emigrated to Australia in 1958, aboard the ship ‘Roma’, meeting up with my father’s older brother, Jan Pola who had arrived here in 1955 (his is another story). I was born eight years later in Sydney, the first-born in my Polish family outside of Poland.

I have always had an interest in family history, having researched my husband’s family in Australia, England and Ireland for the past fourteen years. When my mother was still alive, I asked her about her and my father’s family and she helped me to draw a tree of the families with what information she knew. This started me on the path to finding out more about my family in Poland, but at this stage I could only rely on information from family, which included sending the trees to the family in Poland and asking them to fill in what they could, which they promptly did!

My mother had taken me to Poland in 1974 when I was 8 years old. This was the first time I would meet the family members and I had a great time meeting and playing with lots of cousins my own age. When I returned I kept up the contact by writing frequent letters to some of these family members, including my only living grandparent, my grandmother (Babcia) from Brzeski. These letters would prove to be a catalyst in later years, when trying to source information to build my family tree in Poland.

In 1995 I was travelling through Europe and met up with my sister and niece in London so that we could fly to Poland for two weeks to visit the family. In 2008, I went back to Poland with my husband and daughter for a week so they could meet my family and see how my relatives lived. A few weeks after this trip, my father died aged 85 years. He was my last link to the family in Poland and this left me feeling quite empty. This prompted me to find out more about his family and to dig out old family photos and the old family trees I had started many years ago…

I spent the next year focusing on the photos and trying to piece together who they were and writing it all down as well as going through other old documents and photos that were left after my parents died. I also found a researcher based in Poland on the internet who could research the births, deaths and marriages of my family. I contacted him and arranged to have two main sides of the family researched which he provided to me via email some two months later. There it all was, in black and white. Family members back to the 18th century. I was ecstatic! For the first time, I had names and places. 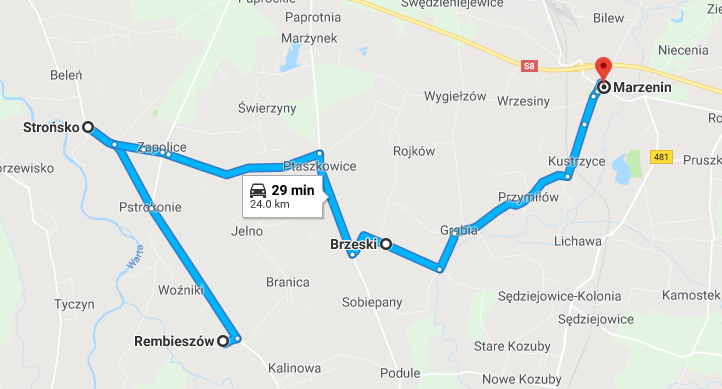 A few months later, whilst looking on the internet trying to find any online Polish genealogical information I found Zenon’s website, offering trips within Poland to find ancestors and information. This sounded extremely interesting and it was at this time that I decided I wanted to go to Poland to do some family research. My sister Grace was also showing family interest and decided to come along with me. I excitedly contacted Zenon and promptly booked him for four days.

My background is quite different to what Zenon is used to in his line of work. For a start I can speak, read and write Polish and I also knew some of my family as I was still corresponding with them via letters and now email. My main aim was to find more information about family members including verifying some births, deaths and marriages from Parish registers as well as learning about the land my families seemed to have lived on for generations.