We drove south from Bydgoszcz to reach the Iron Age site of Biskupin. On a very foggy Sunday morning we walked through the replicated wooden village of an ancient settlement; the oldest archaeological excavation in Poland. Wood structures were exhibited showing many primitive styles of lean-to shelters, log homes and multi-family long houses that were constructed using ancient tools. Ancient man appeared to have rather sophisticated skills. Movies have been filmed at this site.

Further south we visited the former, noble-owned village of Gultowy near Poznan. The church was shrouded in mist this afternoon, located on a small rise in the center of the village. It was bordered on two sides by an iron-picket fence that separated it from a park with a lake. Being inside the building was a moving experience. It was the parish where my maternal grandfather was baptized only months before he was carried by family on a ship to America. The old baptismal font was located and photographed.  The church was constructed of wood; with interior whitewashed walls, plank floors and ceiling. Softly painted religious paintings with border painted, rococo styled,  gilded “frames” decorated the paintings and Latin script drawn on surfaces. White porcelain statuettes adorned shelves and side altars. A raised stone grave stood along one wall, holding the remains of one of the noble Bninski family’s deceased  (More graves had been found under the floor of the church during renovation).

I considered going to confession here, since a priest had arrived for the Sunday evening mass. Suddenly, I realized that I only spoke English and the priest spoke only Polish… I would need the words translated.  Zenon smiled and slyly said: “That could be arranged”. It took only a few seconds for me to realize his joke. I told Zenon that he was NOT going to hear and translate my confession! Instead, I opted for a blessing from the priest (That grace is likely the only reason we were able to safely maneuver on the extremely foggy roads later that night to reach Poznan without an accident). 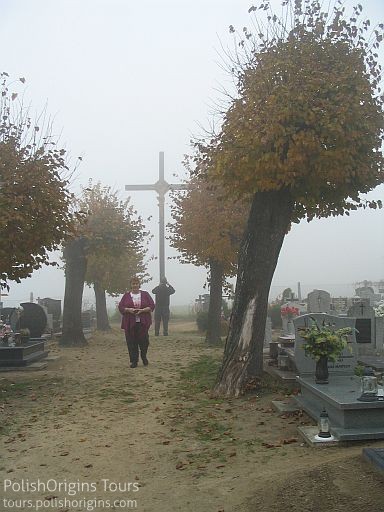 We drove first to the cemetery and found only two old graves bearing the family surname. Zenon spoke with visitors there and learned that an elderly widow with the same last name lived in the village. I was reluctant to show up on her doorstep in the dark, unannounced (Imagine if that happened here in America). Zenon encouraged us, saying we had come this far, and should not miss an opportunity to discover any related family. I arrived in Poland knowing who my direct ancestors were going back in time to the late 1600s. Other families from the Gultowy parish also migrated to America. They established parishes in Michigan that showed matching surnames with those in the parish roster of Gultowy. I expected that any links between my direct ancestors and remaining families in Poland were broken over one hundred and thirty years ago.

Soon Zenon and I stood outside a fenced-in yard in the near dark. We had no address, only directions that told us to count a number of houses from a corner. A huge dog barked inside the yard and ran toward us at the gate; alerting the family that we were present. Soon a man appeared from the house and walked to meet us at the sidewalk. Zenon explained why we were there. He returned to the house, while we stood quietly and waited. Again, the man came outdoors and this time locked up the wolf dog. A number of adults greeted us at the kitchen door and urged us to come in and sit down. The daughter of the elderly widow who resided there would not even let me remove my shoes at the door. She hurried us in to sit at the kitchen table. We told the story of earlier family migration from the village in 1881. Irena, the daughter of the elderly widow had no direct knowledge of our inquiries but said her aunt might help.  The family was gracious and we exchanged email addresses and took photos together. Three generation of family resided in the present family home. Irena has since communicated through Zenon to outline her known ancestral tree and gave him descendant names. She emailed me photographs of her oldest family relatives. 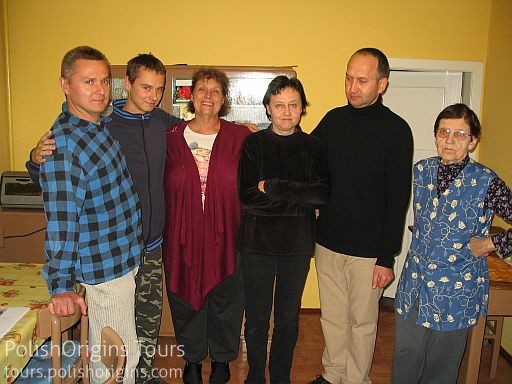 I communicated with her again by email upon arriving home. I suspect our great grandfathers were brothers. I hope to have ongoing communication with Irena and her family. A new beginning.