I cannot recommend Polish Origins highly enough. In June 2018, I spent a week touring Mazovia, the place from which four of my great-grandparents and three of my grand aunts emigrated to New York around the turn of last century. The week was exceptionally well planned by Aga, and Daniel was our guide and translator. Daniel is incredibly adept at quickly establishing rapport with people and assessing options for which leads to follow, and this led to learning so much more than I’d have imagined possible and experiencing very many unlikely moments, including some adventures.

According to US census and naturalization documents, the village of Brzózki was where my Serafiński grand aunts and their parents were living when they left Poland, but despite prior attempts with multiple researchers, I could not locate any documentation of them in Polish archives. So I was fairly sure—but not one hundred percent certain—that this was the correct village, and I was hoping to find some verification. 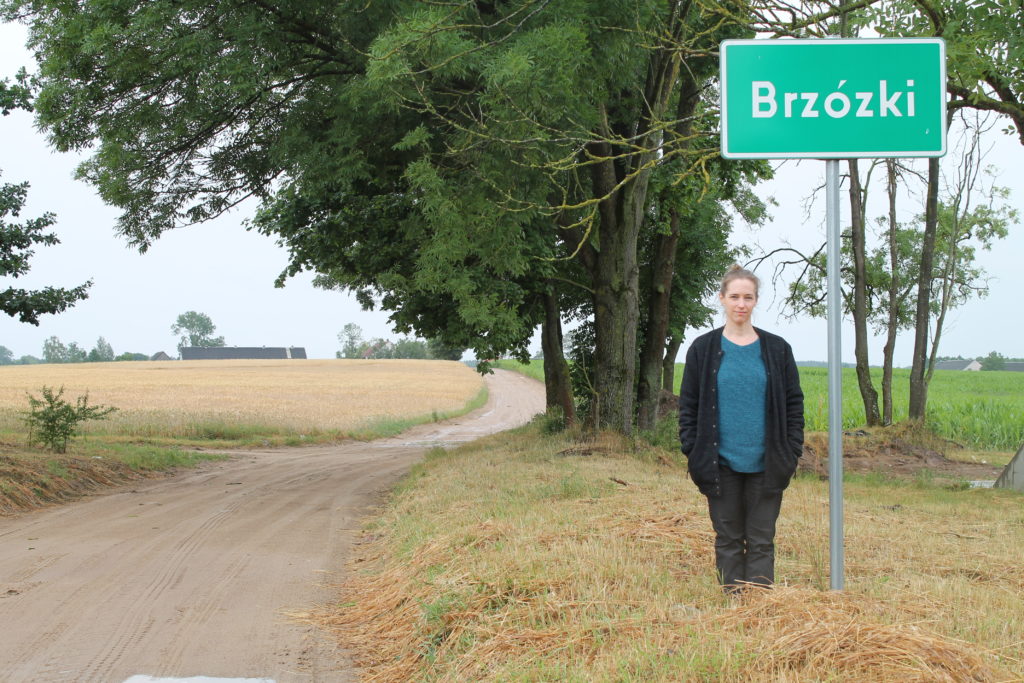 In addition, previous research had turned up records that were not conclusive, but suggested that my great-grandfather Serafiński had been born in nearby in Borkowo parish. Ultimately, I wanted to literally set foot on the land that they came from, in order to have a sense for what their lives may have been like, and to pay my respects to the places that led to my existence.

By unbelievable coincidence, just the week before I arrived, another American had been on a tour with Daniel to Brzózki. Even in a large city, this synchronicity would have been somewhat unusual, but Brzózki is a tiny tiny village on (and even off) a dirt road, with very few houses—a dozen or so at most it seemed, open fields and a small birch forest. Really most unusual. I was honestly flummoxed by this coincidence. 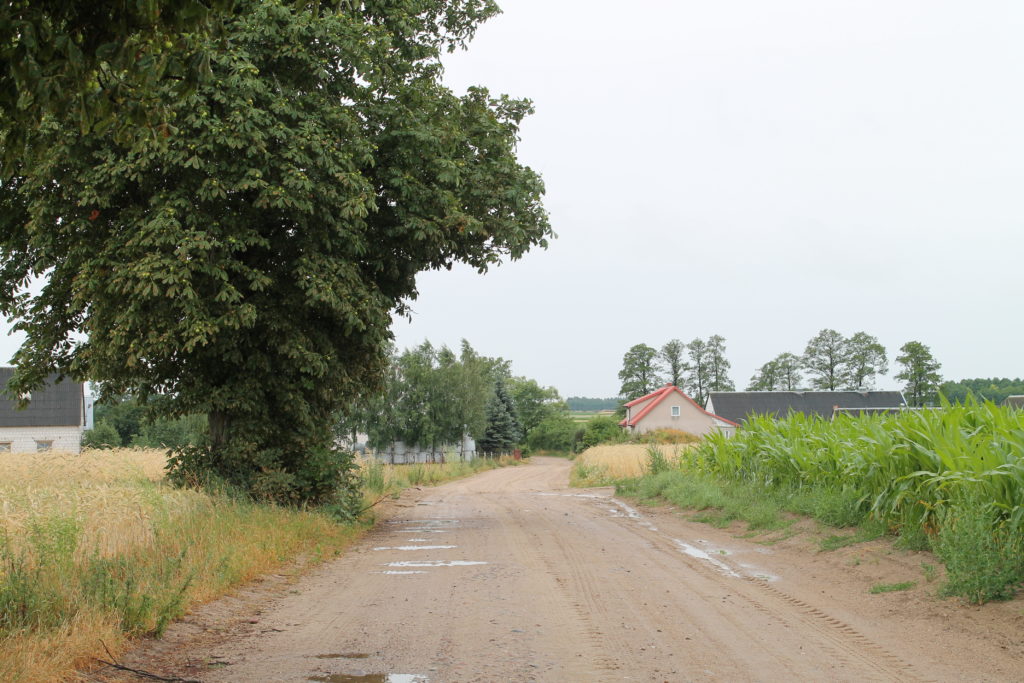 When we arrived in Brzózki, we parked at one end of the village and proceeded to walk through the village on the dirt road. Four cows came running to me from across a field and looked at me. It felt like a welcoming committee, especially considering that one cow had a white patch on its black nose in the shape of a heart, something I actually didn’t notice until some months later when reviewing my photographs.

Daniel led us up to a large farm house on a small hill and an older woman came out of the barn to talk. She advised us to visit a man in the last remaining wooden house in a neighboring village who shared the surname of my great-grandmother’s family.

We drove to the this village, with a small cluster of very friendly dogs trying to tag along by running after the car as we left Brzózki, and easily found the wooden house in the nearby village.

The couple who lived there with their daughter were extremely hospitable, and insisted on serving a generous impromptu lunch that included homemade sausage that was excellent. I haven’t eaten meat in years but still very much enjoyed the food and was not at all upset by it.

This man had the most extraordinary stories to tell, and what’s more, in his gestures and manner of speaking, he could have been a twin of one of my brothers. I should stress that this brother has an entirely unique personality, not just within my family, but indeed in the world. The striking similarities between the two was uncanny and curious.

This man led us to another nearby village to meet with more family who had even more stories to tell, and again invited us in, this time for tea and cookies. We visited for some time and could not establish for certain a direct relationship since it was so long ago that my great grandparents would have been living in the area, but the surname is uncommon enough that it’s highly likely we would be distantly related. Nonetheless, their hospitality was so welcoming and appreciated.

From here, we returned briefly to the area of Brzózki by the river Wincenta because I had brought a wianki (wreath) from the Wianki Festival in Warsaw that had taken place a couple days before, and I’d wanted to release into the local waters, which I did. 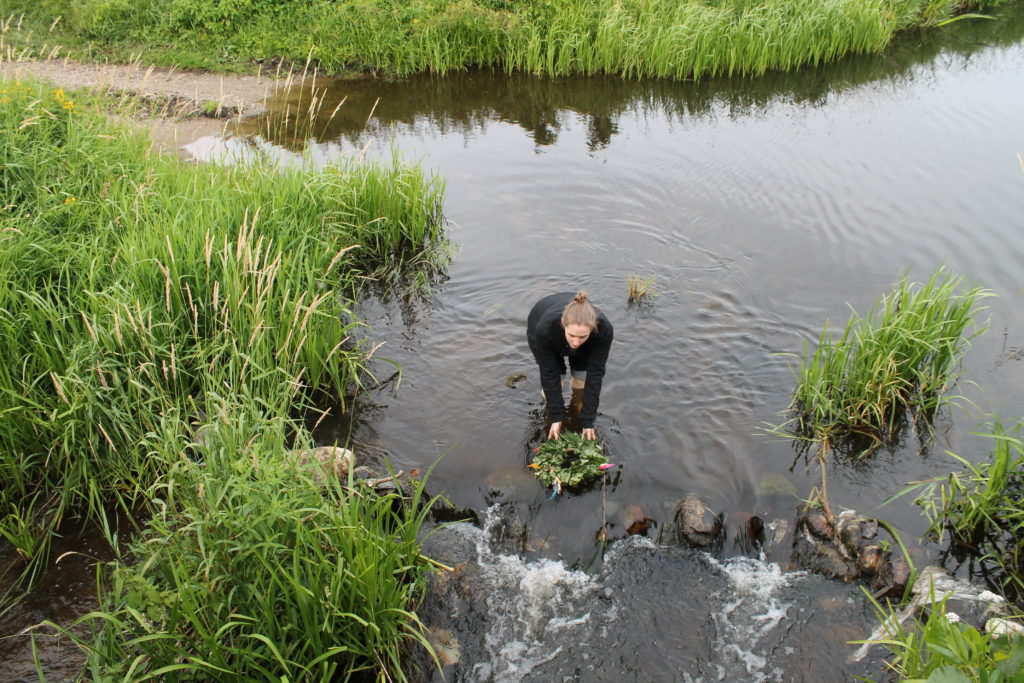 I also had been certain I wanted to visit the birch forest, seeing as the town is named after it, and because I was convinced that my grand aunts and great grandparents must have visited it as well. In addition I study herbalism, so I was interested in the flora there.

The problem was that in order to get to the forest, it was necessary to drive up a small hill on a very sandy tractor path through a farmer’s field. I could not be deterred from my mission however, and Daniel’s car and driving handled it all very well. Along the way to the forest, we came to a crossroads that had an old wayside cross, and we stopped to look and take pictures of it before having a short walk in the forest and tasting some wild berries.

Daniel later mentioned that there was some information in that wayside cross that answered a question which had remained outstanding from the previous week’s tour to Brzózki—hard to believe, but true!

As if that wasn’t enough, we later discovered—through the generous storytelling of a distant cousin that Daniel found on the fly by asking around the village—the unmarked resting place of my great grandfather Serafiński’s father in the village of Borkowo, as initially believed likely.

Then there were the villages of the Piotrowski side of the family to visit that included a special guest tour guide in the form of excellent local historian Mr. Paweł Gąsiorowski, and a fabulous home-cooked dinner with the (now fairly distant) Piotrowski relatives who still live on the family farm that my great grandfather would have been born on. And, much family history and shared photographs here.

We also enjoyed interesting and useful time in parish offices with local priests and at regional archives, and many cemeteries. Across the board, there was so much learned, and so much hospitality extended, it was really amazing and moving.

There was also a little bit of time for genealogical tourism, with visits to local sites of historic interest that was not directly related to my family but gave the flavor of the area.

Much of the week consisted of a surprising number of little miracles and fortuitous coincidences, and they would take quite some more time to tell, but rest assured, it was an entirely memorable and magical experience!