Last night, before we were dropped off at our first Lithuanian hotel by our guide, we had to drive from the border to Alytus. Although he was quirky, our guide was pleasant. I was most excited when, within minutes of getting in the car, he handed me a plastic bag containing two books. These two books were written by a historian who lived in Vabaliai (the village where my Maslauskas ancestors had lived).  Two, 600 page books, specifically written about the Nemunaitis Parish. The only downside – I now had 1,200 pages of information written in Lithuanian. Well, you can’t expect everything, right?

Upon check-in, I had briefly flipped through the books. Included in these books were censuses from 1885 and 1913. Just before Christmas each year, the parish priest would visit the families of the parish to count how many people would be in attendance at Christmas masses. Looking through the multiple villages, I found my direct ancestors as well as many brothers, sisters, cousins, etc. I was thoroughly amazed. This book contained history of the parish, families, priests, and all local villages going back to the 1700’s! It was only published in 2002, but I couldn’t help but think what my great aunt would have given to see the information in these books!

In the morning, Amy and I were able to sleep in a bit. We would not have to meet our guide until 10:30 or 11AM. We were having breakfast and enjoying our coffee at the hotel when he walked in slightly after 10AM. We gathered our things and set out to Vabaliai where I had found ancestors and where our guide had arranged for a meeting with them. I was so excited to be traveling to my ancestors’ village, but on the way, I noticed a few things about Lithuania that were strikingly different than Poland. The first being that it is much less developed. Roads were not as “up-to-date” as the roads in Poland. Some of the roads that we were traveling on were simple one lane, dirt roads. Even in the smallest villages in Poland, most of the roads were paved and in much better shape. Second, I could not believe how unpopulated most of the country was. Very few times in Poland were we traveling long distances with out seeing or passing through towns and villages. Here, in Lithuania, we were seeing quite a bit of nothing on the side of the road. 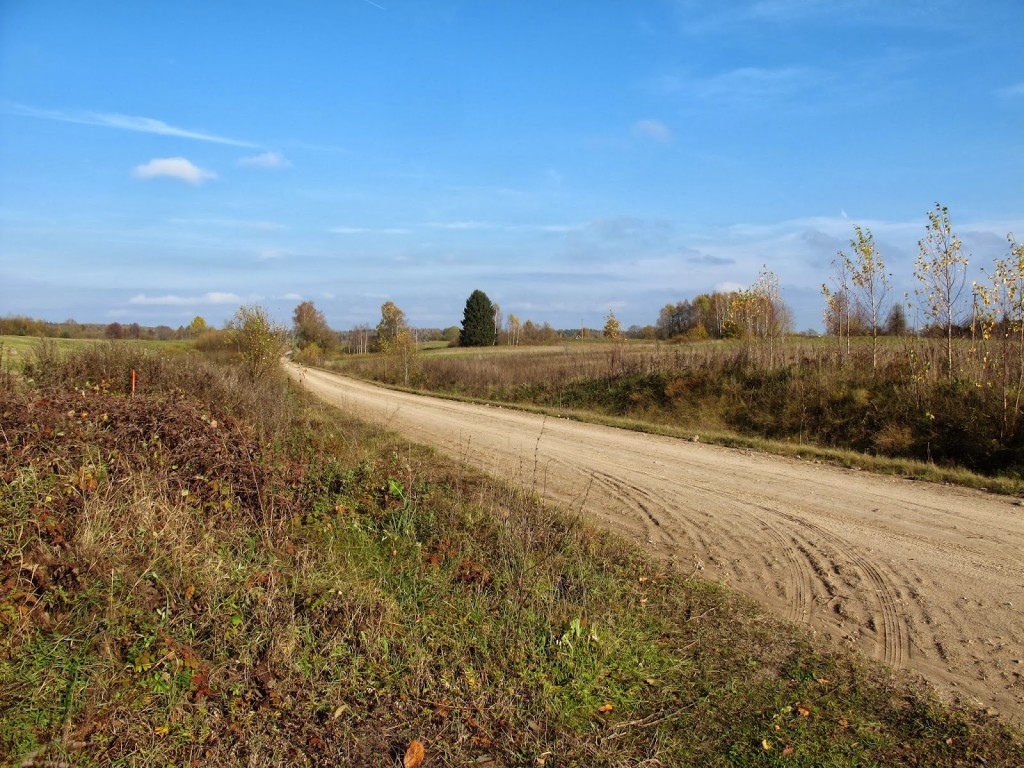 Arriving in Vabaliai and the surrounding villages, we went to a distant cousin’s house, Albertas. He and his mother Marita were waiting for us. They were visibly excited to see us and I was just as excited to be there. As we entered their home, the hospitality continued. Set out in front of us was a spread of cookies, homemade jam, chocolates, slices of meats, and other desserts and snacks. We ate a few things and drank coffee (the popularity of instant coffee in these countries is amazing. Perhaps I will send Keurigs as Christmas gifts) while we talked about relatives. After showing them the tree I had created, we were able to quickly connect ourselves to each other. I laughed when his mother wanted to verify a few details and pulled the Nemunaitis Parish books from her bookshelf. Apparently people in this town had read these books as well. We began to show pictures of our family and they began to show us pictures of theirs. How amazing to be sharing food, drink, and stories with the Maslauskas family. As in Kopczany, Albertas had a few things planned for us so outside we went to take pictures and travel along.

First we went to another relatives house, Arvydas. Although his last name was not Maslauskas, he was also related through his Maslauskas grandmother. Again we began talking about family and relatives and again, he went inside and brought out the Nemunaitis books to verify information. Perhaps it wasn’t on the New York Times Bestseller list, but these books were widely read in this area. Over the next few hours, we would be taken throughout the Vabaliai area and shown important places relating to the Maslauskas family. There is one house that still remains where some of the Maslauskas family lived, but most were destroyed during Russian rule when farms were consolidated and people were relocated. We saw the place where one Maslauskas was killed during WWII in addition to places where family farms were. We visited the Vabaliai cemetery and also drove around the lake for which Vabaliai was named. Since the village once contained well more than 40 or 50 houses and now contained only 3, we visited a lot of places were things “used to be.” Now, most of the area is either wooded or just simply open fields. One thing that I learned form our tour was that almost all, if not all, Maslauskas families from this area are related. I had gone from 30 years in the United States where I only knew of my immediate Maslauskas family to a place where Maslauskas was the common name and almost everyone had one somewhere in their ancestry. 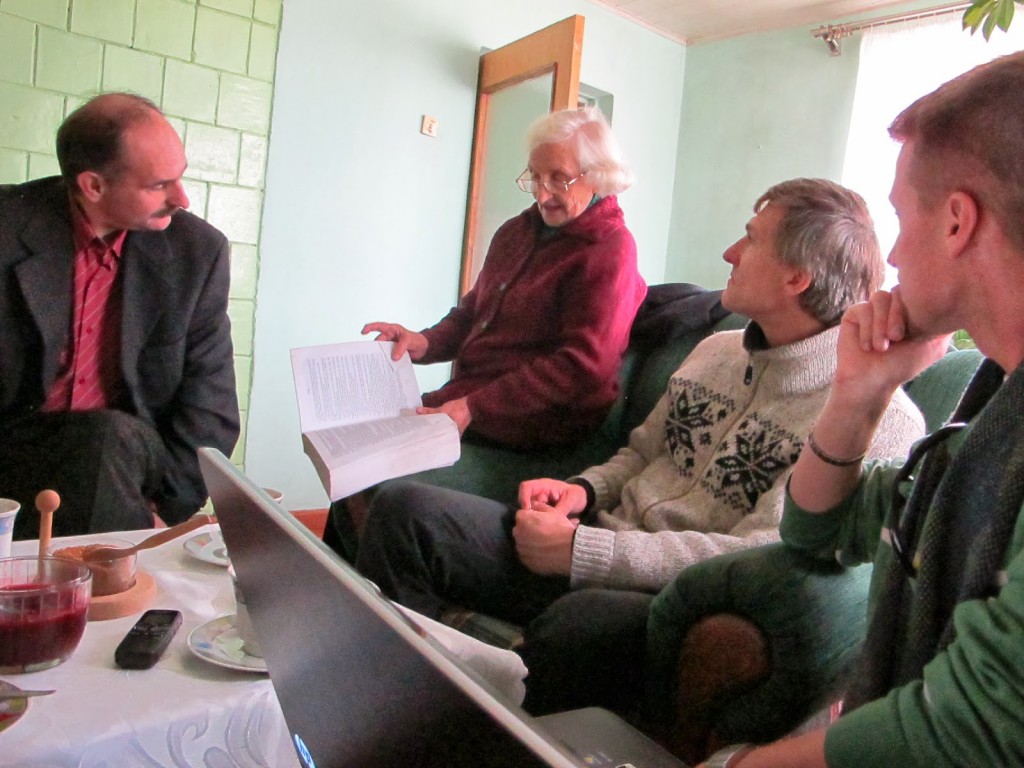 After our tour of Vabaliai, we dropped off Arvydas and proceeded to Nemunaitis – this is where the church my ancestors attended is actually located. In Nemunaitis, we first visited the cemetery behind the church. Albertas’ mother, Marita, was able to show us 6 or 8 Maslauskas graves that they knew about. None of the names sounded familiar so I’m sure that any direct ancestors who died in Vabaliai or Nemunaitis are buried in unmarked graves. These people were definitely related, but before my trip, I wouldn’t have had enough information to be able to connect them to my family. I guess that only a genealogist gets excited about visiting cemeteries – or traveling halfway across the globe to visit a cemetery. I know, I’m a good time!

Walking from the cemetery to the church gave us a great opportunity to take pictures and chat a bit. Marita told us about growing up in the area and talked about some of the changes that had taken place over the years. As we were taking pictures she disappeared to a nearby house. I assumed she was going to the rectory see if the priest would open the church for us. Sure enough, she returned within a few minutes with a man in knee-high rain boots, dirty pants, and a bulky sweater. Apparently this priest is a little more willing to “do the dirty work” and get things done around the place. It was very refreshing to see this sort of an attitude. He very graciously opened the church for us and allowed us to go inside. He patiently waited as we meandered through the aisles taking pictures and paused to take it all in. As well left, giving a donation for his time, he thanked us for the contribution. Outside, in the sun once again, we roamed the grounds exploring other buildings and stopped to hear the story behind a nearby statute and how it was buried for years to hide it from the Russians. Soon it was time to get back in the car, but we had no idea what Albertas had planned next. Our time in Lithuania was just going with the flow and following people. 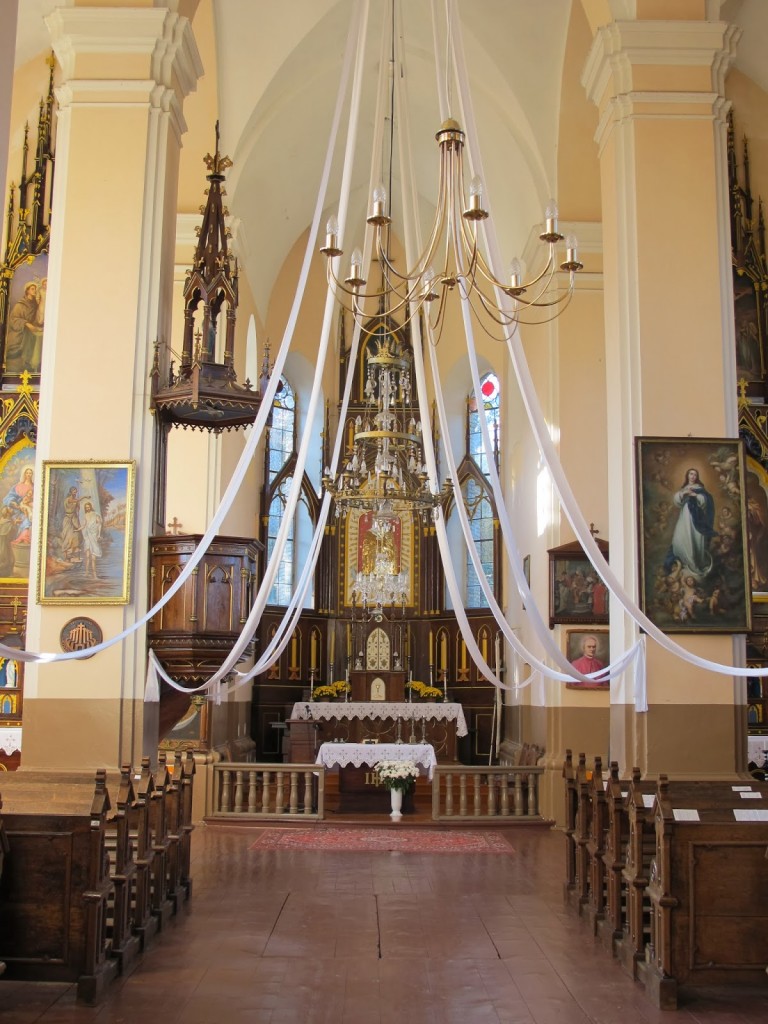 I could tell we were heading back towards the village of Vabaliai, but we pulled into the parking lot of what looked like a convenience store. Everyone got out of the car and went inside. Perhaps if we spoke any Lithuanian we would have some idea of what was going on? As we entered the building, we realized that this was the store that Arvydas had told us about. His father built this store by milling his own local wood. (There is a story about why he built the store on this specific plot of land, but I can’t put it in writing here). Currently, I believe that Arvydas owns and runs the store. This is why he had to leave us earlier, but was now behind the counter working. We all sat down at small tables and Arvydas served us coffee, tea, and cookies to snack on. Out of the corner of my eye, I also saw him pour small shots of something else. He dispensed the shot glasses of brown stuff (probably some sort of brandy, but I don’t know – it was good). We sipped the brandy drink and continued chatting while Arvydas, who is quite the story teller, entertained us. He was very dynamic and even though I wasn’t sure what he was saying until I got the translation from our guide, watching him was thoroughly entertaining. At one point, he disappeared again and then reappeared with what looked like an old 1-liter soda bottle. It didn’t appear to have anything that looked like soda in it, but contained a clear liquid filled all the way to the top. Laughing, he said something to our guide and then looked at me and said “Moonshine!” I laughed as our guide told us that Arvydas knows only one word in English: Moonshine. Years ago, a man from the United States had stayed in the area and introduced him to the drink. He has been making it ever since. Another glass came out and we tried his brew. It was very good: very sweet and no after taste. Knowing that we hadn’t eaten all day and just downed a shot glass worth of something else, I wasn’t looking to continue drinking any more of this though.

As it got later in the afternoon, Arvydas and Marita had to leave and we needed to make our way towards Marijampol as well. We politely thanked everyone for their hospitality, said our goodbyes, and drove off towards our hotel in Marijampol. 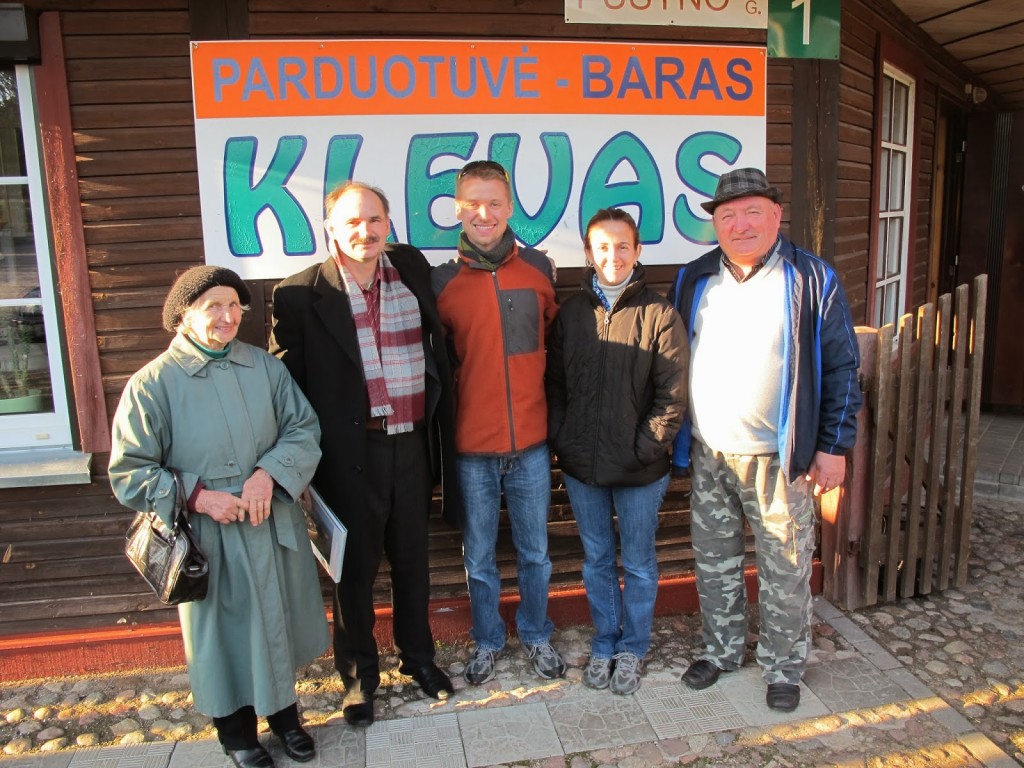 Our evening was uneventful: Checked in to the hotel, grabbed some dinner, and then settled in for another busy day the next morning.