On Thursday, we had only two items on our to-do list. First we would go to Kalvarija where I suspect one part of Amy’s family is from. We would visit the local church and ask around for any leads about the family name: Jeseliunas. Second, we would go into the “Old Town” of Kaunas and meet a friend of mine for lunch. At the end of the day, we would make our way to our final hotel in Vilnius. 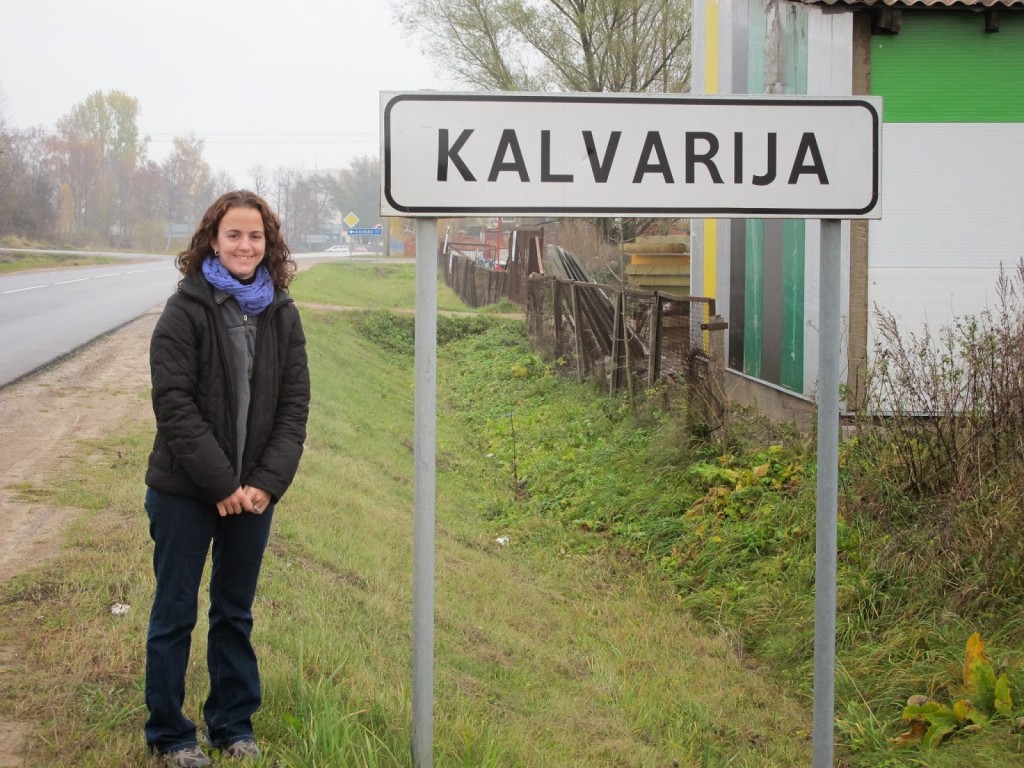 As we made our way to Kalvarija, our Lithuanian guide was definitely starting to get on both of our nerves. He would constantly brag about how great Lithuania is and how great Lithuanian people are. This was amusing at first, but by the end of the day, the humor had worn off and it became annoying. Also, he spoke English well, but had a very difficult time comprehending it. If we asked a question, we usually got an answer to a different question or he completely changed the subject. If we had to spend more time with him, this would not have worked out. He, and the company that organized the Lithuanian portion of our trip, would not be things that I would recommend again. (It was not organized by PolishOrigins)

Anyhow, we arrived in Kalvarija and proceeded to the church: Then Church of the Blessed Virgin Mary. Although we know very little about this part of Amy’s family, I was able to find a reference to Kalvarija in an obituary for a relative. I was glad that we could at least visit something relating to Amy’s side of the family. If her family did attend this church, it would have looked very similar to the way it looked now. The last time the church was significantly renovated was back around the 1840’s. This was well before Amy’s ancestors had left Lithuania for the United States. The church was very plain compared to some of the churches and cathedrals that we had seen, but each church has its own charm. Our guide explained that this part of Lithuania was populated by many farmers because of the flat land and fertile soil and that this could be a reason for the simple church perhaps. After visiting the church, we made an attempt to talk to multiple Jeseliunas families in the area. They gave us plenty of information, but because of the lack of information I’ve been able to find on this side of her family, we were unable to make a connection. We ended up taking copious notes to compare to the clues that I will no doubt find in the future. People were very friendly and were eager to discuss their own family lineages with us.

From Kalvarija we made our way to Kaunas to have lunch with my friend Elena. Elena is an amazing woman who belongs to the same Lithuanian genealogy forum that I belong to. Over the past few years her suggestions, research, and Russian and Lithuanian translations have been invaluable to me and my research in finding my own roots. Without her help, much of the Lithuanian portion of this trip may not have been possible.  If we were going to be this close to her home, I needed to meet her and treat her to lunch. Of course, I probably owe her the equivalent of 10 lunches, but I have to start somewhere.

We met Elena in the square and proceeded to a restaurant that serves authentic Lithuanian food: Berneliu Użeiga. Elena keeps quite busy doing service work, taking care of her grandson while her daughter-in-law undergoes chemo treatments, helping all of us in our genealogy searches, and many other things (sometimes many at the same time). We had wonderful conversations while trying different types of food: including cepelinai again….YUM! One of the items I tried was a “coffee” that translates to “Acorn Drink.” Although I can’t say that I drank the whole glass, it was tasty. The best way that I can describe it is by stating that it tastes like acorns smell. Perhaps if you think of drinking Hazelnut coffee, but imagine what an acorn would taste like. (Our guide told us that his father had a slightly different recipe and that it came out better his way – UGH!). Of course we also ordered a round of locally brewed Lithuanian beer. Although Amy never drinks beer and claims to not like it, she has had beer more times than I can count in the last few days. 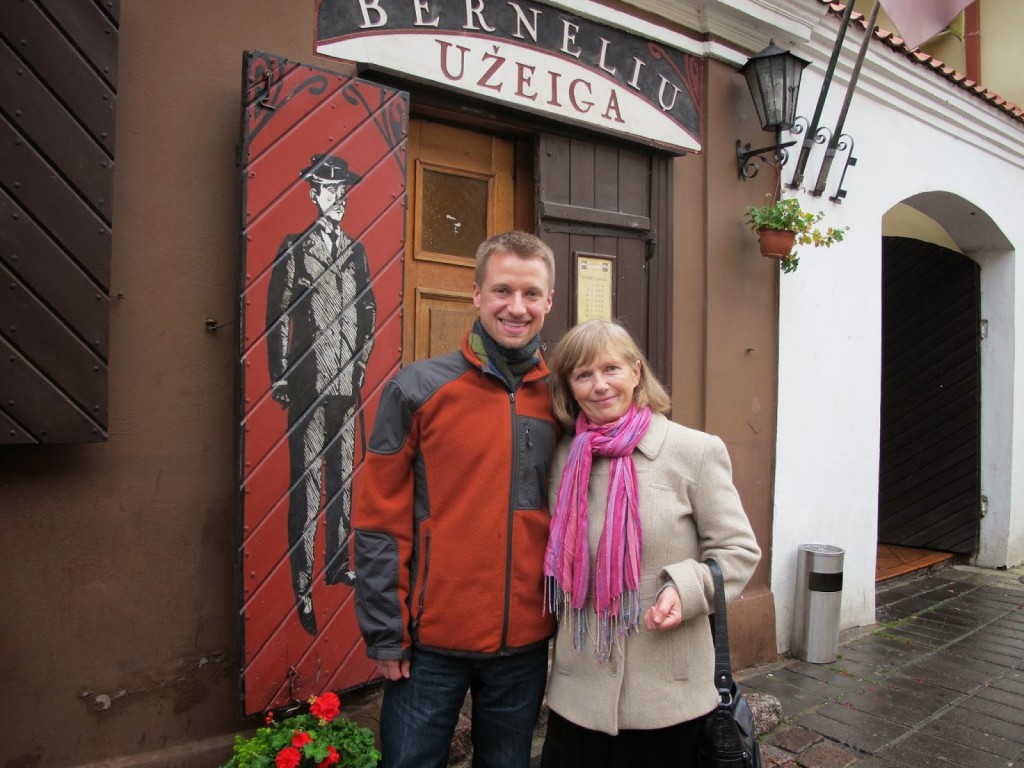 After lunch, our guide (who also appeared to be annoying Elena by this point as well) and Elena gave us a tour of the city. We strolled down the cobblestone streets gazing at old buildings, castles, and cathedrals. We also made our way down to the Nemunas river and viewed the longest bridge in the world. Of course the reason it is the longest bridge is because at one point, either side of the river used a different calendar system and were approximately 12 days different. Therefore, it was said that once you begin crossing the bridge, you arrive at the other side 12 days later. I suppose if you were traveling in the opposite direction it could also be considered the shortest bridge in the world as well. Elena also came shopping with us and guided us to the appropriately priced gift shops in the city. Even now, when she was “off the clock,” she was still helping and providing guidance. Amy thought she was just wonderful and enjoyed spending time with her in the stores and chatting. Overall, it was a simple and relaxing afternoon. 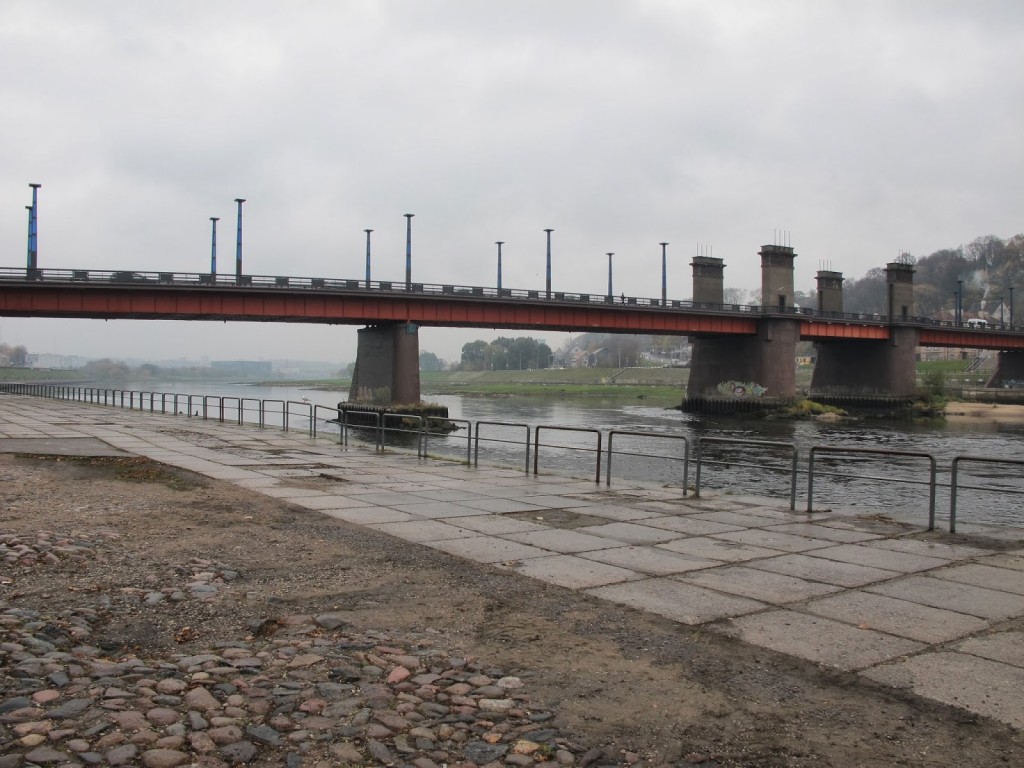 From Kaunas we drove along to Vilnius and checked into our final hotel, Grybo Namai (Grybas House). This hotel has only a few rooms and is tucked in a small courtyard in the center of Old Town Vilnius. An amazing location and an all around great place to stay! The evening was uneventful as usual. Amy and I relaxed in the room, went out for dinner and drinks, and strolled through some of the local stores. Tomorrow would be our last day before our very early flight home on Saturday morning.