As I have every day so far, I woke up early.  It’s been difficult adjusting to the 9 hour time difference but there’s enough excitement and activity each day so I don’t feel tired.  I decided to take a walk before breakfast and explore Tarnów some more.  I found a great farmer’s market just a few blocks from the hotel and stopped there to photograph some of the stalls.  I used my 3 words of Polish (and a lot of pointing) to buy some apples to enjoy back in the room.

Like with every hotel on the trip, breakfast was included in the cost of the rooms.  I was surprised this morning to see żurek on the menu – yes, the breakfast menu.  Zenon explained that żurek is a traditional breakfast food in this area of Poland, so I figured why not do as the locals do! The żurek was delicious, not as heavy as I’ve had before but still very flavorful.  It came with a cold plate full of meats, cheeses, vegetables and bread.  I normally don’t eat this much for breakfast but since our days and mealtimes are unpredictable on this trip I indulged.  Oh – and very good kava czarny (black coffee) too.

Our appointment with Adela is not until late afternoon, so the 4 us us explored Tarnów in the morning and did some shopping.  Prices are very cheap for Polish made goods.  Before the trip I knew I wanted to buy as much Żubrówka vodka as I could, so I bought my first bottle in Tarnów.  Żubrówka is flavored with a special type of grass (Bison grass – because the bison like to eat it) found in Poland, and it is illegal in the U.S. because the grass contains trace amounts of blood thinners.  Shhh, don’t tell anyone but I am going to bring back as many bottles as I can fit in my suitcase!  It was only $7 USD for a 500ml bottle – another bargain.  Mom decided she wanted to bring flowers for Adela when we visited, so we headed back to the farmer’s market and found many flower vendors.  Most looked like arrangements for funerals, but we finally found a nice bouquet of roses.  Again our limited (or non-existent) Polish was put to the test, but we successfully made the transaction.

Zenon drove us back to Ryglice and we met Jadwiga outside of her home.  She led the way down a path to an older house on the property and as we entered the home we were greeted by Adela’s bright blue eyes and happy smile.  It was immediately apparent that she was very pleased to see us and we sat in the adjoining room around a small table. Zenon explained the family relationships and Adela confirmed that she remembered Zuzanna’s visit to Ryglice in 1934.  Adela and Jadwiga showed us a box of old photos and we were amazed to see the exact same wedding photo from the 1930’s that we had brought to share!

There was much talk about various family members, questions about the family in America, and a lot of smiles.  Zenon then asked Adela about her memories during the war.  She shared an incredible story of her family home being occupied by the Germans, with 11 enemy soldiers living in their house at one point.  She also told the story of her future husband, who was captured by the Germans and escaped multiple times.  At one point he took refuge in a large pile of hay nearby the family home, where food was sneaked to him when possible.  He was recaptured and eventually sent to a forced labor camp in Germany where he remained until freed by the liberating American troops.  Quite an amazing story especially when told by someone who lived it first hand.  It makes me realize how fortunate my family and I are today and thankful for the many sacrifices past generations made for us.

Our visit with Adela lasted over an hour and was very emotional – she’s the type of person that makes you feel like you’ve known her a long time, even after just meeting.  We said our goodbyes and returned to the car.  Jadwiga offered to show us the family graves at the cemetery, which would help us fill in some dates (and photos, as many of the newer stones included a photo of the deceased). 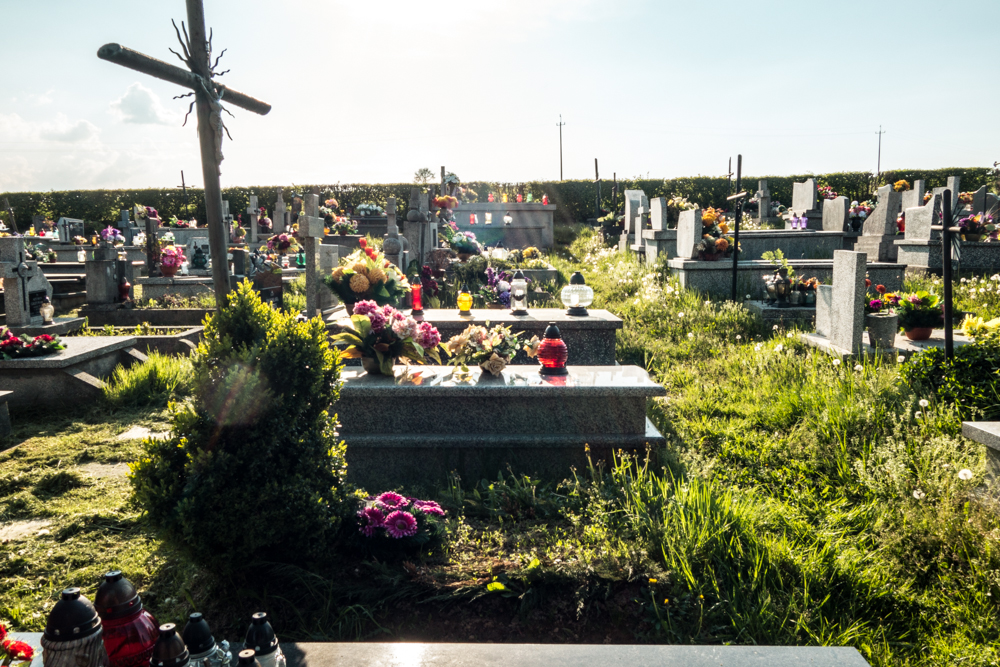 On the way back home from the cemetery, Jadwiga pointed out her grandfather Leon’s land and his old home.  Zenon turned the car and headed up the long driveway to the house (in the States we would never drive right up to a stranger’s home unannounced – another cultural difference).  The current owner was working in his yard and he came to see who the visitors were.

Much to our surprise, he and Zenon smiled and called each other by name – it turns out the man was a school buddy of Zenon’s and they had lost touch for a number of years.  Talk about coincidences! He showed us around the property and invited us into his home for a tour.  Although he asked us to stay until his wife returned, we begged off and brought Jadwiga home before heading back to Tarnów.

Mom has wanted to try gołąbki since we’re arrived in Poland so we searched for a restaurant that served it – no luck.  We ‘settled for a gourmet meal on the main promenade in Tarnów.  I enjoyed red borscht, grilled trout and a side of kapusta – such delicious and fresh food here in Poland.