This past April, my son and I had the most wonderful experience with our tour planned by PolishOrigins.  I wanted to share some of the highlights of our trip since it was so much more than what I was expecting.

We decided early on to focus on the Kraków area and we later discovered that two branches of our family tree were from that general area. PolishOrigins helped us organize our trip into three parts: several days of touring the city, followed by several days of research and more touring in the countryside, and then finishing with a final day in Kraków. For the first part, PolishOrigins set us up with fantastic guides for tours of the Wieliczka salt mine, a city tour of Kraków, Wawel hill and castle, and a tour of Auschwitz and Birkenau. 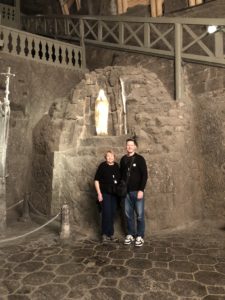 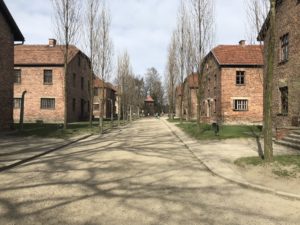 Joanna, the guide for the city tour was great.  She paced the tour for us since I have some breathing issues and needed periodic breaks.  She was extremely knowledgeable and just a truly pleasant person.  We also toured the underground museum in the Krakow town square and the Kazimierz quarter.

The unexpected high point for me was the second part of our trip when Zbigniew (Z), our genealogy guide did his magic.  I personally did not have any expectations for this part of our trip.  In fact, I thought that it might be rather boring going through church and other records and I didn’t think we’d meet any relatives.  The opposite happened …….

Zbigniew picked us up Wednesday morning and our journey began.  He took us to an area west of Kraków where we knew my maternal grandmother was from. On the way, we happened to pass the school building where Pope John Paul II went to kindergarten. When we arrived, we first went to the parish church in Bielany to begin our research. There we saw a bronze plaque outside the church door that had the names of villagers who were killed at Auschwitz during World War II. The name of one of our relatives, who we had heard died there, was listed. We knew then that we were at the right church.  We bought a candle from a nearby kiosk, placed it below the plaque and said a prayer. We went to the rectory but there were no priests there at the time, and we were told to return after the evening mass.  We did get to see the inside of the church including the baptismal font where my grandmother was baptized.  This church also has a miraculous painting, “The Miraculous Jesus of Bielany”, that pilgrims travel to see and pray.  There is a legend about how the painting floated down the river to this final destination and how miracles have happened. 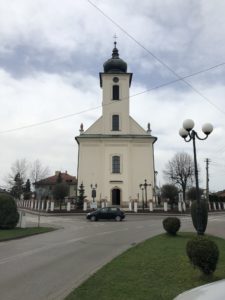 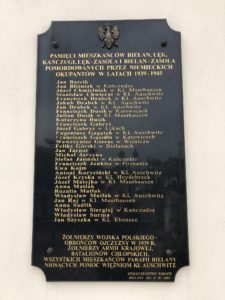 We then walked through the church’s cemetery, where we recognized many surnames from our family tree, but we were unable to positively identify any relatives’ graves.  We took some pictures but still needed to see the church records for confirmation.

After that, we visited the village of Łęki where my grandmother’s house had been. We had the address from some very old letters my mother had saved, but the numbers on the houses had changed over the years. Knowing the general area of where it would have been, though, Z stopped at a convenience store to ask if any “Koryciński family” still lived in the area. The cashiers didn’t recognize the name, but they were young, so Z asked to speak to the manager, and she recalled that someone by that name was living somewhere on the other side of the river. We drove across, and on the other side, Z stopped to speak with an old man who was walking down the street.  This man did know of a Mr. Koryciński who died, but had a daughter who lived in the neighborhood.  He told us what house to visit.  We went to the house and Z spoke to the woman.  She gave him some information, but it did not make sense at the time and we thought they were not related. The search was apparently at a dead end. (Later, after going through church records, we solved the mystery and indeed we are related to that person and her father.)

We went with Z back to the convenience store, where he stopped a woman who was walking down the street with her grandchildren.  He asked her if she knew any people by the name of Koryciński.  She was new to the area but suggested we speak to a woman who she thought might know.  Zbigniew drove us to the other woman’s house, and she was there, outside, gardening. He spoke with her at length.  She did not know but thought one of the neighbors would.  She took Z to 3 neighbors’ homes and the third was the charm. That neighbor directed us to a lovely 80-year-old lady by the name of Władyslawa, who invited us in for coffee and told us we needed to speak with another lady by the name of Zophia N.  She told us where Zophia N. lived and wished us good luck.

It was getting late now and it was time to return to the church to meet with the priest.  We were very fortunate that the priest was able to spend time with us.  Z warned us that oftentimes the priest was unavailable to do this.  We were successful in finding many records, including those of several very distant relatives we were unaware of, and we were surprised to find out that my grandmother had many siblings who stayed in Poland.  She came to the U.S. in the early 1900s with a sister and brother while the rest of the family remained in Poland. These records led to the realization that one of the graves we had taken a photo of in the cemetery belonged in fact to one of my great aunts. Also, the priest was willing to meet with us again the following day in the early afternoon to go through more records. 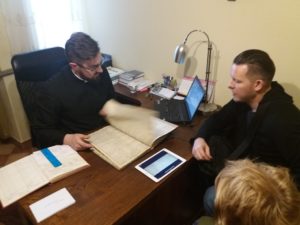 This presented us with a dilemma. According to our itinerary, we were to move on to Zakopane the following day to continue our tour to the south. We wouldn’t have time to speak with the priest again or meet with Zophia N if we continued on. Yet, even if we canceled those plans, the leads we had might only be dead ends. Because things were going so well though and more discoveries seemed possible, Alex and I decided to stay one more day in Łęki rather than travel to Zakopane as planned. Zbigniew arranged for the adjustments to be made to our itinerary.