We arrived in Warsaw, Poland on May 3rd from Atlanta, Georgia, USA for our 13 day journey which is shown on the map below. 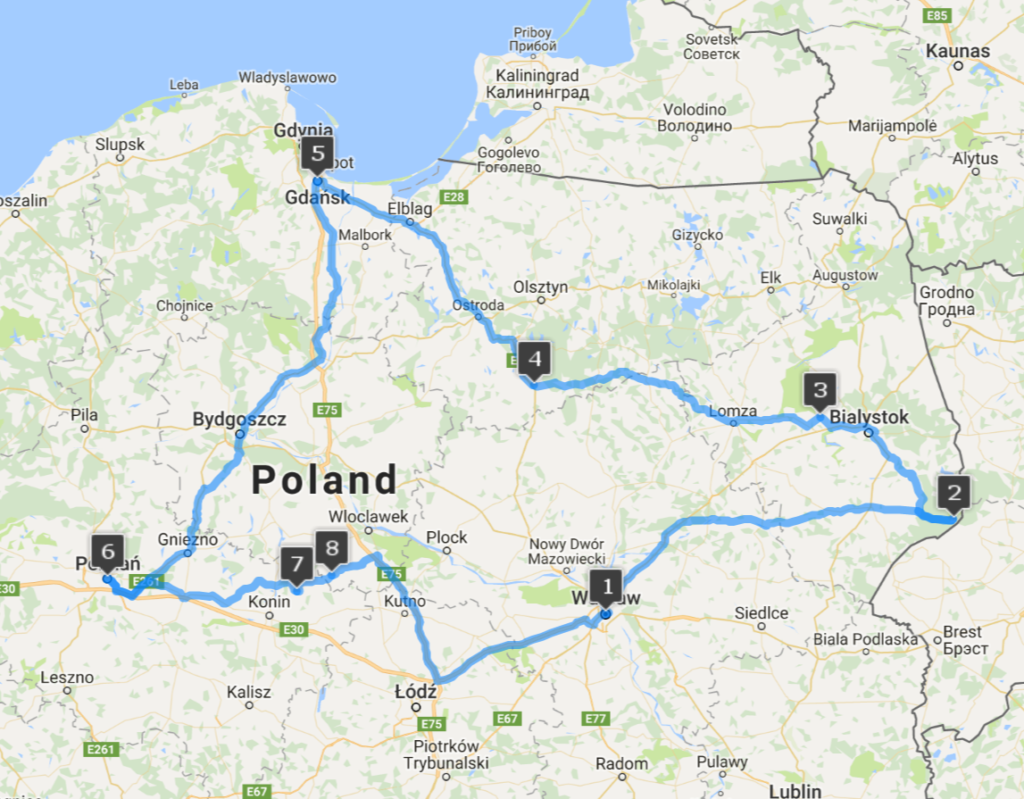 My journey begins, as my husband and I arrived in Warsaw from Atlanta, Georgia, USA to meet our tour guide, Zbigniew Stettner at Chopin International Airport. With much planning and anticipation our trip begins searching the homeland of my grandparents (Frank Wilinski/Stella Lojewska) whom immigrated to Chicago in 1912. They were young adults when they arrived separately here, as noted on ship manifest which I found.

On the way to our hotel we stopped and walked around the center of Warsaw. We walked passed where their new soccer stadium stood. We stopped and watched a small band playing Polka music in the square, where couples were dancing and people drinking and clapping to the beat of the music.

There were vendors selling their wares and exhibiting their artwork in the area. The buildings looked old but remember these buildings were rebuilt and restores since WW2. Most of Poland was destroyed during the war. We were told that the big cities were rebuilt using old design drawings and from old pictures of those places. We noticed that many of the shops had living quarters above them on the city squares. Warsaw had a very festive atmosphere that evening, despite the drizzle. We got back into our vehicle and headed to our hotel, the Willa Amfora before dark to get a good night rest for our adventure here in Poland.

Today, is our first day of our tour. Our morning started out with breakfast with Zbigniew (or I called him “Z”) at our hotel. We then traveled to Izbica Kujawska (about a 2 hour drive) from where my grandmother Stella Lojewska was born and grew up.

On our drive, Z mentioned his dislike for the high walls lining their main roads, which were like our interstates. He said it going north and south and 2 going east and west. These roads were only built within the last 20 years, since soviet communism fell. Their other roads were asphalt and gravel but all roads were very clean and maintained. Another note is that they had service areas with fuel, McDonald’s and KFC’s. When traveling, Z said he liked to stop at them for coffee and WiFi. We enjoyed stopping at Orlen’s fuel stations, too for coffee and snacks during our travels. We also noted that there primary fuel was liquid propane. They only used gasoline to start their engines. Once warm, the system switches to LP.The cars drive on the right side of the road like in the States. They drive at 145 kilometers speed which is about 90 mph on our roads. Once we got off the major road we began to see Poland’s beautiful countryside lined with yellow rapeseed fields.

We arrived at the Konin Archives and started researching records for my grandmother Stella Lojewska, born in 1899 in Izbica Kujawska, formerly Zagrodnica, Russia and other family members of hers. We left the Archives for the day and will return tomorrow to do more research.

Now we head towards Sompolno where my grandfather Wilinski was born. We stopped at The Church of the Nativity of the Blessed Virgin Mary and it’s cemetery across the street. Here we we found headstones with the name Wilinski on them and took pictures.

Then, we drove around the village and Z stopped and spoke to a man he saw in a driveway at his home and inquired if he knew of any Wilinski’s still living in the area. He directed us to a yellow house nearby where a family with the Wilinski name lived. Z knocked on the door and a man came out and introduced himself. Z spoke to him in Polish and told him I was from the US and looking for family.

We talked awhile sitting at his picnic table and realized there might be a connection to my grandfather’s side of the family. Mr. Wilinski, sure reminded me of my grandfather in looks and similarities. His wife came out and he introduced her to us. She listened and smiled, then went back inside the house. A few minutes later she invited us in for lunch.

She had a large array of food set out for us. Breads, meats, jams and some polish pastries. We talked some more, then it came time to leave and we thanked them for their hospitality. My heart was full of emotion as we exchanged hugs and said our goodbyes.

While heading to Lichen Stary we drove through Młynek where I have records saying my grandfather Frank Wilinski’s brother Walter was born in 1888.

We arrived at Hotel Stara Gorzelnia in Lichen Stary, about 35 minutes away. In Poland this time of the year, the days are long, sunrise is about 5:00 am and sunset is around 11:00 pm, so we packed a lot of activity on this long first day.

The books on the shelves below are the ones we used to do my research at the Konin Archives. 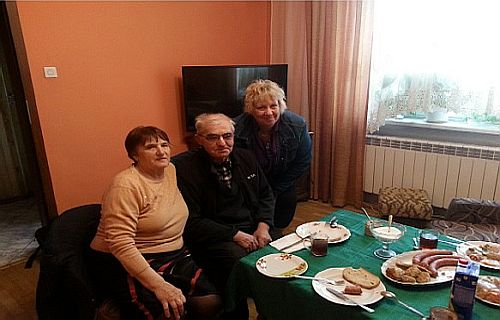