I had been working on our family genealogy for years.  My grandma got me started on the Rudzinski family tree when she lived with me.  It gave us something to work on together and let her tell me stories, we used her memory and prayer cards to get us started.  I remember going back to Indiana where she grew up and six of my great uncles still lived and asking my uncles how many siblings their father (Pa) had. I got differing information because he just didn’t talk about the family he left behind; it must have been too painful.  However, when I got to one uncle I hit the jackpot as he had Pa’s naturalization papers and his baptismal record.  The naturalization papers gave me his mother’s maiden name, and the name of his siblings left behind, Lucyna, Czeslaw, and Stefania. After much research I was still at a dead end.  My sister-in-law Becky kept encouraging me to go to Poland.  So after much research Kathy, Becky and I set off on our family journey to Poland in October.  I hired PolishOrigins for a two-day tour after working with the website and being an active questioner on their interactive forum section.  I can’t say enough about this site it is very valuable for anyone looking for family in Poland.  Everyone is so helpful; this was absolutely the highlight of our trip and exceeded our expectations exponentially.  Success to me would have been to go to Dlugokaty where my great-grandfather grew up and to attend mass at St. Leonardo’s in Grzebsk parish.

About two weeks before our trip I received a letter, including six pages of genealogy written in Polish and some pictures from a cousin. The genealogy was written by my great-grandfather’s nephew when he was visiting in the US. I had this translated into English for me and sent a copy of the original to our researcher and updated my tree.   She had also included the name and phone number of a cousin whom moved to Illinois and was Stefania’s grandson. I contacted him and he made arrangements for me to meet with his cousin Marek and his daughter Joanna (our translator) we decided to do that after the two-day tour so we could share what we found with them about our family.

Day One. Zen our guide, translator, researcher met us at Hotel Bristol for our adventure early on Sunday morning.  We were off to mass at St. Leonardo’s and Dlugokaty for a tour.  As we were on our way, Zen let me know that he had made contact with one of my second cousins once removed and we were to meet her on Monday afternoon.  We made good time and were able to go through Dlugokaty before mass.  It is a small berg with just a few homes not much to see, when we got out of town we turned around and Zen stopped beside a lady walking down the road.  He asked her if there were any Rudzinski’s still living there.  She said she was visiting so wasn’t really sure but did know they still had a farm in the community and told us where it was.  We then went to find the farm and stopped at the farm house next to the property, Zen was able to find out where the family lived in one of the small communities nearby.  At this time we needed to head to mass, so we did.  After mass, Zen talked to an usher about the family we were looking for, he knew exactly where they lived as they still attended mass at St. Leonardo’s.  We visited the cemetery where many of the family members were buried.  What an incredible tribute to those who had gone before us, the graves were decorated with candles and fresh flowers.

Once leaving the church we went to find the family that still farmed in Dlugokaty. We had no idea whether they would be home and if they were would they even care to meet with us.  There is no doubt in my mind where I got my hospitality gene; it is definitely from my Polish side of the family.  We pulled into a courtyard surrounded by a home on each end and an out building on each side.  The dogs alerted the residents to someone being there and out of the smaller home came my third cousin Miroslaw.  He invited us into the smaller home where the whole family was having dinner with his parents.  They welcomed us with open arms, out came the desserts and coffee so we could have a little social time and discuss why we were there.  His mother Elzbieta looked at me and said you look like us, which made me feel very welcome.  After some time, a whole meal appeared on the table, perogies, golumpke, cutlets, etc. We ate like we hadn’t eaten in a while and shared stories translated by her grand-daughter Paulina and Zen. 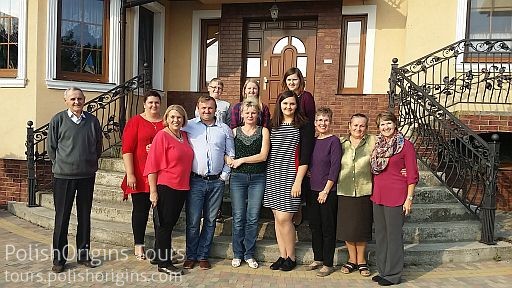 She then told us that she still had an aunt who lived in another community who was my grandmother’s first cousin Adolfa, Czeslaw’s daughter. We were excited she was willing to meet with us, and Elzbieta was gracious enough to go with us. 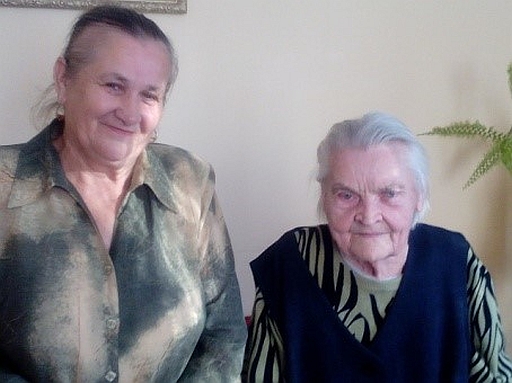 Adolfa pulled out her picture album and Zen started scanning pictures.  Much to our surprise my mother’s wedding picture was in the album.

Once we left Adolfa’s, Elzbieta took us to meet one of Lucyna’s grandson’s Bogdan.

It was a long day but so rewarding.  At about seven we were off to find our accommodations and something to eat.  We finally arrived at the country quarters after not finding any restaurant in the small towns we traversed through but at the end of a long gravel drive we came upon a building with white tablecloth dining and the ability to feed us even though it was late for dinner.  Zen and his staff had taken care of all of our needs, family introductions, food and comfortable sleeping accommodations.

Day Two. Zen took us to the National Archives to find the original records.  It too was an amazing success; we found the birth certificate for all five siblings, my great-great grandfather Julian’s and his marriage license to Kordula Dlugokecka (all in Russian). Once we left the archives we went to visit the wife of Konstanty, Stanislawa and daughter Isabella. Konstanty was the person who had written the original genealogy in Polish.  Elzbieta had shared the contact info for her cousin Stanislawa. We met with them shared pictures, stories and then a wonderful lunch, pork and chicken cutlets, red cabbage, bigos, perogies, potatoes, and of course desserts.

We knew when Zen picked us up the day before he had located a cousin Bozena, Lucyna’s grand-daughter and we were going to meet her Monday afternoon.  When we showed up at her home not only was she there but three of her siblings and spouses.  Again, desserts, drinks followed by a complete dinner.

The following day we met Stefania’s grandson Marek, his wife Bozena, daughter Joanna (our wonderful translator), his sister Danuta, daughter-in-law Martyna and her daughter Lidia.  We had such a great time we went to Grzegorz and Martyna’s home for dessert our last night in Poland.  All in all, we met 26 cousins in those few days in Poland. 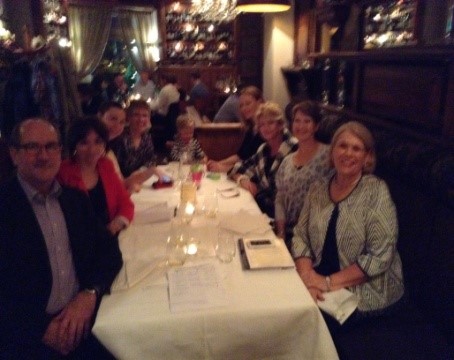 I am already considering what research I am going to have PolishOrigins do for me to learn more about my family history.  I am thinking I need to find information on the parents and siblings of my great-great grandparents.  I now have more complete information on my cousins living in Poland than those in the United States.  A family reunion is definitely in the works for 2017 of the Rudzinski cousins.  Zen – you were incredible thanks for the memories and should you ever want to visit the US please let us know.