The following is a translation of a Polish document of which I have a copy. This document was obtained by Francisca Dobecka in April of 1854 as a precursor for obtaining the necessary documents for passage to North America—the ship’s destination was most likely Quebec.

Notice that this document only covers the three Ciechanowski sons. Theodora died in 1841 and Josephine was probably either married or deceased by 1854. I assume a similar document exists for the Smielewski offspring, but I have not been able to locate it. Although no ship’s list has been found for the travel of the combined Ciechanowski-Smielewski families, it is fairly evident they traveled in 1854. One known exception is Thomas Ciechanowski who sailed with his wife and children in late 1866. The record for the travel of Thomas Ciechanowski and his family travel is shown below:

As can be seen above, Ambrose’s blood brother, Thomas, re-assumed the Ciechanowski surname by the time of his travels in 1866. I do not have the maiden name for Hedwig, the wife of Thomas. I wonder if he married his half sister, Hedwig Smielewski.

In 1854 the Smielewski/Ciechanowski clan most likely traveled through Quebec and Ontario Canada and probably settled there for a short time with other Poles in the area who were working on the Grand Trunk Railway for the Canadian Government. At some point the Poles decided to explore the rich lands of Michigan.

Below is an overview of the Ciechanowski & Smielewski families’ timeline: 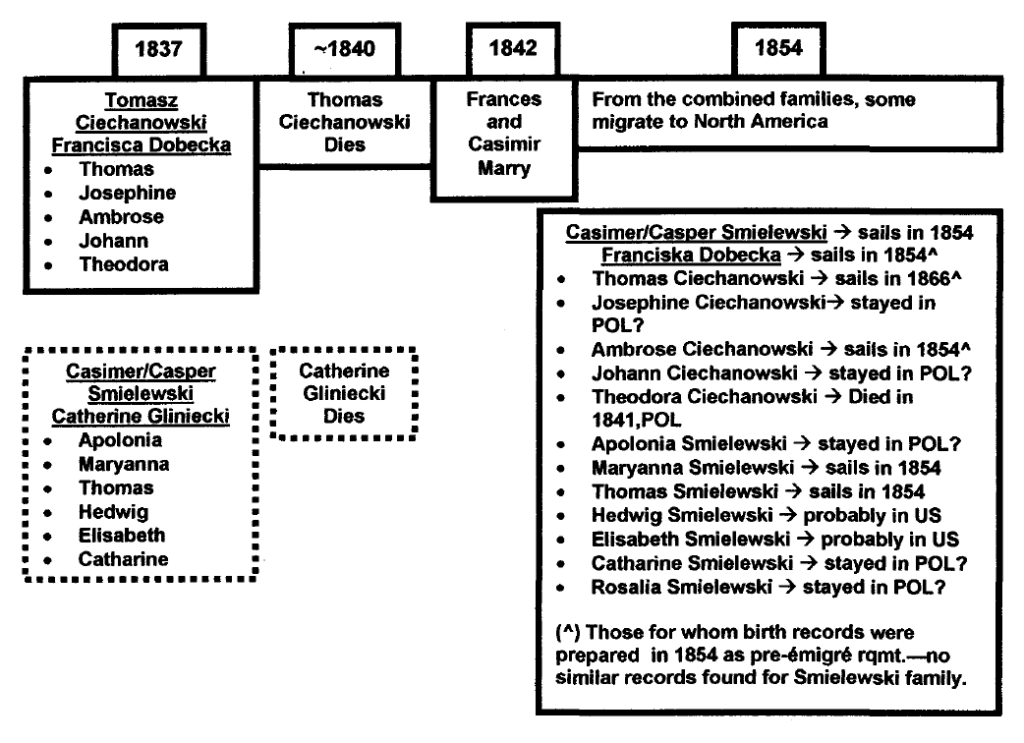 Thus far we do not know exactly when the Smielewski’s/Ciechanowski’s came to Michigan, but it was probably some time in 1855 or early 1856. They, along with other Poles, were attracted to the rich loam of the lowlands in the “Thumb” region of Michigan. Much of this land contained swamps, but the experiences gained on building the railroads in Canada provided them with the necessary knowledge with which to successfully drain the wetlands.

In late 1856, Ambrose Ciechanowski, still using the surname Smielewski, went with his half-brother Thomas Smielewski, to Detroit to make their initial purchases of land in Paris Twp. The land was purchased, in gold, for 50¢ per acre. They were among the first five Polish purchasers of land in this township. As shown in the following chart, these five purchases were granted their official Land Patents (from Washington City) on July 1, 1857.

First Five Land Purchases, by Poles, in Paris Township, Huron County
NOTE: (1) Ambrose Smielewski is ½-brother of Thomas Smielewski. Ambrose was son of Tomaz Ciechanowski and Francisca Dobecka, while Thomas was the stepson of Francisca Dobecka-Smielewski

The locations of the land purchased by the two half brothers–Ambrose and Thomas, within Section 34 of Paris Twp–Huron Co are shown below:

In 1860 Ambrose purchased 120 acres in Section 27 (immediately north of Section 34). To this he added 40 acres in 1865 to complete the purchase of the SE corner (full quarter-section) of Section 27. It is within this quarter section that the Centennial Home of the Ciechanowski’s (changed to Chinoski around 1900) still stands. A photo of this home, taken in 1990, is shown below:

A simplified Family Tree connecting the author with Ciechanowski and Smielewski ancestors of this article is shown below: 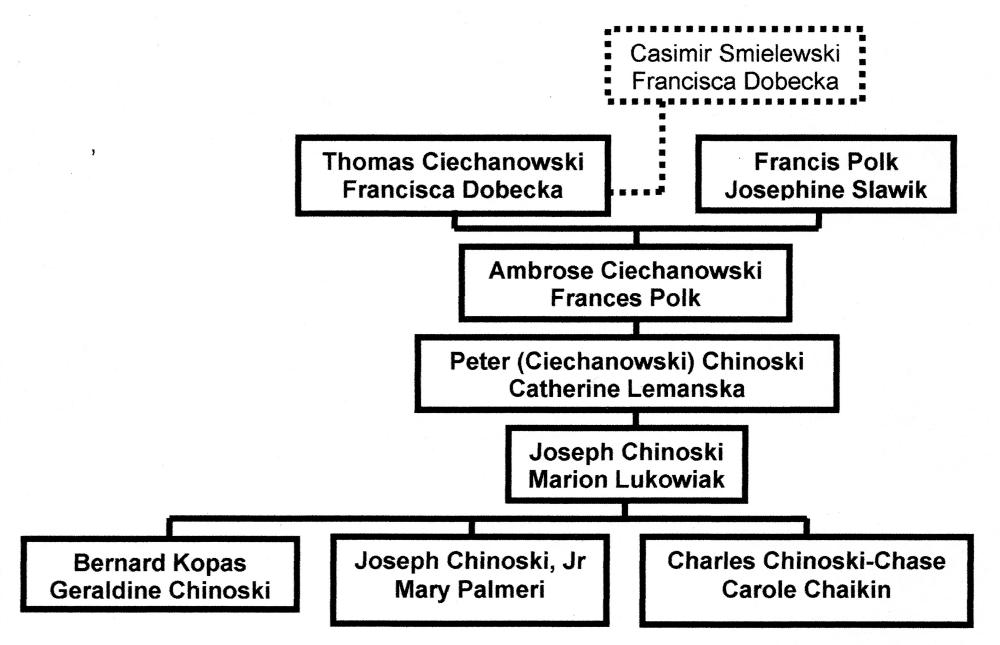 Source references for this article