My grandmother’s parents came to the US from Poland during the great migration wave of the early 1900s. Until the year 2000 or so, I never knew much about the details of their lives in the old country, other than the husband’s name Wladyslaw Wlodyka and his wife’s name Bronislawa Niemiec. For many years, my sole piece of genealogical documentation was my grandmother’s American birth certificate from 1915. It listed her parents’ home country as “Austria” at the time. A little map research lead me to conclude that their homeland was Galicia, given that they were ethnic Poles. Over the past 10 years, I gathered more information from my older relatives, as well as from online sites such as Ellis Island Records (www.ellisisland.org). I also stumbled upon a blog of Nancy Maciolek’s trip with Zenon. She highly recommended his services, which I kept in my records. In August 2010, I finally took the step of travelling to Poland in search of my roots, with Zenon as my guide. My goal was to search vital records at the churches of my great-grandparents’ hometowns, and to look for living relatives. I had no information about relatives remaining in Poland, although I knew that some branches did not emigrate.

Setting out on my journey, I had a mix of solid and flimsy information to work from. Luckily, Zenon and Nancy had actually photographed a census entry of Bronislawa’s childhood household in 1895 in the village of Kozlowek (Galicia indeed, east of Frysztak, between Tarnow and Rzeszow). This matched a mailing address for Bronislawa’s sister from the Cold War period. So I was fairly confident about the Niemiec connection in Kozlowek.

The Wlodyka connection was much less certain. Multiple sources indicated that they came from “Wysoka”, but there are several towns in Poland with the Wysoka forename. Family tradition went further to say that Wysoka was “near Tarnow.” Zenon and I identified Wysoka Strzyzowska as the most likely candidate. Fortunately, Kozlowek and this Wysoka are only 5 km apart (3 miles), so we wouldn’t waste too much time and travel if this Wysoka was the wrong one.

Armed with these leads and clues, I met Zenon at Krakow train station. He drove us through the green countryside to Kozlowek, my most solid reference point. We pulled up to the grocery store in the village center, walked in, and began asking about Niemiecs in the area. It was immediately obvious to me that Zenon’s services would be money well-spent. I did not know any Polish, and no one at the store spoke English. It would be this way for the most part, with the younger generations knowing English and the older generations — those who would know the most genealogy — speaking Polish.

The people in the store seemed surprised, perhaps a bit bemused, that a strange American would show up in the middle of the workweek with questions about distant relatives. They were eager to help, and directed us to a Niemiec woman across the street. She thought that we had a connection, and took us to speak with her parents. Alas, we could not establish a firm family connection, but I was encouraged that our “cold calling” method resulted in dialogue and helpful pointers from the locals. 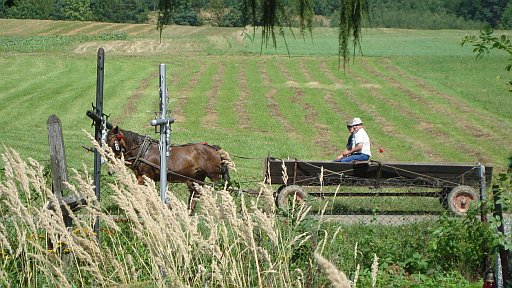