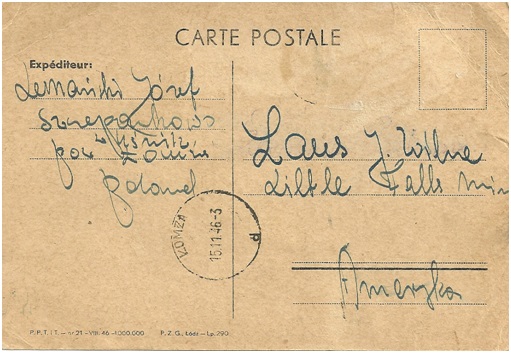 When sorting through my parents’ memorabilia, I found the above postal card, which indicated that a package, (# 216817 or # U6817), was sent on 12 September 1946 by my father, Louis J. Wilne. (“Wilne” is misspelled. It should have been “Welna”. The package was received and signed for by Josef (I could not decipher the surname) on November 15, 1946. The post mark is Lomza, Poland.  Since I was just 5 and a half at the time, I have only a vague memory of my mother, Freda Philipsek Welna, packing such a box. I think peanut butter was one of the items. I knew this was not my dad’s handwriting on the card.

While I had done considerable research on my four families, the town of Lomza was unknown to me. Still, I puzzled over why my parents had kept the card.  I wondered if there might be a family connection. I posted a photograph of the card on PolishOrigins, a website created by Zenon Znamirowski with whom I spent two wonderful weeks visiting the ancestral homes of my grandparents in 2008. (see my story: “Sitting down in my GGGrandfather’s house“)

First, Ute Wyatt responded: The name could be Józef Lemanski. The name of the town or village is hard to read, but it could be Konitz (now Konarzyce) pow. Łomza, Poland.  (pow. = powiat = county or district, Łomza with a line through the L that makes it sound like a “w”).

Then Elzbieta Porteneuve replied: Expéditeur/ Sender is Jozef Lemanski (o with ‘; n with ‘), from Szczepankowo near Uznik (z with ‘); powiat Lomza (L with /; z with dot .). Interesting to see the mixture of French, Polish and English on this international postal ACK. On first document Expéditeur is in French, Carte Postale as well, but second document  is in Polish/English.

A few weeks later, I received an e-mail!

After nearly a two-year break in search of information about my ancestors and specifically my grandfather, Josef Lemanski, who disappeared after World War II, I decided to do another Google search.  I entered the name, surname and village, Szczepankowo, pow. Lomza, because it was here that my grandfather, and my father,  Jaroslaw Lemanski, were born.   My mother, Teresa Lemanska, my aunt, Marianna Zebrowska, and my uncle, Miroslaw Zebrowski were teachers in Szczepankowo.

I saw the postcard image and the link to PolishOrigins.  At first, I could not believe it!  More than 30 years of research by my dad and until his death in 1979,  had yielded no results.  I was nine years old, an did not understand much, but I remember that it was very important for our family to find any trace of my grandfather. I was told that before the war, Josef  was a carpenter and worked worked for the community in Szczepankowo.

In disbelief, I clicked on the query on PolishsOrigins, in which Louie asked for help in deciphering the data on the postcard.  I immediately translated the card, as it was written in Polish. The towns are well known to me and, there was the name and signature of someone named Josef Lemanski!

Immediately, I felt tears in my eyes and thought, yes, it has to be the signature of my grandfather, Josef.  Impossible!  It’s probably not true.  When I compared the signature on the postcard with this signature on his marriage certificate, I knew it was my grandfather! While the war ended in 1945, I now had proof that he existed in 1946. This could be our new “last trace”.

I could not find a place to sit quietly and think.  I didn’t know where to start.  With tears in my eyes, I shut myself in a room and tried to regain my balance.  After half an hour, my first thought was, now what to do?  Where to start?  I looked at and analyzed the postcard.  I wanted a thousand things at once!  Alternately, there was hope and happiness, hope and happiness.  I had hope that my grandfather had survived, somewhere abroad or could not return home.

I believe this postcard was probably part of the Marshall Plan, officially known as the European Recovery Plan for Europe.  In Poland it was called United Nations Relief and Rehabilitation Administration (UNRRA). It lasted until 1947, when it was blocked by Russia. This postcard was discharged by the postmaster and signed by my grandfather as the receiver and “expediteur” to America.  My grandfather received this postal parcel for the community of Szczepankowo pow. Lomza, because he had been the Officer for Accounts and Taxes.

It is amazing that Louie’s parents kept this postcard; Louie, after 66 years, sent it to PolishOrigins and I was the “someone” who was waiting for it. The postcard is back in Szczpankowo, pow.Lomza, Poland where it will be treasured by my family. The circle is complete.