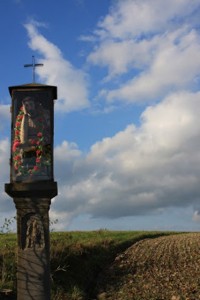 When travelling throughout Poland with foreign guests, they often look at the small structures built along the roads with great curiosity and ask about them.

They are made of concrete or wood. They are separate constructions or attached to trees. They are small like bird feeders or as big as a chapel. They have figures of saints or they are just crucifixes. They are road shrines.

Road shrines are something very common in Poland and we often do not pay much attention to them. They were always just part of the landscape. Only after visiting the Polish countryside with our guests do we realize that this is something that is not so usual. 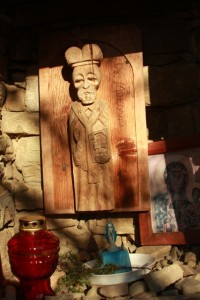 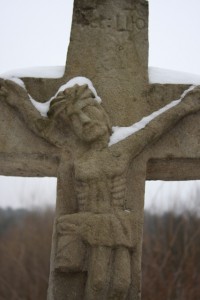 Where and why were they built?

Road shrines were built at the crossroads, at the village or town boundaries, at all places claimed to be inhabited by the evil forces or demons, for example where the murder was committed, or hangman was buried. At the crossroads, as per folk tradition and imagination, strange things may happen. These are places of evil spirits and lost souls.

Road shrines helped to familiarize the dangerous, uncertain territory. But they were also erected out of gratitude for some miraculous recovery from illness, coming back from war, end of a famine or epidemic.  They were supposed to prevent  natural disasters or were the penance for serious sins. And finally shrines were also a symbol of social status, so rich land owners or farmers have been founding them to show their status in the local society. That is why often there is a founders name and intention written on the shrine base.

No matter the reason they were constructed,  they are always the silent signs and witnesses of people’s faith. 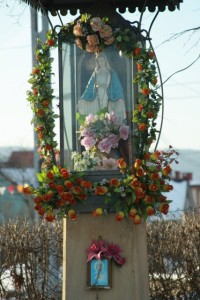 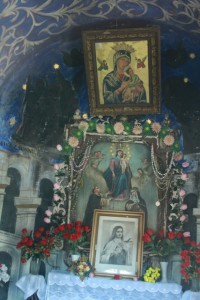 How do they look?

There are a few types of shrines that are very common, and you will see them more than others.  First of all, there are just crosses: roman catholic or orthodox, with the third crossbeam; they are common in the eastern part of Poland. On such crosses there is often the date when they were built and sometimes their intention. Many of them were erected after the abolition of serfdom or after an epidemic.

Another type of shrine is the small roofed boxes hanging on the trees. They might also have columns with a little cross or figure at the top. And finally there are small buildings, like little chapels with some painting or sculpture inside. Road shrines can be very simple but they can be very sophisticated as well, following the trends of art from the period they were created. There are certain regional workshops or schools where the famous shrines were created, for example in Orawa historical region, on Polish Slovakian border or Bartne famous for its masons. All shrines in these regions are in homogeneous, common style and were probably created by the same workshop and master.

One of  the most important elements of road shrines are the statues of saints. They can be wooden, chipped in stone or cast in concrete. Very often the figures are very simple, coarse and in irregular shape. It is not always easy to guess which saint is in a certain shrine. Quite often the only clue might be the element of costume or the saint’s attribute; an object that identifies a figure, most commonly referring to objects held by saints. In example St. Barbara is always presented with tower.

There is one saint who is very popular in Polish villages: St. Florian. He is a patron of fireman and  his sculpture is supposed to protect the area from fire. It’s easy to guess why he was so popular in 19th century and earlier, when almost all of the buildings were wooden and fires were a plague, destroying huge areas. St Florian is presented as a Roman knight holding a red banner and a pitcher of water. Often at his feet there is a burning house presented.

Another important saint is St. John of Nepomuk. His effigy is often located on the riverside, near the bridges, footbridges and fountains and is protecting from floods and drowning. His life story is amazing:  he is a national saint of the Czech Republic, who was drowned in the Vltava river at the behest of Wenceslaus, King of Bohemia. Later accounts state that he was the confessor of the queen of Bohemia and refused to divulge the secrets of the confessional. In remembrance of these events he is presented with the index finger on his lips or accompanied with angels holding a tongue, as a symbol that he kept the secrets assigned to him.  There is a great website where  you can find the database of road shrines of St John of Nepomuk (it is in Polish only, but there are some amazing pictures and a database of over 6000 shrines located in Poland, Czech, Germany and other countries: http://nepomuki.pl/nepomuk/ 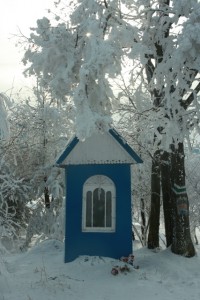 Although we often are passing them with indifference,  road shrines are still a living tradition. During the springtime most of them are whitened with fresh paint. They may have colorful ribbons fluttering in the wind and flowers which are regularly changed with the invisible hand of local hostess. In May, there is a beautiful tradition of gathering near the local road shrines, especially those devoted to Holy Mary, and singing the litany of Loreto. This custom is still popular in the villages and can easily be seen when travelling through Poland in May. 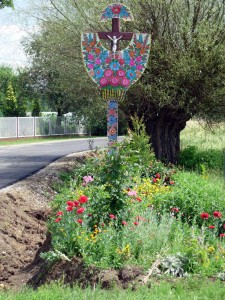 There are a lot of mysteries and disappearing customs connected with road shrines. Sometimes they are hidden or forgotten, but they are still a beautiful element of Polish landscape and a precious source of information about the lives of the people in the area. It’s really worth the time to stop near them for a while, and to find and read the inscriptions, or just to put some wild flowers on it to make it a living place.

At the end, my latest discovery from the Internet, there is an interesting article about road shrines erected in Central Wisconsin by Polish immigrants. You can find it here: http://www.jstor.org/stable/20148442 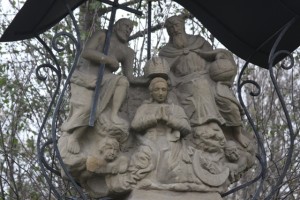 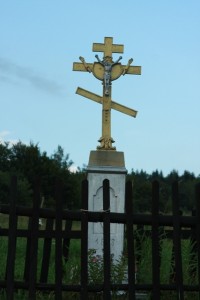