My trip actually started out in Ukraine, where my daughter and I went to see the villages, where my family were born and lived in Volhynia. At that time the villages were part of Russia. I had booked a tour with Volhynian Adventure Tours with Alex Brzhezytsky being our tour guide.

Prior to my Polish trip, I found information that my relatives were Masurian, Polish Lutherans, (Evangelical) who lived in the northern part of Poland dating back to the late 1700s. At first, this confused me, as Poland is mainly Roman Catholic, and I knew that my family were Lutheran, yet we were Polish, so that took some research to figure out. Hence my trip consisted of cemetery tours, seeing my villages, and also diving into the Archives.

Upon the appointed day of our arrival in Poland, Alex drove us across the Ukrainian/Polish border where we had to meet up with our tour guide Daniel Paczkowski from Polish Origins, who was going to drive us to all of the villages in Poland that were decided upon prior to our arrival. This trip was personalised to suit whatever and wherever I wanted to go, and was 14 days long. So much preparation went into this trip via Aleksander Zawilski, (from Polish Origins) who organized my tour based on my family villages, and which ones; as come to find out there are many villages in Poland with the same name.

Driving from the border into Poland the scenery was beautiful, very green and lush and trees covered the roads with their canopy.

We met Daniel and we stopped in the city of Suchowola, the geographic center of Europe determined in 1775. Suchowola was on the way to Suwałki, where we were staying and where my ancestors lived, married, and raised their families.

Our hotel was perfect, being just a block from the Evangelical Church in Suwałki, where my family worshipped in the 1800’s. The hotel was modern and the people who worked there were very friendly and could speak a little English, which was great because both my daughter and I could not speak Polish.

The next day Daniel and I drove to the Roman Catholic cemetery in Suwałki, where my second cousin and his daughter were buried. Prior to my trip, Aleksander had found out that my second cousin had passed away, along with his daughter due to a motor vehicle accident. I was very sad to hear this news, as I was looking forward to meeting him and his family.

We also toured the Evangelical cemetery to look for family names, as I did not know where my relatives were buried, or even what became of some of them.

After visiting the cemetery, we drove to Stara Chmielówka, where the first Lutherans had settled in 1793. The first Lutheran Parish in the region was founded in Stara Chmielówka in 1802 and a wooden Lutheran Church existed there up to 1844. This is the village where my Grandmother was born. I was very excited to see this quaint village with cattle in the fields, and the little houses standing along the road. Daniel had to ask a villager where the Evangelical cemetery was, so we found it but it was much neglected and very overgrown with bushes and trees. There were hardly any headstones left and the ones still standing were not readable. 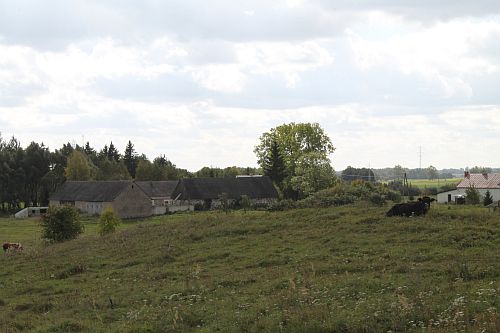 The same day we made our way to Sobolewo, where my great great Grandmother was born. We also visited a private cemetery belonging to the Sobolewo mill owners, and picked some tasty ripe apples along the way. There are different villages named Sobolewo, but the one that I was interested in is in the district of Gmina Suwałki County, Podlaskie Voivodeship in north east Poland.

On Sunday, all of us attended the service in the Holy Trinity Church in Suwałki, the same church that my great great grandparents attended. It was very touching to attend this service, even though I did not have a clue as to what the minister was saying. I also had an opportunity to take lots of pictures of the interior of the church, with the original organ that the congregation is raising money to get fixed. The Church was built in 1838-1841. This Church is the only currently active Lutheran temple in the Suwalki region. I was very happy to donate money towards the organ to commemorate my family names that attended the church with a plaque that will be displayed for whoever donated money to fix the organ. 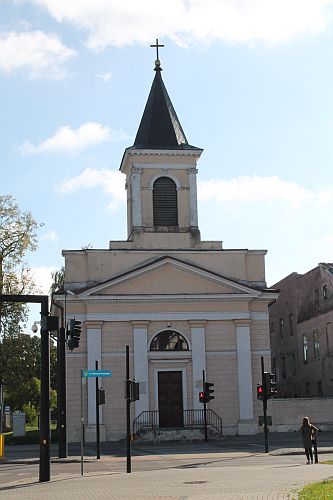 After traveling through Rutka-Tartak, a village where my Great Uncle and his family lived, we stopped at Folusz village and toured another cemetery founded by some mill owners.

The end of the day took us to Czerwonka, a village where my great great grandparents lived. We asked where the cemetery was, and found it in a field where we hiked over hills and plowed earth, quite a far distance from the road where we parked the car. This cemetery was quite remote. What a wonderful surprise to find a headstone of my family name, so that was an added bonus at the end of the long hike. This cemetery was also full of bush, grass and overgrown trees.

After traveling back to Suwałki where our hotel was located, we spent the next day visiting the Archives, where Daniel had to do all of the research as my daughter and I could not read Polish, German, Latin or Russian. Daniel found interesting details about my family, so that was really wonderful to receive more information on my quest. It was a quiet day of reading instead of fighting the bushes in the cemeteries.

The next day we traveled to Vilnius, in Lithuania for some sightseeing and to buy some amber. We toured the Amber Museum in Vilnius and also took a guided tour of the old city. It was a beautiful city filled with history, architecture and culture. We saw the three crosses, circa 17th century and saw the Church of St. Anne a 16th century Church, where Napolean stabled his horses in 1812.

We stayed in the old part of the city, so we could walk to all of the tourist attractions, which made it much easier to get around. It was a very informative tour and at the end of the day we had a beautiful meal at Senoji Trobele restaurant. The horse chestnut trees had dropped their nuts, so I picked up a few to take home. I can proudly say that I have five baby horse chestnut trees growing in my greenhouse. They will be planted on my property in Canada. I did not think that they would grow, so I was very excited to see the seedling push open the nut and emerge. 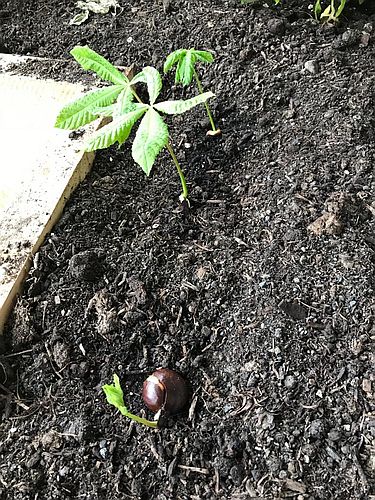