On our way back to Poland, we stopped at the Trakai Castle, a castle on Lake Galve. Construction started in the 14th century and Trakai was one of the main centers of the Grand Duchy of Lithuania. The castle held great strategic importance to the Duchy. The castle suffered major devastation during an attack by the Teutonic Knights in 1377. We also took a cruise on Lake Galve, where we could see how the Castle was protected and surrounded by the Lake. It was a very beautiful castle, with stunning stained glass windows and an interesting history. 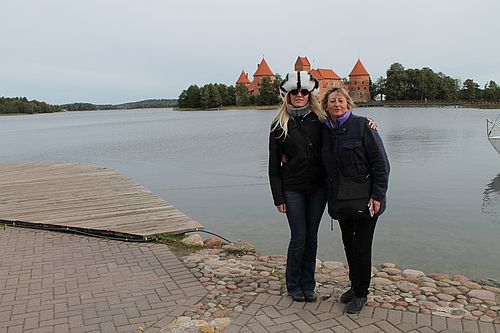 On our return to Suwalki, we stopped in Agrafinowka village, where my Great Uncle owned land in 1926. None of the family lives there anymore, and we did not find out any more information about the family.

After Suwalki, we drove to Goldap, but along the way to Goldap we stopped in Kolonia Przerosl and Rakowek village to talk to some people who might know the whereabouts of my family. We did not have much luck there, but the people were so friendly, inviting us into their homes and serving cake and coffee. They gave us the phone number of a relative of mine that had moved to Germany, however, when Daniel tried the phone number later, it was out of service. 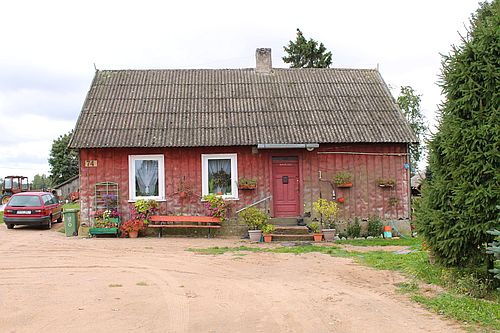 There are two Przerols, one is Przerosl town, and one is Przerosl Goldapska. We had stopped in the town of Przerosl and were guided to a house where we thought one of my relatives was a teacher, and she had boarded with these people. I could not ascertain whether she was related to me or not, but she had the same last name that I was researching. We looked for the Lutheran Cemetery there and finally found it on the road towards Stanczyki. Apparently, it was used quite recently but was still overgrown with bush and trees. There were no inscriptions of my family name in that cemetery either.

We then continued on to Przerosl Goldapska to find out where the cemetery was there. We were in luck when a lady walked with us to the cemetery, as it was in a field that we would never have found. We crossed a stream and continued about a ¼ mile through a muddy field around a copse of trees, and finally arrived at our destination. Again the cemetery was overgrown, but we had fun looking at all the headstones that were readable. When we got back to the village, our new found friend gave us a bucket of water and a brush to wash off our shoes, as the field was very muddy. My daughter graciously helped me by scrubbing my shoes off. It was quite a mess. What a friendly lovely lady that helped us. I found that most of the Polish people were very friendly and willing to help out when they knew that you came from a different country. Daniel took pictures so I have a lovely remembrance of my new friend. 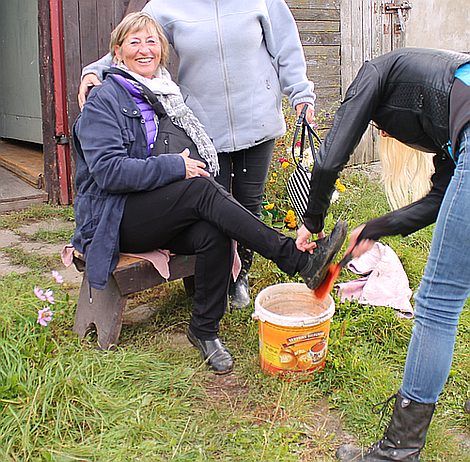 We then drove to Bledziszki, to check out the cemetery there. The scenery at Bledziszki was beautiful. It was hilly with rows of trees and grass. We did not find any of my ancestors in that cemetery. 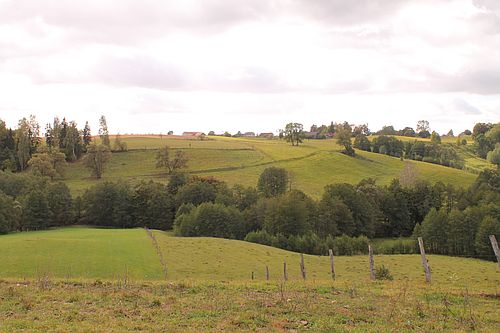 Onward to Dubeninki, where we toured the evangelical cemetery there. There was a commemorative plaque of WWI where the evangelicals lost their lives. The village had a beautiful church with the original organ, and a cairn outside of it. The church is a Catholic Church, but at one time it was a Lutheran Church. I saw a family name inscribed in the cairn, so that was exciting, except I did not know where the name fit into my family tree. Perhaps one day I will find out. Also, I saw a typical headstone holder of the German Evangelicals in the cemetery. The carving is of oak leaves and acorns in the concrete. When on our quest for Evangelical cemeteries, we saw a few of these headstone holders ornately carved. It was very interesting to see this part of my family history. 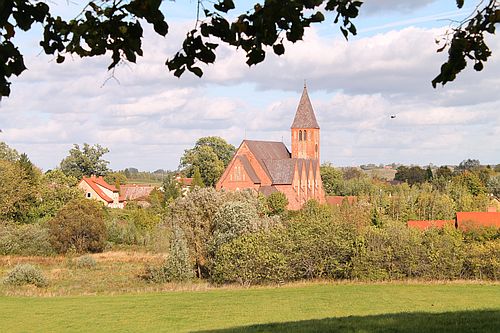 We could not continue on without stopping at the viaducts at Stanczyki. The two large railway viaducts were very impressive. The north one was constructed between 1912 and 1914, the south one 1923 to 1926. They connected the town of Goldap and Zytkiejmoy. WWII trains carted military and building supplies on the tracks. After WWII the Soviet Army dismantled the railway tracks. The viaducts are now on private land. 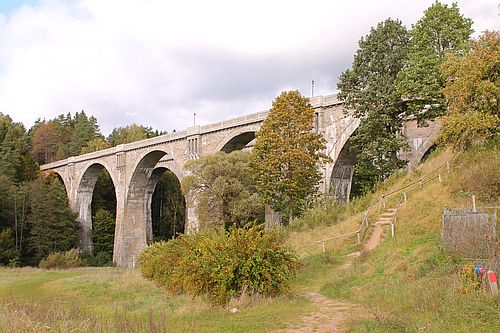 The next stop was Czarne, where we toured a cemetery that was on a hill beside Rospuda Lake. It was a very nice setting for a cemetery. (I am becoming an expert in cemeteries, I fear). There was no bush to fight, no ticks to avoid, and one could see the lake from the few gravestones that were there. Needless to say, there were no immediate family members buried there that I could ascertain. Speaking of ticks, both Daniel and myself teased my daughter about her new hat that she purchased in Ukraine. It looked somewhat like a Cossack hat. She wore this hat when touring the cemeteries, so we thought this hat was a “tick magnet.” We told her the ticks would just be vibrating waiting for her and her furry hat to come along. We did not encounter any ticks, so that was good.

There was also another cemetery at Czarne, a cemetery near the lake in the bushes. It also just showed the basement of the graves with overgrown trees growing out of the graves. In Poland, there are two Czarne villages of the same name.

After a full day of visiting cemeteries, we got to our hotel in Goldap, a beautiful modern hotel that was also a spa. Needless to say, we took advantage of a facial and swimming. It was very relaxing after being on the road and touring many, many cemeteries.

In Goldap, we toured the Goldap Evangelical cemetery. It was very nicely laid out, without being overgrown. I found a family plaque with the Brodowski name (my Great Grandmother’s name) which was exciting for me. It had a little iron fence around the plot, surrounded by trees. I knew my family members would rest easy in this beautiful little cemetery. 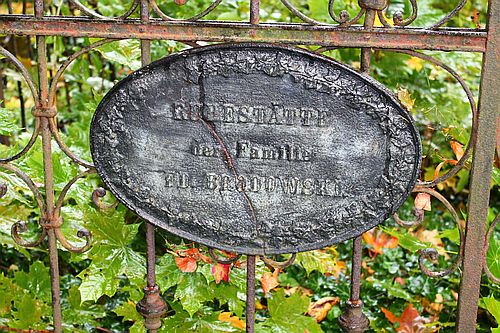 The next stop was Grabow, having five cemeteries to visit. Grabow was where my Great Great Grandfather was born. I was hoping that I would find some family names (Weiher) there, but I had no luck.

The first Grabow cemetery was the oldest, beside a Catholic Church. This Church was at one time a Lutheran Church. It had a very impressive fence, which looked very ornate. It had seen better days, but the beauty of it was still there to behold. The crosses in the cemetery were cast iron, and some were very ornate. This cemetery was well looked after, so it was very nice touring around this cemetery.

The second Grabow cemetery was found by asking a lady in a grocery store. This gave Jenna and I a chance to buy Hazelnut Vodka, which turned out to be our favorite. You cannot buy Hazelnut Vodka in Canada, so that was a real treat to bring home. The cemetery was in the bushes next to a bridge. It also was overgrown, with very few readable headstones.

The third cemetery we located was near the road to Royznsk Wielki. This cemetery was on private land, and Daniel had to ask permission to walk up to the copse of trees where the cemetery was. The owner was not very happy to accommodate us, but Daniel explained we came all the way from Canada to look for relatives headstones, and he agreed to accompany us to the cemetery. This cemetery was also run down, with a cattle path running through it. The owner’s cattle probably used this as a shelter, as there were cattle surrounding the copse of trees. The cattle were quite tame, with the calves following us up to the house after our tour. My family were farmers from way back, so I thought it quite fitting that cattle rested among the headstones. I am sure my ancestors would have approved.

The fourth cemetery lied on the right side of the road leading to Pogorzela. It only had two legible tombstones, and was also in a copse of trees and overgrown.

The fifth and last cemetery was next to the road next to the Catholic cemetery. It also was amidst a copse of trees in the middle of a field. Before the cemetery, we had a view of the ruins of a brick building. The owners of the land were not home, but Daniel and Jenna went into the copse of trees and there were only a few headstones, with basements also exposed. Trees were also growing out of the basements. At this point in time, I waited by the car and took pictures of the ruins, which interested me. I was sort of disappointed that the owners were not home as they could have told us what the ruins were.

We stopped in at Banie Mazurskie to see the cemetery there. I also could not find any relatives names on the few headstones that survived. They had a beautiful church there that we did not go into, but looked very nice on the outside of the building. 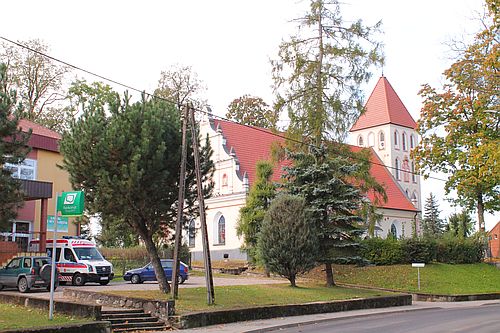 Driving up to Malbork to see the Teutonic Knight castle, the scenery was really pretty with large trees on either side of the road, almost like driving through a tunnel. I took many pictures of the picturesque roads.

The Malbork Castle was a former stronghold of the Teutonic Order, built in the XIII century, and besieged by Polish forces in 1410 after the victory in the battle of Grunwald. Until 1466, Malbork was the capital of the Teutonic Order State. It was a huge castle, with vine-covered brick walls, and turrets. It took about 3.5 hours to tour this castle, it was so large but very impressive. It gave one a sense of going back in time to see all of the artifacts and finding out about the history of the region, and the Teutonic Order. 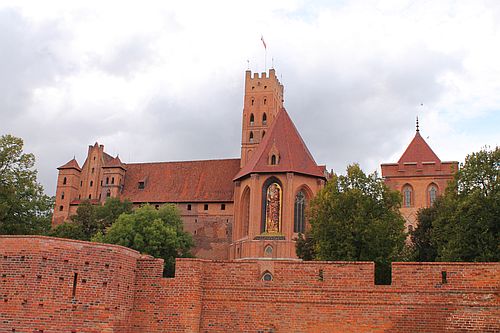 It was nice to get to Gdansk, after the long tour at Malbork, to relax in our hotel room that was right on the river. We stayed in the old town, which was so nice as one could walk from place to place. We had a tour guide who showed us the highlights in Gdansk. We toured the Old Town of Gdansk where the wealthiest people lived, and saw how the people decorated the outside of their apartments. Some were very ornate. We also toured the Solidarity Museum, which was very moving to see the history and what the Polish people went through to have the first trade union in a Warsaw Pact country that was not controlled by a communist party. 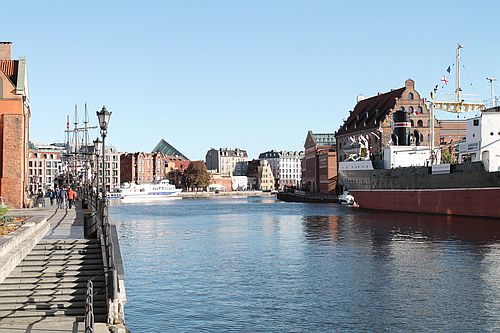