I booked the trip through PolishOrigins.com, a company that specializes in heritage-type trips for people who are exploring their Polish heritage and are researching their family trees.  The company was started by Zenon Znamirowski, a Polish guy about 40 years old and he has been doing this for many years now.  Although he has several other guides going at the same time with various groups, he personally took care of my trip acting as my driver, interpreter, and genealogy guide…as well as a great tour guide and travel companion in Poland generally.  I had shared a lot of info with him that I already had discovered prior to making my final arrangements and we discussed my goals and interests extensively before for the trip. Armed with this knowledge he had visits set up at various parishes, museums, etc. before I even left. 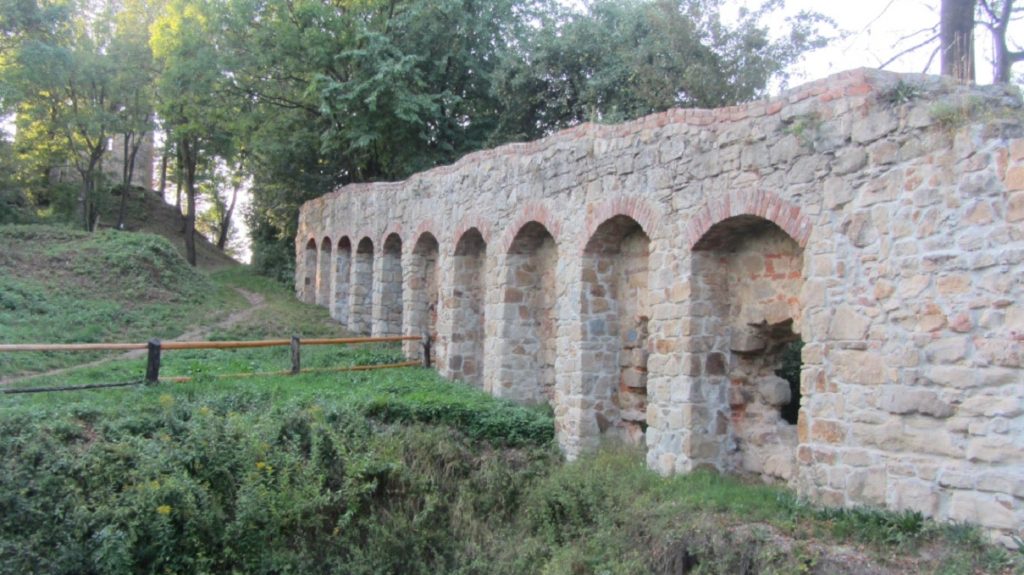 Ruins of Some Castle in Poland

I had trouble sleeping on the flight I was so excited…I had a short layover in Munich (a city I will have more on later) and then arrived in Krakow at about 3pm Poland time.

My itinerary for the first week was to start in Zarzecze, the village in which my great grandfather, Wojciech Michnal, was born and raised.   The drive is about two hours east-southeast.  Zarzecze is pretty small so we decided to stay at a hotel in Nowy Zmigrod which is about 5-10 miles south of Zarzecze.

Zen suggested that we take the long way to Nowy Zmigrod so I could see some of the countryside rather than just see the Polish version of an interstate highway. This proved to be a good decision because the countryside in Malopolska and Podkarpackie (the two regions in SE Poland from which my father’s family comes) is absolutely beautiful.  It borders the Carpathian Mountains to the south which make up the border with Slovakia to the south and Ukraine to the east and thus is quite a hilly and rural area.

On the way to the hotel we made a couple of stops.  First, we stopped at the ruins of a 15th century castle…

And then we stopped at one of the many ancient wooden churches for which this region is so famous:

The church was in disrepair and smelled as old as it was.  The Church was dedicated to St. Martin of Tours and the domed steeple is typical of those in the region and reflects the influence of Eastern architecture.

The rest of the trip to Nowy Zmigrod was uneventful. However, I was struck by a couple of things during the car ride.  First, the great number of roadside shrines to one saint or another.  Sometimes they were in sight of one another there was so many.

Second, so many people walk around here which is understandable considering how pretty it is.  The countryside has a Sound of Music quality to it.  Also, people drive really fast here considering how winding the roads are.  I’m glad not to waste time in the car but jeez…

I learned quickly that my pronunciation of everything needs work…including my own name.  I suppose everyone is entitled to pronounce his/her own name however they want to but there is a correct historical pronunciation as well and I don’t pronounce my own name correctly.  The correct pronunciation of Michnal is MEEK-null.  Accent on the first syllable with the “K” sound somewhat guttural so that it sounds like a cross between a K and a G sound.

The town in which we were to visit the next day – the village from which Wojciech Michnal emigrated – is spelled Zarzecze and is pronounced zar-ZETCH-eh.  Zarzecze, which literally means, place across the river, is a village within sort of a township called Debowiec (demb-AHV-iets) and is, in fact, across the river from the main village in that township of the same name – Debowiec.