In September of 2018, my husband and I engaged PolishOrigins for a 3 week customized genealogy tour to visit the ancestral villages of all four of my grandparents. We had many memorable experiences, but these events in particular had impacts beyond what I ever expected or imagined. This is one of two stories in which the effects of our discoveries in Poland continue to have a ripple effect. Also, this story will give you some idea as to the sense of how the PolishOrigins guides work their magic! Think treasure hunt… 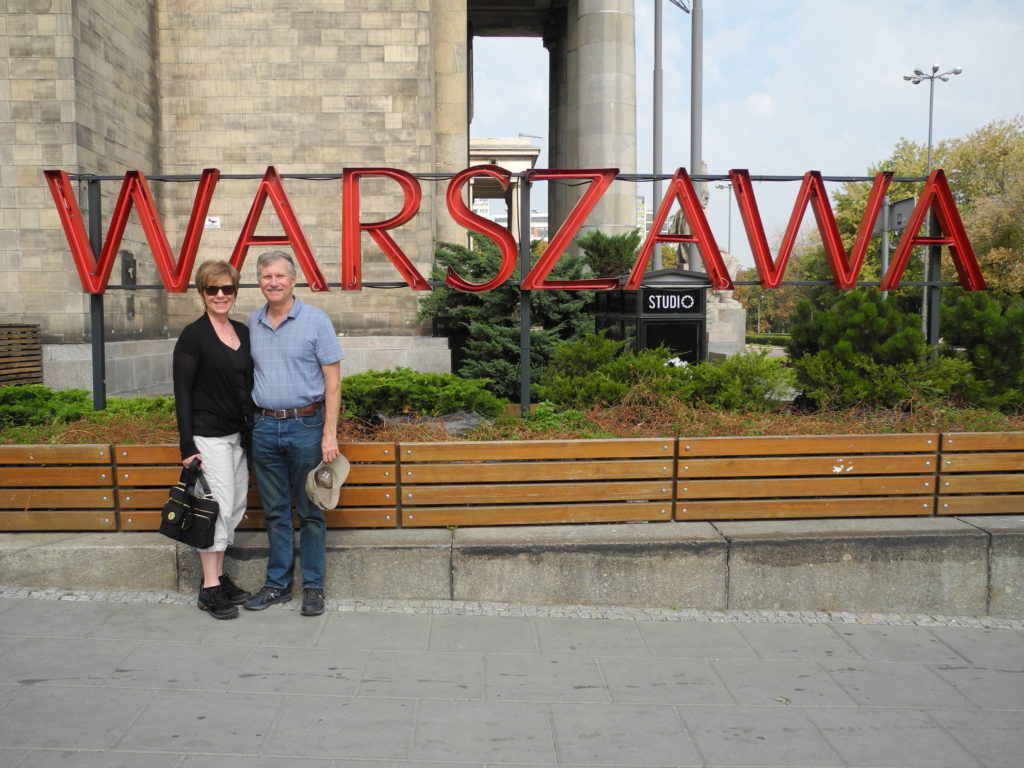 It began when we left Nidzica (Warmińsko-Mazurskie Voivodship) and arrived in Wieczfnia Kościelne (near Mława) which is the parish for my grandmother’s village of Uniszki Zawadzkie. I already had a good bit of documentation and information on my grandmother, Stanisława Lewicka, and her family. We did not plan to spend more than several hours visiting the church, cemetery, and possibly the civil records office for information on one ancestor I had not been able to trace, Bronisław Lewicki (the younger brother of my great grandfather). We stopped at the civil registry office first and that is when the adventure began. 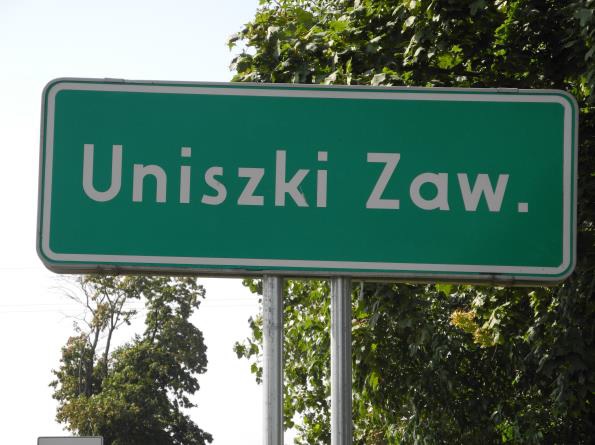 The woman in charge of the civil records office was definitely a gate-keeper in every sense of the word. She was in charge and did not seem open to the idea of doing any research for us. Fortunately, our guide, Zenon, took matters in hand. I sat silently as a very fast conversation in Polish bounced back and forth between them. It seemed to be a bit of a heated exchange at times as I watched the negotiation unfold. I was fully expecting to be shown the door, when to my surprise, she softened and actually went to the cabinet where the old Parish books were stacked. She found the 1933 marriage of Bronisław Lewicki and Władyslawa Marianna Szumińska. She also found the 1938 birth of their daughter, Krystyna, and the 1941 birth of Jan, son of Franciszek Lewicki and Janina nee Osińska. We thanked her, and as we headed toward the door, she whispered something at the last minute to Zenon. As it turned out, the gatekeeper slipped us a secret hint: she suggested we go to the village and ask around for Jan Lewicki.

Now, here is where I feel we should have background music playing for the rest of this story. It should be the theme song from the old American television series “Mission Impossible”. Ok, now that you have that song in your mind, I will continue the story. 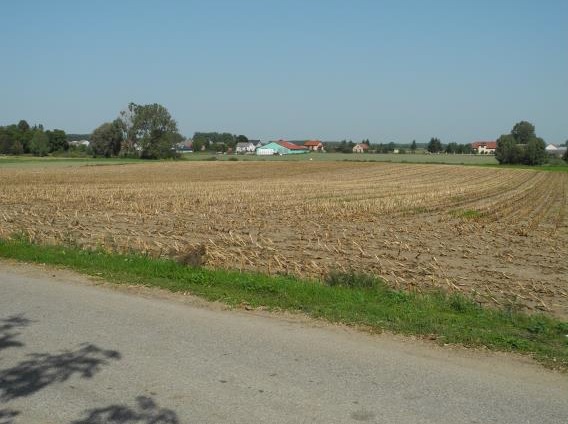 Armed with this knowledge we head for the village where Zen stops people on the street asking for the
home of Jan Lewicki. After several inquiries, we get the address and drive to his home. A young man sees us approaching and greets us. He speaks with Zen and invites us into the back yard. There, we find an older woman sitting on the porch smoking a cigarette. Soon, another young man comes out to see what was going on. Zen speaks with the woman. Sadly, Jan passed away last year in December, and the woman is his widow. One of his sons, Jacek (the young man who came out to see what was going on), offers to help show us the house of another family member, Kazimierz Lewicki, living in the neighboring village of Windyki.

Jacek is very excited about the opportunity to be involved in this adventure and does not take no for an answer. So, he hops into the back seat of our car with my husband, and I sit up front with Zen driving. Jacek is very happy and very animated about the adventure. He gets a bit loud with his directions from the back seat as he debates with Zen about which way to go. I can’t help laughing. It reminded me of the family parties we had when I was a child. All my Polish uncles would gather in the basement to drink and play poker. They would get loud and start yelling at each other in Polish – I felt right at home.

We finally find the home of Kazimierz. As we get out of the car to approach the house, Jacek warns us that Kazimierz was “suffering illness” and that we should not be surprised if he refuses to answer the door or acts oddly. We all just look at each other, and then cautiously approach the front door. Zen knocks several times. No answer. Then, a man passing by in a construction truck stops and tells us that Kazimierz was taken to the hospital two days ago, but there is a sister who takes care of him. Her name is Jadwiga, and she lives on the other side of the village. 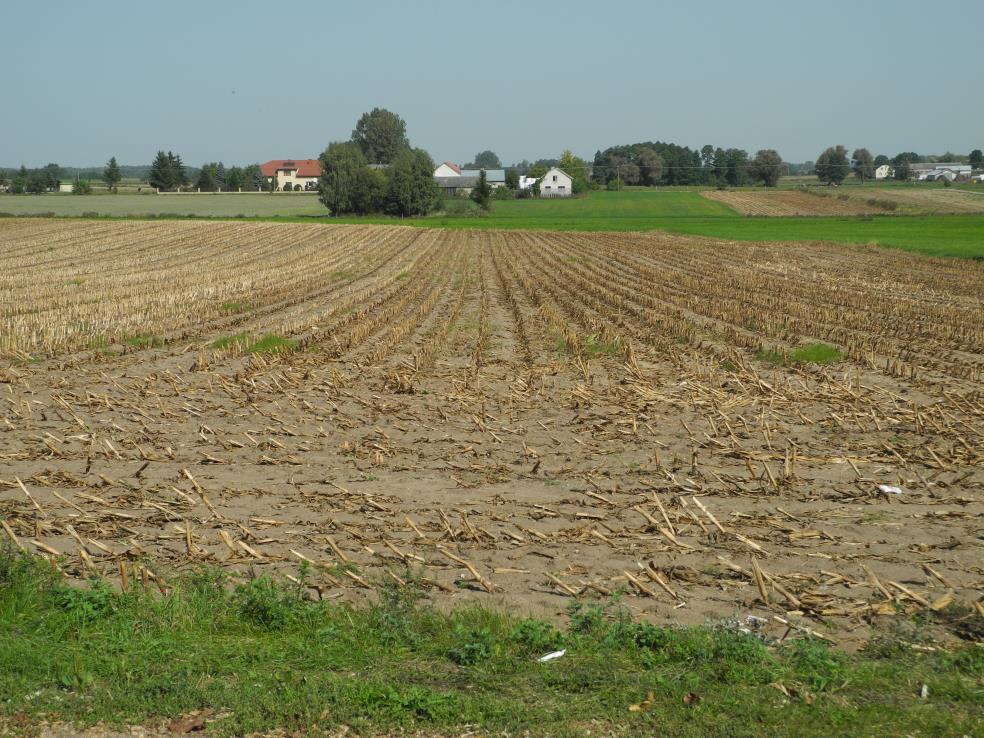 So, off we go to search for Jadwiga with Jacek and Zen again debating about the best way to get there (in America, we call this being “a back seat driver”). I think this is the most fun and excitement Jacek has had in a long time! After some searching, some wrong turns, and asking people, we find her house, but a neighbor comes out to tell us she is not home and will not be returning for quite a while.

At this point, we decide it is time to take Jacek home. On the way, we pull over by a construction site because we recognize the man in the truck who told us earlier about Kazimierz being in the hospital. Zen talks to this man while the other workers gradually stop one by one and gather around us out of curiosity. Once this man hears the whole story, he tells us that one of the workers on this site is related to the Lewicki family. He calls him over, and a young man approaches us. Zen asks him about Jadwiga and he gives us her full name and phone number. Zen talks to this young man further and discovers that he is the son-in-law of Włodzimierz Lewicki, brother of Jadwiga and Kazimierz! So, Zen asks him for Włodzimierz’s phone number.

Zen calls Włodzimierz right on the spot and begins asking him questions about his parents and grandparents. It turns out that he is son of Bronisław and Marianna Szumińska – which makes him my cousin! Zen asks him if he would like to visit with us, and he agrees. Zen then asks him where he lives – and get ready for it – he lives in Nidzica which is where we had just driven from earlier that morning to get to Uniszki Zawadzkie!

Before heading back up to Nidzica, we drop Jacek off at his home. I get out of the car to thank Jacek for his help, and I give him a small gift – a shot glass with the Golden Gate Bridge on it. He is still very excited and animated as he accepts the gift. Then he takes my hand and gently kisses it – the old fashioned way. I am grateful to Jacek for his good natured help and for his colorful addition to our experience. I will not forget him, and perhaps he will think of me when he uses the shot glass 😉

We peacefully drive the 45 minutes to Włodzimierz’s home in Nidzica. He is standing at the top of the stairway leading to his apartment with his wife as they greet us and invite us inside. It takes Zen about 30 minutes to explain to Włodzimierz and his wife, Wanda, exactly how we are related. For some reason, Włodzimierz has it stuck in his mind that we are related through his grandmother and could not let go of that thought. Finally, Zen and Wanda convince him that it is his grandfather that was the brother of my great grandfather. 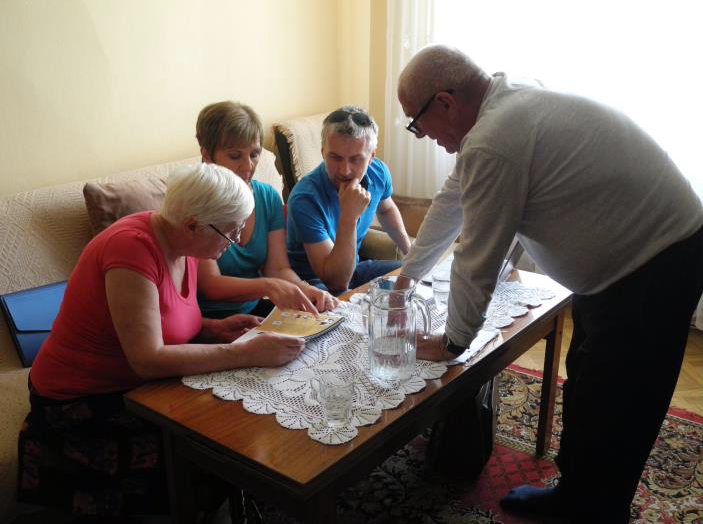 Finally, the lightbulb goes on and he gets it! That is when the hugs and kisses begin and the tears come. He is incredibly moved and happy to meet his cousin. We share information and pictures about our families, and we take videos and pictures of us together. Włodzimierz keeps telling us how happy he is to finally meet his cousins from the United States. He said he always told his children that he had family in the USA, but they would not believe him. He couldn’t wait to give his children proof and a good old fashioned “I told you so!” I also had the opportunity to test an old family story I heard from some of my Lewicki cousins in the United States. Through Zen’s interpretation, I ask Włodzimierz if he ever heard any family stories about the Lewici ancestors somehow being connected to the Cossacks. He laughs and nods his head saying that his father and grandfather used to tell him stories about that, but he didn’t remember the specifics as to exactly how they were connected. How amazing that the same old family story was heard on both sides of the ocean! 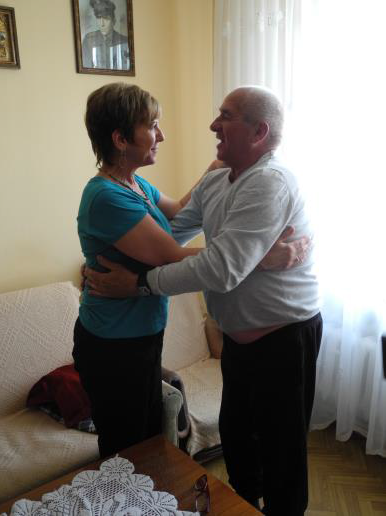 We left Włodzimierz and Wanda with full hearts to return to Wieczfnia Kościelne to offer a Mass for the Lewicki family and to visit the cemetery. Włodzimierz asked us to tell him when the Mass was to be said so his family could attend. We found the grave for Bronisław and his wives, and we called Włodzimierz with the date and time of the Mass. It is now late evening. I am feeling amazed, very happy, my heart feels so full, and I also feel very exhausted. I am amused at how what I plan and what life presents in the moment is so very different. I thought I was just going to have a brief visit passing through my grandmother’s village… well, it seemed she had other plans for us. Nice work, babcia. I hear you laughing. 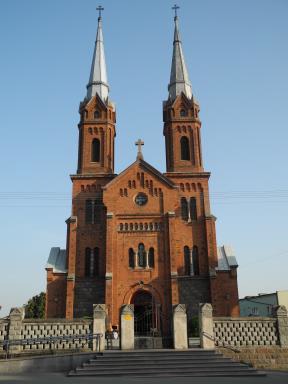 Later that year, I sent Włodzimierz and his family a Christmas card with prints of the pictures we took during our visit with them. In reply, I received an email from one of their children with pictures of their family. Hopefully, we will visit them again when we return to Poland. But, that is not quite the end of the story…

It is March of 2019 and 6 months after our trip to Poland and our visit with Włodzimierz Lewicki. I am surprised to receive an email from someone in Poland who is a member of the My Heritage website. She writes to me in Polish asking about an ancestor we seem to have in common: Bartłomiej. After comparing information, we discover that her ancestor, Bartłomiej Lewicki, is the brother of my 2nd great grandfather, Michał. We are cousins. Not only was I able to introduce her to her American cousins, I was also able to introduce her to her cousin Włodzimierz Lewicki in Nidzica. She did not know about Włodzimierz and that branch of the family. And just to make the paying it forward complete: she lives near Olsztyn – not very far from Włodzimierz in Nidzica! So, not only did PolishOrigins provide what I was not expecting at all – a flesh and bood, heart-felt connection with my Grandmother’s family – I was able to pass on the gift full circle! The ripple effect continues…

Due to the GDPR (General Data Protection Regulations) introduced in European Union the names of the living persons have been changed.