The next morning we were off to the Sanok archives—a smaller less formal center–where we would look through church documents of births, deaths and weddings. 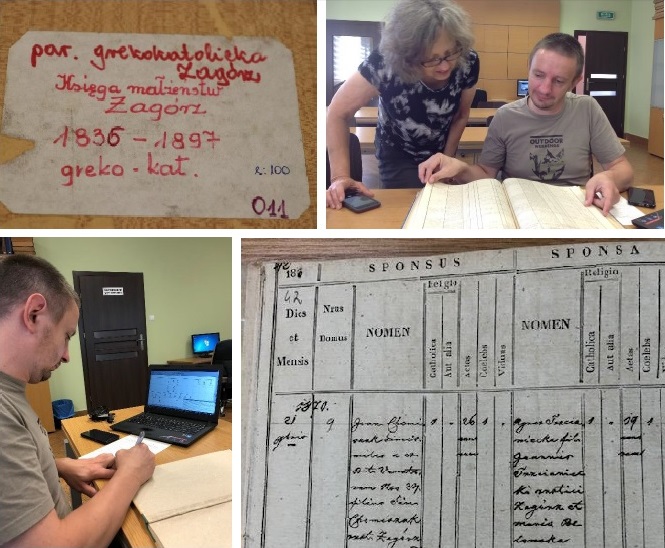 “Z” added names to the family tree of Homiszczaks he had on his laptop. We saw the marriage of my grandfather’s parents—Jan and Agnieszka—in 1870 and the births of their children—Rosalia, Julia, my grandfather Antoni in January 1885—his brother Andrew, whose twin sister Catharina died as a small child. Agnieszka—the last of 11 children born to Jan and Agnieszka. 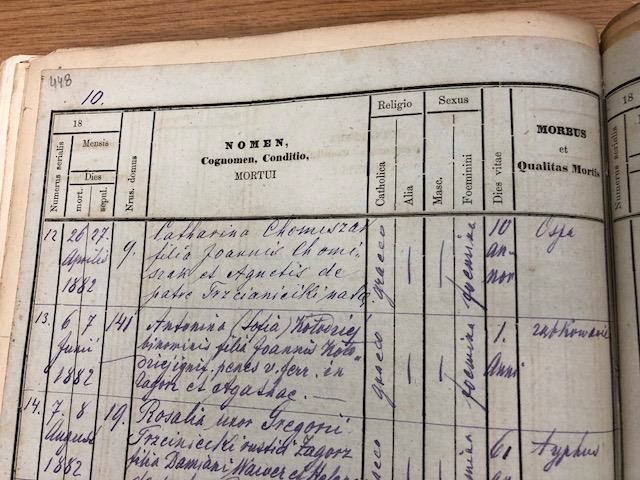 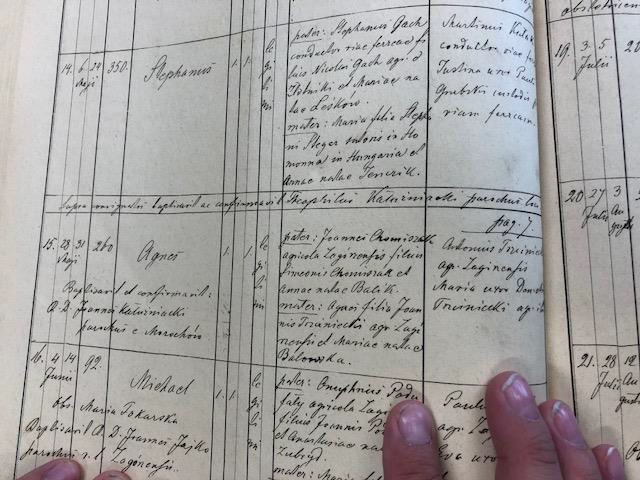 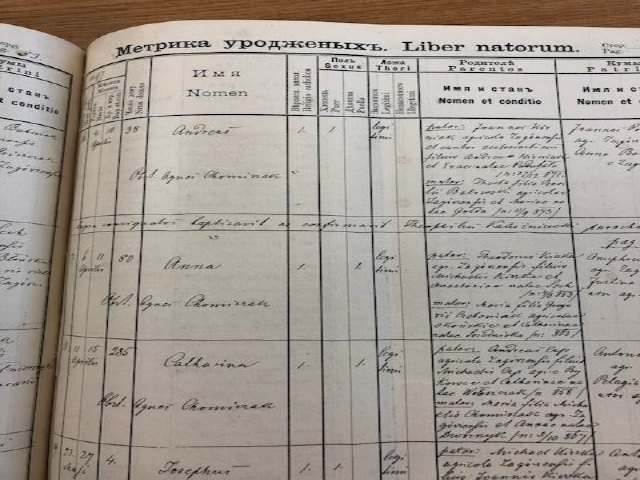 Then confirmation of something my one remaining aunt Irene had told me. She said her grandmother Agniezska had been a midwife, and here was proof on the church records, which listed the midwife present at each birth. She seemed very busy after the birth of her last child in 1890.
And here too was the marriage of my grandfather’s sister Anna to an ex-soldier named Josef Esler—a significant find because my grandfather traveled with Josef Esler to America in 1903, arriving at the port of Baltimore. 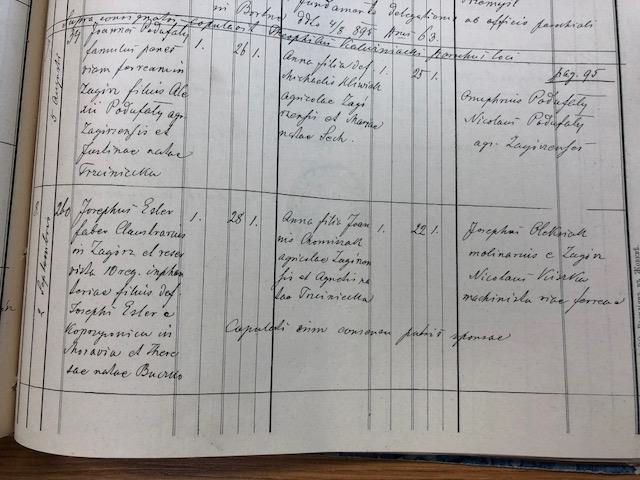 One final important document—a deed to the last piece of land Antoni’s father owned in Zagorz—plot 260 on those earlier property pages. It was on the far side of the Oslawa River. Jan’s children were named on the deed. Antoni was there, but his name was crossed out, perhaps because he was in America. “Z” also found another name on the list—that of a Jewish money lender. “Z” said Antoni’s father apparently borrowed money to send Antoni and several other children to the United States. 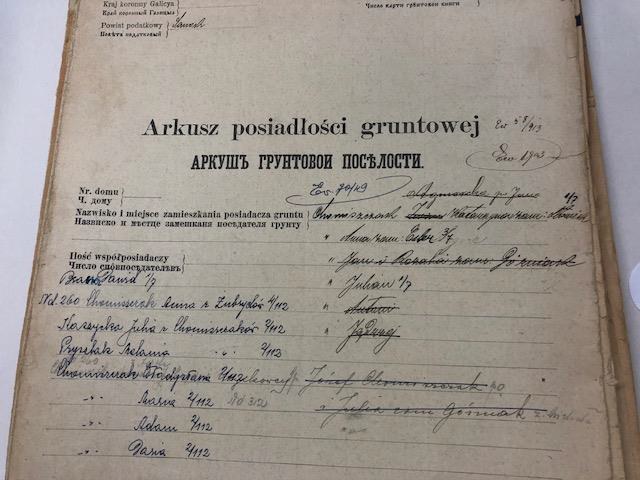 Our job was finished at the archives, so we went south to Zagorz again, stopping to get a photo of the town sign. 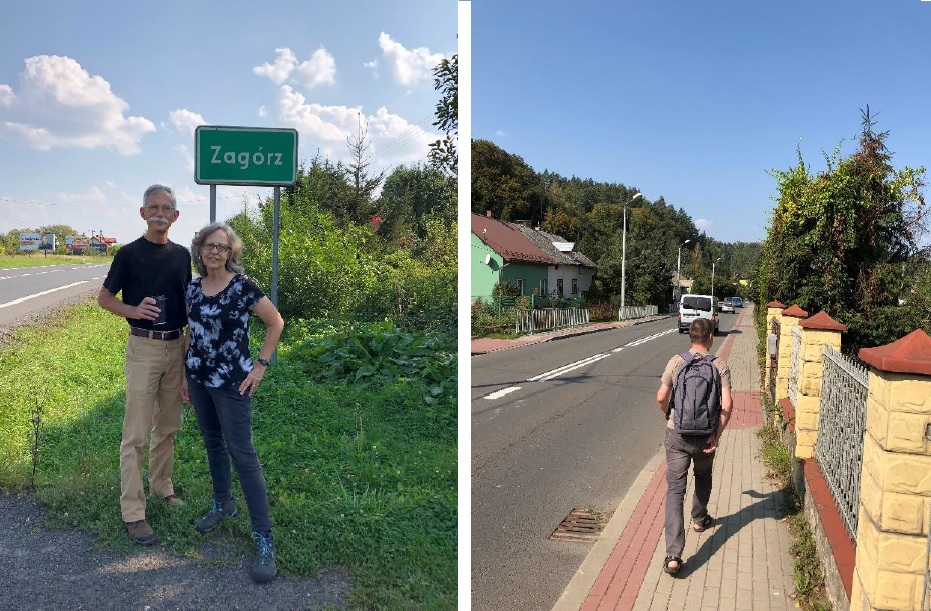 Into Zagorz, with “Z” on the trail of Homiszczaks again. He had heard there was a retired school teacher whose name was Homiszczak. We stopped at the house. He wasn’t home, but his brother-in-law next door called him, and he and his wife hurried home to talk to us. No, he wasn’t directly related, but his wife got her laptop and phone and started searching. Jack pot. Two sisters lived nearby. They handed the phone to “Z”. 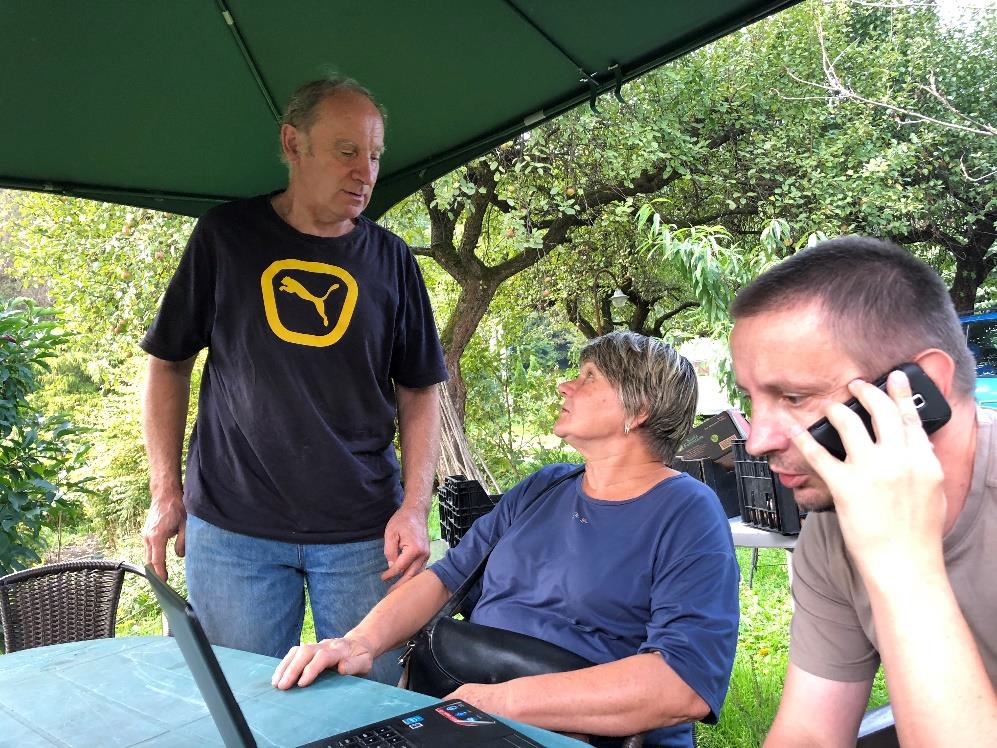 Back in the car, we drove through Zagorz again to the main road, turned right and drove over the Oslawa, turning on a lane a short distance away. The first house we stopped at wasn’t the right one. We were directed farther down the lane. In through a gate. “Z” went to the front door as Allan and I waited in the yard. Out came “Z” with 78-year-old Natalia Matusz, the granddaughter of Joseph Homiszczak, my grandfather’s older brother. Natalia was my second cousin. She and “Z” talked. She went back inside and brought out a photo of her grandfather Joseph. 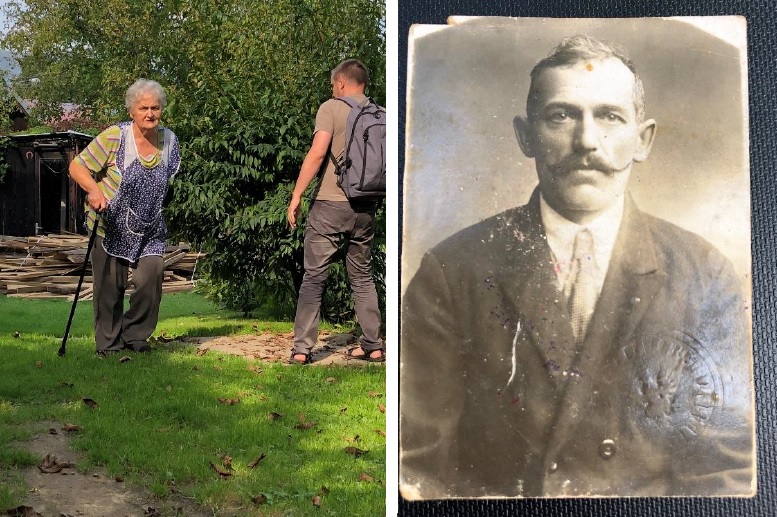 “Z” told me we were on Homiszczak property–the plot 260—and he said the house next door was the old Homiszczak house, built before the turn of the 20th century, now renovated and the home of Natalia’s sister Osanka. This was where my grandfather lived before immigrating to the U.S. It was hard to imagine 10 or so people in this dwelling. I walked all around snapping photos. I could hardly believe what I was seeing.

In the meantime, Natalia summoned her 68-year-old sister Osanka, and here she came with a family photo album. We sat down at a picnic table and they shoved photos at me. “Z” tried to quickly translate. I snapped photos with my phone. Here was Natalia and Osanka as children with their mother. 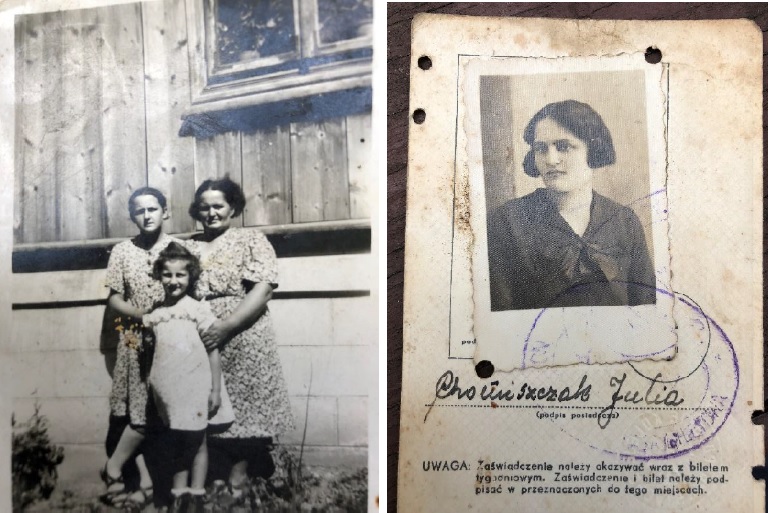 Julia, who was my father’s first cousin, a cousin he never knew about. Here was Julia’s sister Maria who went to Detroit and who was buried with her sister Daria in the old Zagorz cemetery.

Definite proof of our relationship came with a photo of my grandfather’s sister Julia, her husband Michael and their 4 children sent to Poland during World War Two. One of the boys had on an army uniform. I knew about Julia. My father told me about eating at her house in Pittsburgh. I have a post card her son Joseph sent to his uncle Anthony, my grandfather. But I had never seen a photo of Julia. 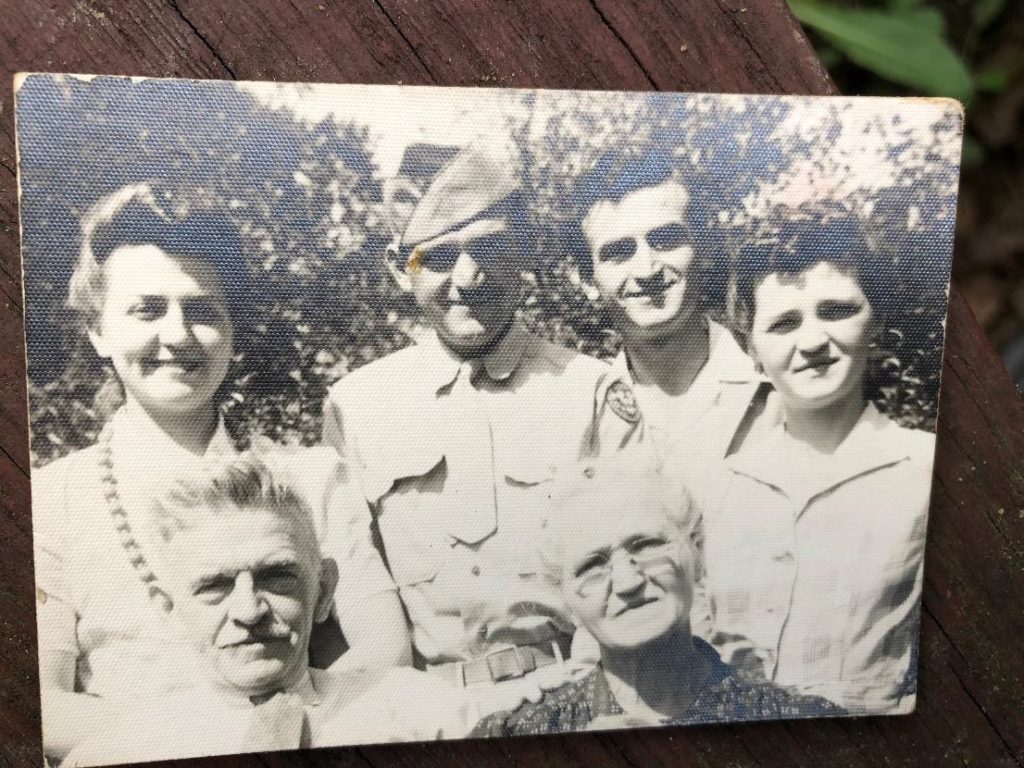 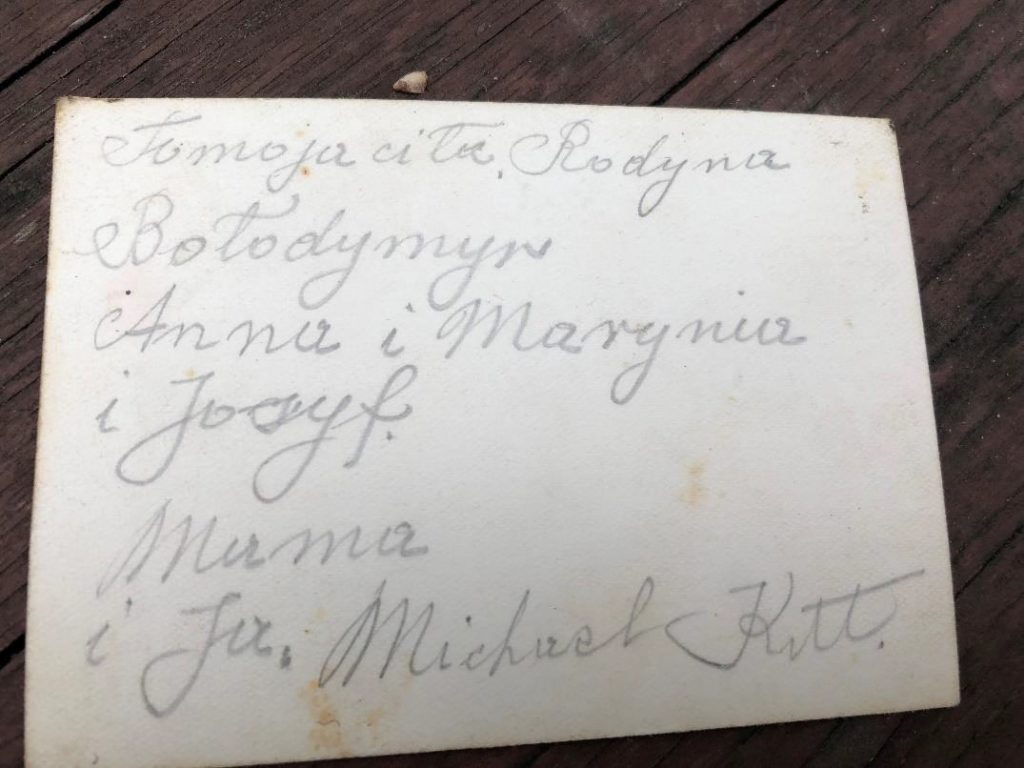 “Z” and Natalia went into her house to take portraits off the wall to show me. Here was her mother Julia and Julia’s brother Ivan who had to go to Russia in the 1920s because he had become a Communist. Natalia also talked about other Homiszczaks being sent away from Zagorz in 1947 as part of Operation Vistula, a forced resettlement of Ukrainian minorities. 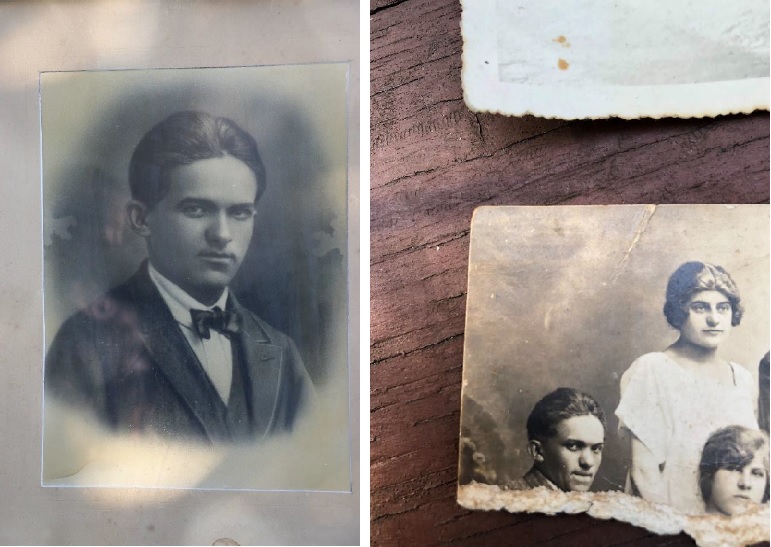 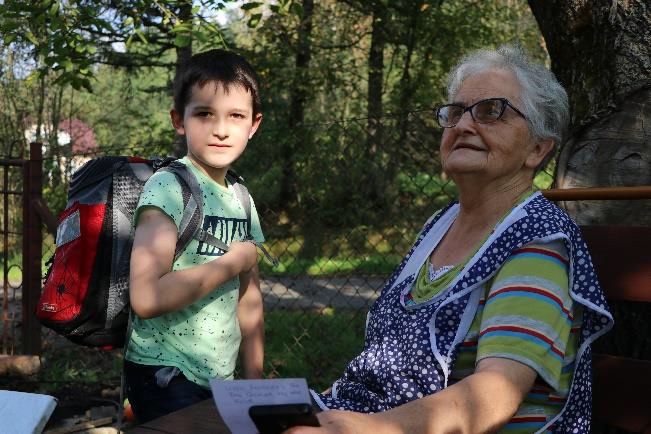 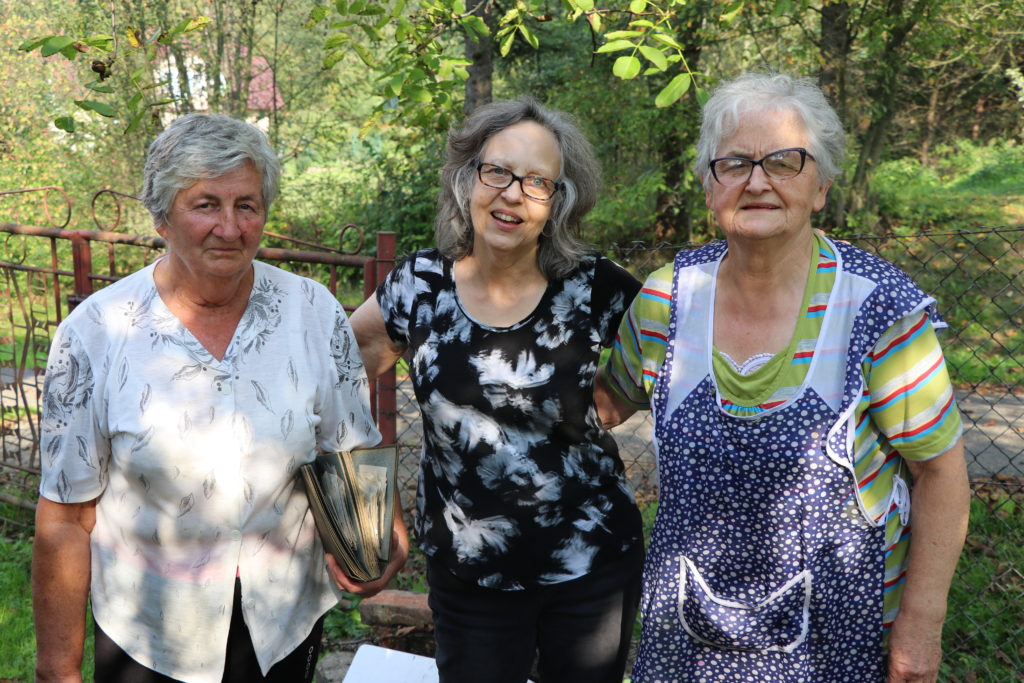 And then it was time to go. My two days with “Z”, an amazing researcher, were about to end. My head was spinning. The search for my roots in southeast Poland had brought me more than I could ever have imagined. Thank you, PolishOrigins—this all happened because of your efforts to help me find my family!