The long put-off trip to Poland to search for my eastern European roots started September 18, 2018 with a flight from Chicago to Frankfort, Germany, and a Lufthansa flight to Krakow.

The next morning, we met our genealogy guide Zbigniew Stettner from PolishOrigins who came to pick us up in his Citroen C4 Picasso. Taking major Highway A4, we cruised along at 140 km per hour-about 85 miles per hour.

Arriving at the archives in Premysl, 11 km from the border with the Ukraine, we started our research.

I had to sign documents. My passport was checked. We could never have done this without “Z.” He got out his laptop and pulled up property records from Zagorz from 1853. This was my grandfather’s village. Checking property records, he found plots of land associated with my family—not only Homiszczak’s (this was the Polish spelling, also Chomiszczak , both pronounced Home-uh-shack) but Balik, Balowski, Sech and Trzciniecki—my great grandmother’s family.

“Z” compared a current satellite photo to the maps and determined an island in the Oslawa River next to a Homiszczak plot of ground was no longer there. The river had shifted in 125 years. He found the number of a house associated with the family. 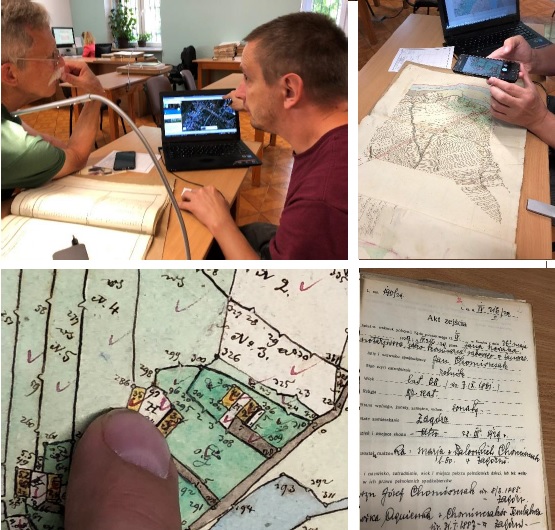 One more thing to check—the will of a Jan Homiszczak, but unfortunately he was not a direct relative.
We bid the archives farewell.

Next, we walked to the cathedral of St. John the Baptist—the Greek Catholic Church in Premysl. It was the religion of my grandfather’s family. During the Communist era, the church was banned. It reappeared after 1989 when Poles got their country back. “Z” said the colorful paintings of the apostles in the front of the church were there because peasants could not read—and these were like graphic illustrations for them to follow. 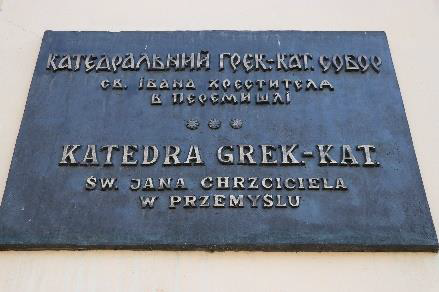 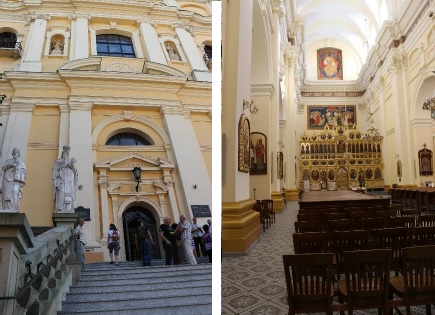 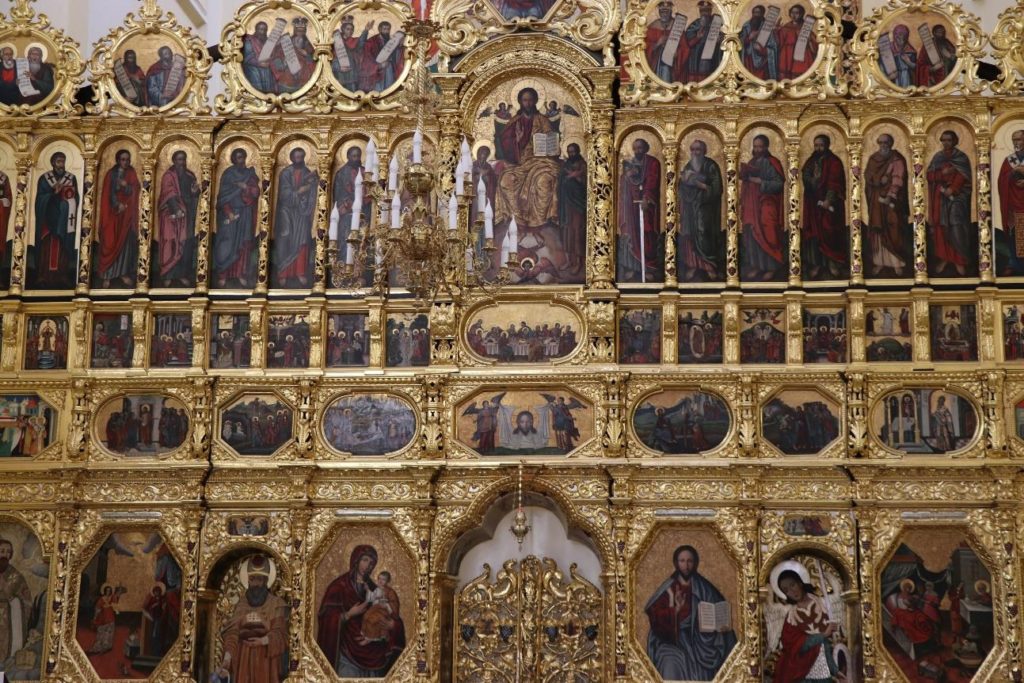 Leaving Premysl, we started driving toward Zagorz, now on country back roads, winding and picturesque.
In Zagorz—a small town of about 2000 people—“Z” went to speak to a woman who might know something about the Homiszczaks who at one time lived in the neighborhood. Where he got this information, he didn’t say, but he was like a bird dog on a trail.

The woman said the Homiszczaks had all died, but she said some people down the lane might know something. We walked to the front gate of a yard filled with gorgeous flowers. An old couple was sitting in the yard. “Z” engaged them in conversation. Yes, Homiszczaks had lived next door, but they were all dead now. The old man had been the best friend of one of them when he was young. They gave “Z” another lead.

Walking a short distance across a highway by the Oslawa River, “Z” found a man named Trzciniecki, a possible relative on my great grandmother’s side. While they chatted, Allan and I walked around the corner and down the road a bit to see the river and take some photos. I was thinking all the time—my grandfather looked at this river and stood on the bank on my right. Just amazing.

The man “Z” talked to sent us down a nearby lane to see a man named Homiszczak. Had we found a relative? No, at least not a direct one, but at least he was a Homiszczak living in Zagorz.

Back in the car, we drove down the main street of the village—out to the old Zagorz Cemetery on the edge of town. We spent the next hour climbing over and around the closely packed grave stones, through weeds—no mosquitoes, thankfully. 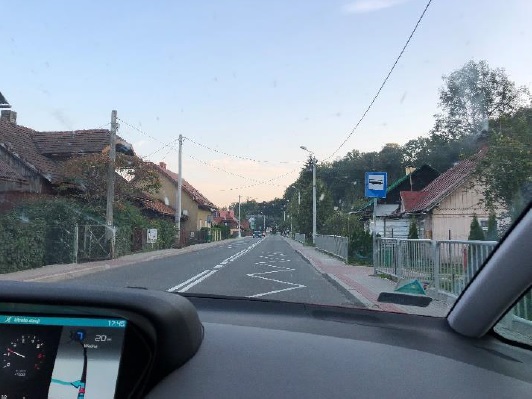 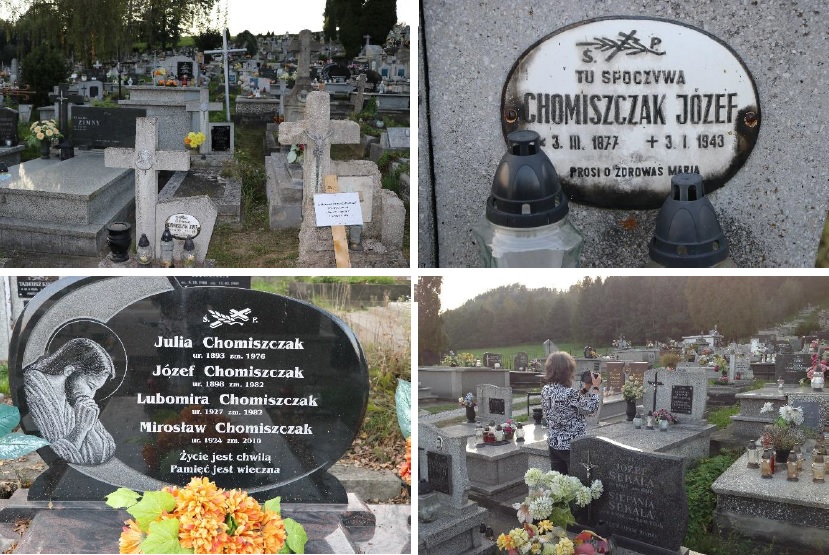 The three of us divided up the cemetery for the searching. There were a number of Homiszczak graves, but no names we could immediately connect to my branch of the Homiszczak family.

Losing light we headed back to Zagorz, pausing by the old Greek Catholic Church, now under renovation. It was probably the church my grandfather’s family would have attended. 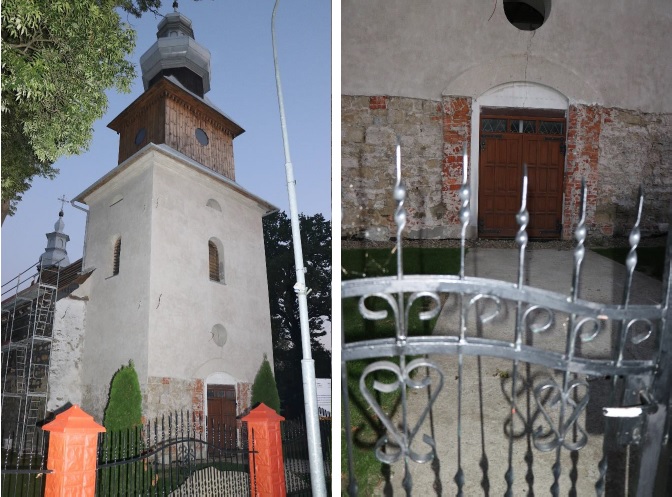 Now, on to Sanok 4 miles north where we would spend the night at a small hotel.

Part 2 of Johanna’s story will be published soon!