Daniel is already waiting for me in the hotel lobby in Warsaw. He arrived the night before, coming from Białystok to Warsaw. We quickly pack my belongings in his car and head out to the archive in Pułtusk. Daniel already identified a couple of records that might contain information regarding my Borucki, Budny, and Zabielski family surnames. 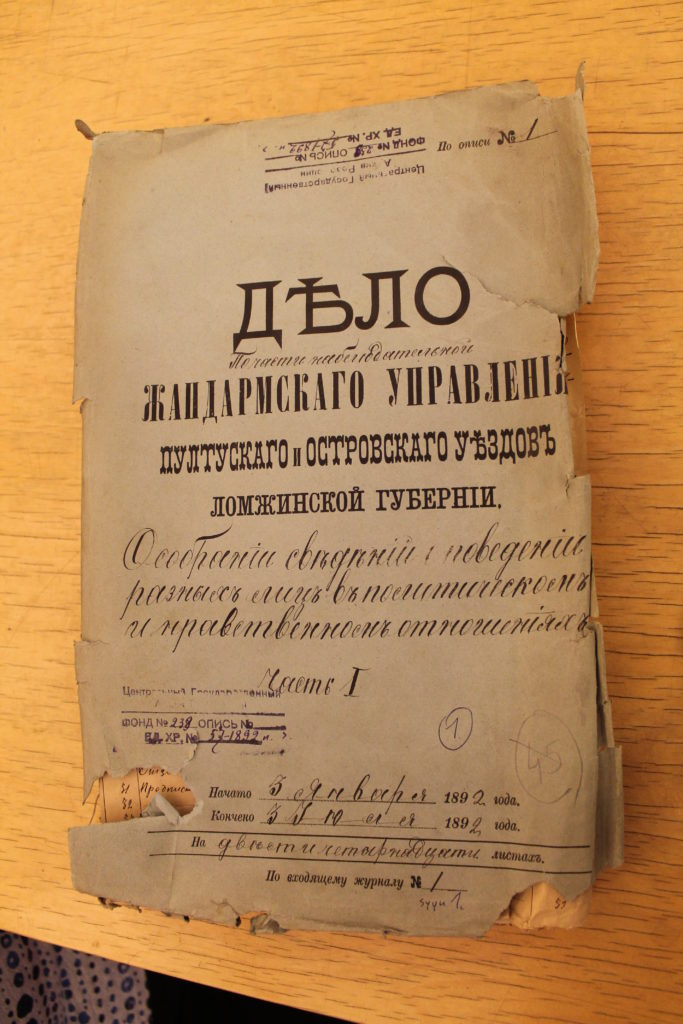 We had no luck with the documents. However, I did experience the bureaucratic red tape. The clerks at the archives are just as nitpicky about registration to access the records as they can be in the United States. The archives are in a former church. I filled out the registration forms on the first floor. Then went upstairs to have the records pulled to view. Daniel and I were again presented with another set of the same registration forms to complete. Daniel ask “why?” The response was “You’re upstairs, now!” Bureaucracy.

Pułtusk archives had a list of conscript soldiers for Maków County in 1892. Unfortunately, the record didn’t contain any Budny or Borucki surnames. We did jot down familial surnames that for future examination.

We proceed to Mamino. As we enter the village of Mamino, I recognized the windmill seen on Google Earth Maps.   Not sure what Daniel had in mind, he pulls into the driveway of the first house in village. Out of the car, he goes through the back gate, up the stairs, he starts knocking on the door.

A farmer from the field sees us and starts walking towards. From Daniel’s conversation with him, we learn there are no more Budny’s living in the village. The only Borucki family lives at the fourth house on the left up the road. The farmer, Mr. Chojnowski, invites us to come back tomorrow when his wife is home. She knows much more and can assist us then.

Daniel and I meet with Bolesław Borucki and his wife. Both Bolesław and his wife are descendants of Ksawery Borucki and Julianna Borucka (nee Budna). Ksawery and Julianna were witnesses on the birth and death record of Feliks Budny. Feliks was of Adam and Mary first child. Born in Mamino, he only lived a few months. I was truly hoping to find out if Julianna was related to Adam. I still don’t know if there is a familial relationship between Ksawery and Julianna, to Adam and Mary. We couldn’t find a connection on this trip.

Bolesław told a story, he heard from his mother in law. There was a Borucki family living here in the 1890s. He remembers the name of the former owner of this land was Ignacy. Mary did have an older brother named, Ignacy Borucki, who left Mamino to immigrate to America in 1896. Somehow, Ksawery became the owner of the land Bolesław and his wife live on today.

Bolesław goes on to say, that this Ignacy left, because it was discovered that he, Ignacy, was stealing and selling horses. Maybe my great uncle Stanley Budny learned his thieving skills from Uncle Borke (Ignacy Borucki).

We took up Bolesław ‘s offer to drive me around his farmland. There were several roadside shrines along the roads. Including one built by Ksawery in 1896. He also pointed out lands previously owned by the Borucki’s prior to the transfer to the Chojnowski family. There is a family story passed down in Bolesław‘s family, that another local farmer named Chojnowsk went to visit Ignacy in America. There was an agreement with Ignacy for this Chojnowski to acquire parts of the original Borucki land parcel.