After a very long drive from Tarnów to Warsaw the night before, we piled back into the car for another 4 hour drive to Lipsk and Kopczany to visit Wojtek and his family. Wojtek and I were put in touch a few years ago by Joe Baxer who visited the family about 20 years prior. Wojtek and I are not related by blood, but share family connections through Antonina Danilczyk, my great-great grandfather’s second wife. Joe recently visited them again this past spring. For the last few years, Wojtek and I have been exchanging information on family members over the internet and have been eager to meet each other in person.

We left Warsaw at 9AM and had planned to arrive in Lipsk around noon or 1PM, but we ended up being late due to one highway having traffic due to construction. They would close our lane while they let traffic through from the other direction and then stop them and let us through. This significantly delayed us. Due to this traffic, we were approximately one hour late and did not arrive until about 1:30PM. That evening, we would have to leave for the Lithuanian border by 4PM in order to meet our Lithuanian guide at 5PM (6PM Lithuanian time). Since we ended up leaving around 4:30 for the border, we only had about 3 hours with Wojtek and his wonderful family.

Arriving at Wojtek’s house, we were warmly greeted by him and his wife. He politely told us that we were at the wrong house and had parked in his neighbor’s driveway. We moved our car one house over. They had a beautiful house and as we entered, we noticed that his wife had already set the table for lunch. We all sat down to eat and chat while she began bringing out plate after plate of food. There were Cepelinai, chicken cutlets, a casserole, fried fish, some sort of cabbage dish, homemade compote from their own fruits, etc. It was such an amazing spread and I felt awful when we barely put a dent in the amount of food on the table. I hope they believe in eating leftovers! She then brought out coffee, tea, and an entire tray of desserts. It made me very thankful that I do not live in Poland. I would be incredibly happy, but also incredibly fat. Everything was just delicious!

Through our guide, we were able to discuss our families, occupations, exchange family stories, and discuss the plans for the day. Wojtek told us that he planned to bring us to the local cemetery where relatives were buried, followed by a visit to his parents’ house in Kopczany, show us the Poland/Belarus border (since he is a border guard), and bring us to the Pisanka museum (for which Lipsk is world famous). His wife’s aunt and cousin, Barbara, were Pisanka makers and Barbara would be able to give us a guided tour of the museum.

As we finished lunch, we took our dessert into the living room and exchanged information. He had put together a few items for me and I had brought a few items for him. In addition, we all exchanged gifts that we had bought for each other. Lunch and dessert were very short since we needed to quickly move through the planned activities. After taking a quick set of pictures in front of their house with their three children, we got into the car for a visit to the first stop, the cemetery. 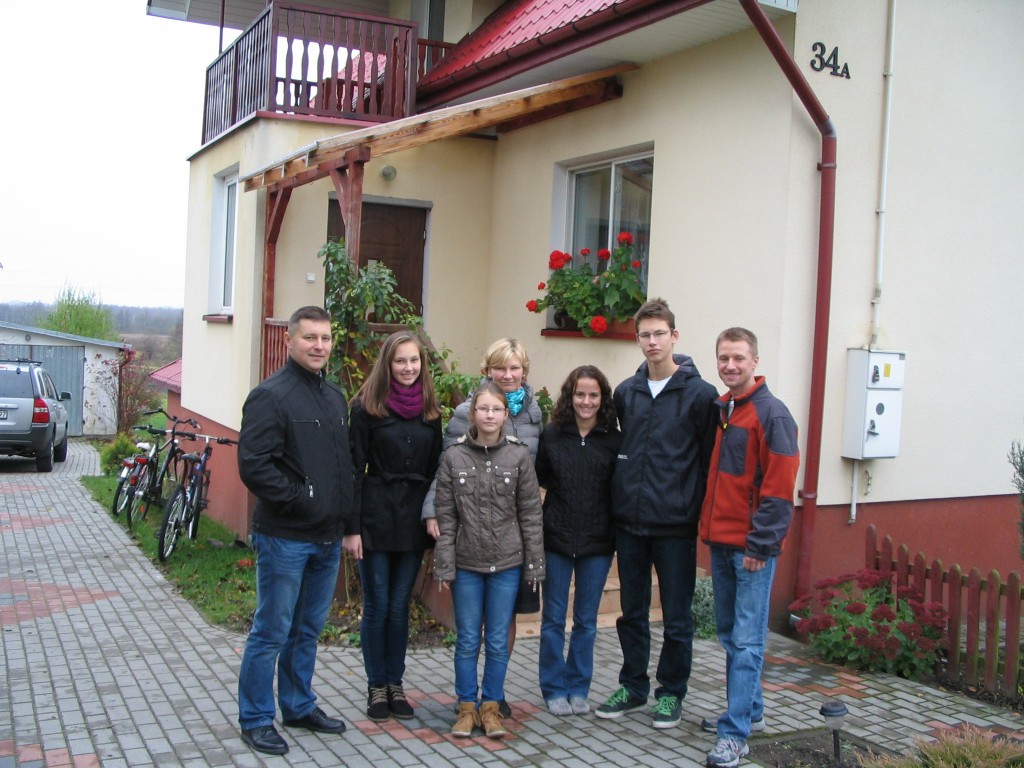 The cemetery was very beautiful, as are most cemeteries in Poland. Families take great pride in maintaining the graves of their relatives and this is immediately apparent. Flowers and candles abound while grass is kept short, areas are weeded and raked, and headstones are brushed and cleaned. As I said before, All Souls Day is a very popular day in Poland and the cemeteries were very busy when we visited since families were preparing the graves for this day. After visiting a few graves and taking a few pictures, we got back in the car to proceed to Wojtek’s parents’ house. 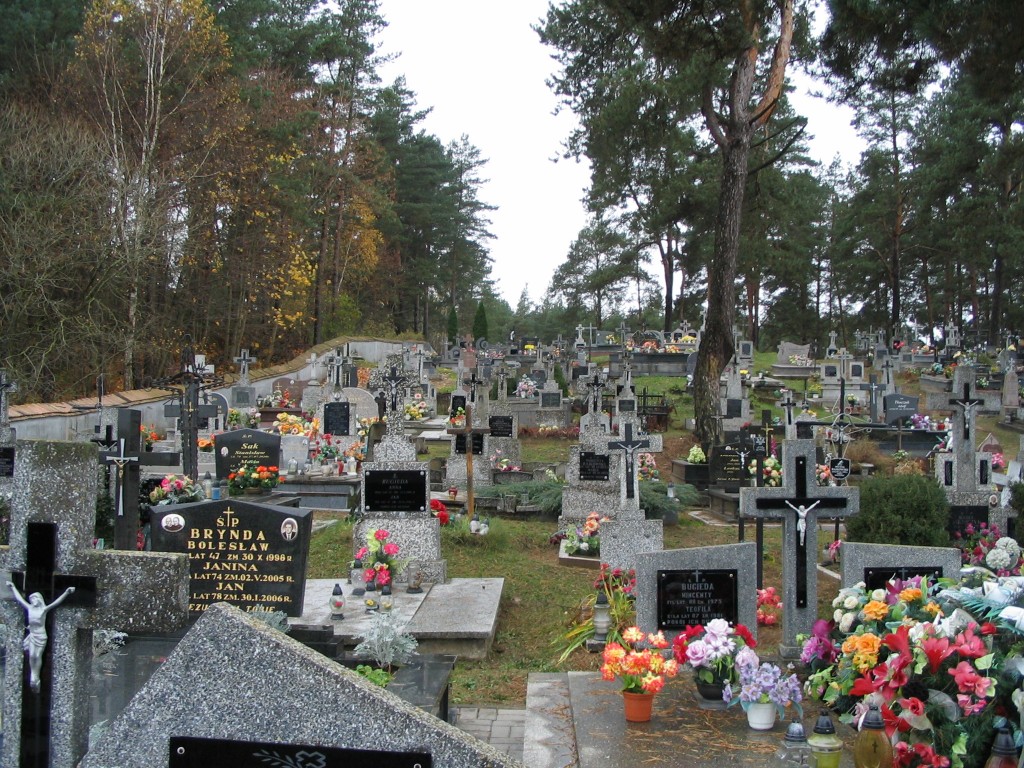 Arriving at the house, we were again greeted outside by his mother and father. Inside, his mother had prepared a spread of meats, desserts, and juices. The hospitality in this country is amazing; however, just having eaten lunch, very little was eaten. I had a glass of juice and a piece of dessert afraid of offending the family if nothing was touched. I may have to be rolled out of this country after all. This was the house that Wojtek grew up in. Since it seemed to be located in a very remote location, I asked what a child growing up in this area would do for fun. I asked if it was easy to “get in trouble,” but that phrase apparently doesn’t translate well into Polish since our guide did not know what I was talking about.

Wojtek explained that there was plenty to do in the area, but mostly he was required to help around the house. There were animals that needed attention, a garden to maintain, and many other household chores that were required. It seemed that he mostly attended school and worked the farm. As we sat in what I assumed doubled as the bedroom and living room, Wojtek’s parents explained how everything needed to be made by hand. The rug that was on the floor was made by the family as were the blankets, clothes, and many other items. Things were not purchased since there was very little money and no stores. Whatever you needed was grown or made at home. His mother took out a pair of socks that she made….from the wool that they sheered from their own sheep. We were all simply amazed that these things were still taking place. In the United States, these are becoming lost trades. People, seemingly in a constant hurry, prefer to visit Target, Wal-Mart, or some other chain store instead. She presented the socks to me as a gift. I wore them that night in the hotel and was surprised how soft and warm they were. 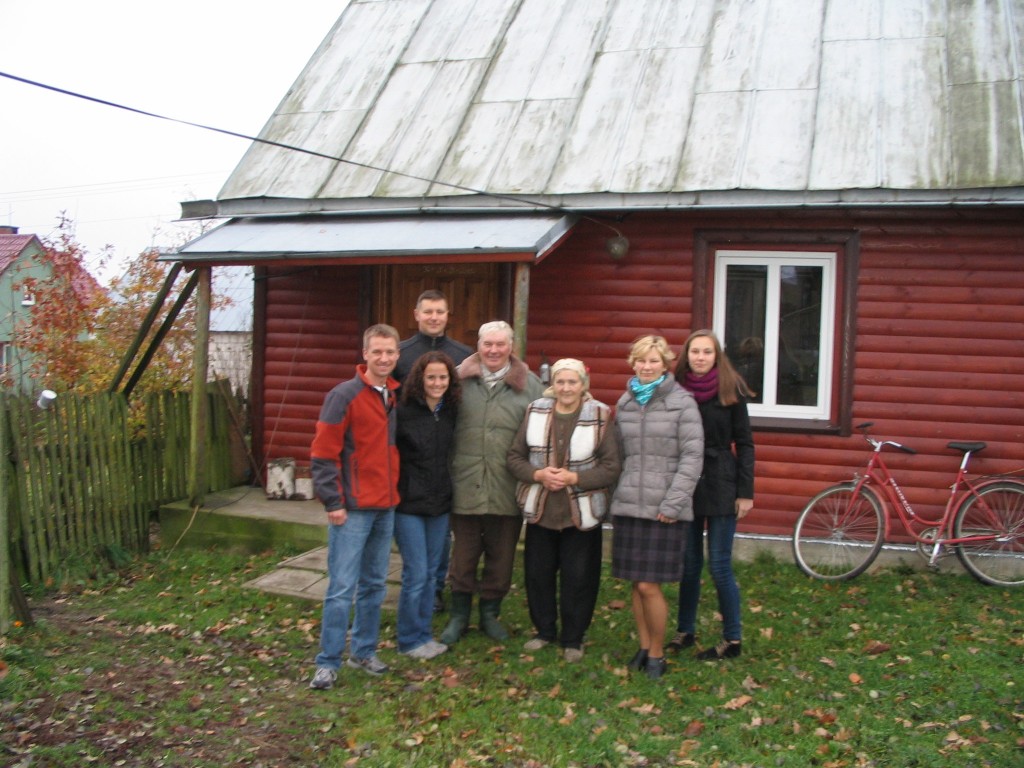 Again, this was a quick visit so that we could fit everything in. After some more conversation and pictures it was time to get in the car and head to the Poland/Belarus border.

The border didn’t seem like anything special. It simply appeared at the end of a dirt road. No guards in site, no fence or wires, just a handful of warning signs (which I had to take a picture of and “Google Translate” later). Since Wojtek is a border guard I was curious if they had many issues sharing a border with Belarus. He stated that the largest issue is not people from Belarus sneaking over the border, but people from other countries such as Afghanistan. 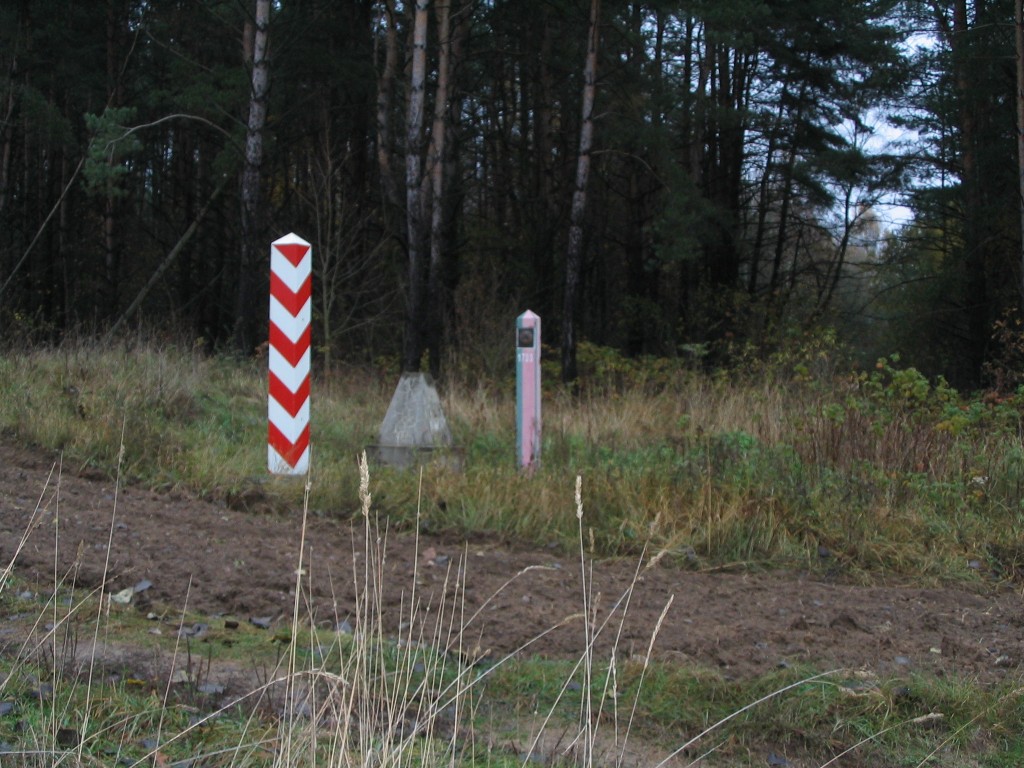 Everyone had a good chuckle when I pointed out that because of where Amy works, she is not allowed to visit Belarus and could possibly lose her job is she crossed the line. Americans also have a difficult time getting into the country and most websites advise American travelers to stay away.

Since we were standing almost directly on this border I also asked what the penalties were if you were found on the other side. Wojtek smiled and said “it depends who finds you.” If you are found by the Polish border guard it is a 500 złoty fine. I didn’t think that this sounded so bad. He continued, “and if you’re found by the border guards from Belarus, you are considered a spy and immediately thrown in jail for a minimum of 30 days with only bread and water.” I was surprised. Then he added, “and if you speak English, the conditions are significantly worse.” Ok, I thought. No “funny” pictures of me with one foot in Belarus for the photo album. On to the Pisanka museum.

We arrived at the museum a little before 4PM. This was going to have be a very quick visit. Walking inside, we could not believe all the display cases. These eggs were beautiful and we were glad that Barbara was there to give us the tour. She quickly showed us around, explained the process, discussed the different types of Pisanka that are made and also showed us the oldest Pisanka.

These were the eggs that were brown in color because they were made before the invention of colored dyes. They used different elements from trees to color the eggs (different shades of brown). Hearing her explanation and seeing the amount of detail in the patterns, I asked how long it took to make one. Perhaps it took an hour or maybe longer, I thought. “About 6 minutes,” she said. Well, I was a bit off. 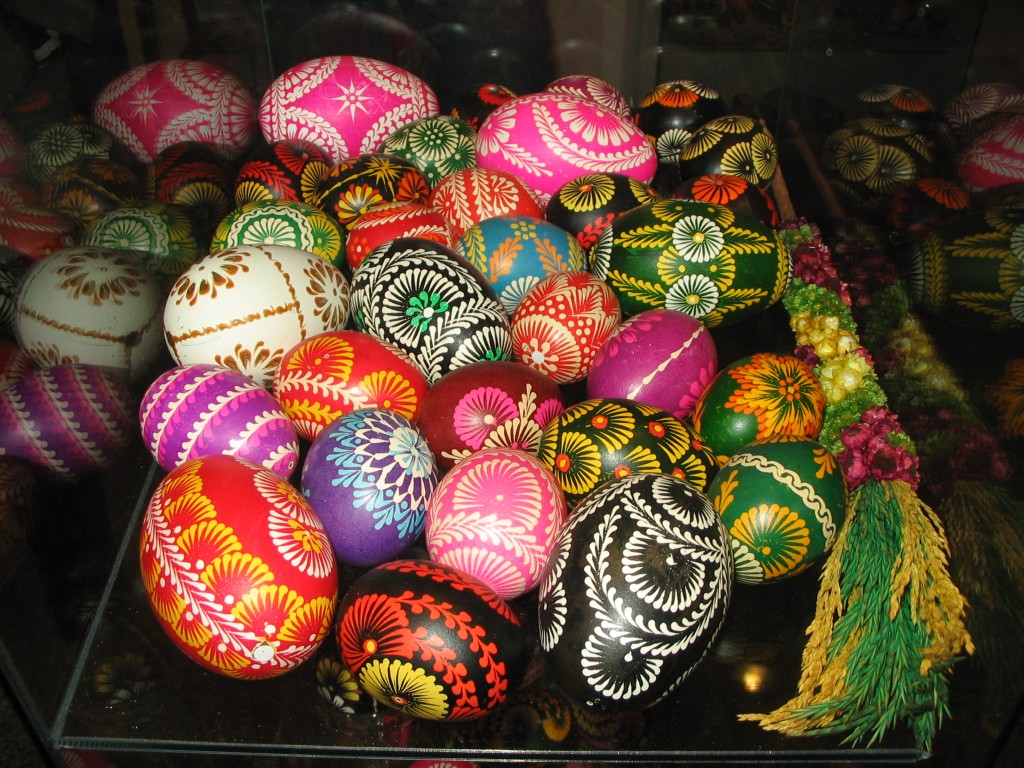 Within the museum were also old farm tools, costumes, furniture, etc. Some of these items were hundreds of years old and Barbara quickly pointed things out and ended our tour. If we had more time, she would have showed us how to make Pisanks and we could have made our own. Although I would have loved to try, it’s probably better that I did not have the opportunity to embarrass myself and create the ugliest Pisanka ever made!  That will have to wait until next time.

Outside of the museum, we thanked Barbara for her time and also said goodbye to Wojtek and his family. Although we had to speed through everything, it was the perfect ending to our time in Poland. Nothing can compare to homemade food and spending time with family!

We sped off towards the border with Zenon.  Arriving at the border about an hour late, our guide was already waiting for us. We quickly transferred our luggage to his car and said goodbye to Zenon. Although he does this for a living and has helped numerous people find relatives and research their families, he had become family during the last few days. He had shared in all the excitement of finding new people and visiting new places. He had been there when we didn’t find what we were looking for, but also when we found so much more than we expected.  Sharing these experiences created a unique bond and both Amy and I were sad to be leaving him. Nothing I could say could  sufficiently express my gratitude for his hard work and dedication. With tears in our eyes, we thanked him over and over and waved goodbye as we drove away.